Earlier this week, Aston Martin confirmed it would build 28 James Bond-themed DB5s, all of which will have secret-agent gadgets.

These include fake machine guns that pop out from behind the indicator covers – and cost a whopping £3.3million each.

But you don’t have to spend a seven figure sum to own a car with hidden features.

Plenty of used models for sale for less than £10,000 have secret quirks that you might not know about. And these 10 have been voted the best by those drivers in the know. 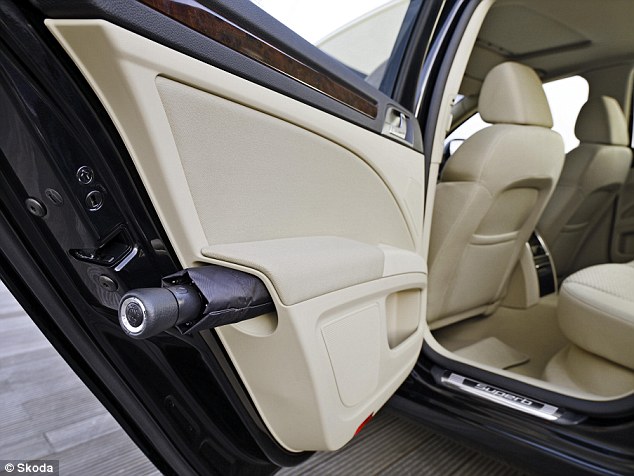 Rainproof Skoda owners: Skoda has been hiding umbrellas in the door panels of some of their models for years

A survey of motorists by automotive video service CitNOW identified the secret car features your car might have that you probably don’t know about.

Most of these have been around for some time, meaning you could buy a second-hand car with a gadget that’s never been used by the unsuspecting original owner.

The video provider, which helps dealers to showcase the models they are trying to shift from their forecourts with in-depth footage of the vehicles, said these features can improve the desirability of a car for sale, granted the keeper knows it’s there.

Ollie Parsons, head of sales at the firm said: ‘All these secret or fun features will delight a buyer who has bought a car before realising they got more than they bargained for.’

The poll of 2,000 UK drivers ranked the features in order of the ones people liked most.

Does your motor have any of these? 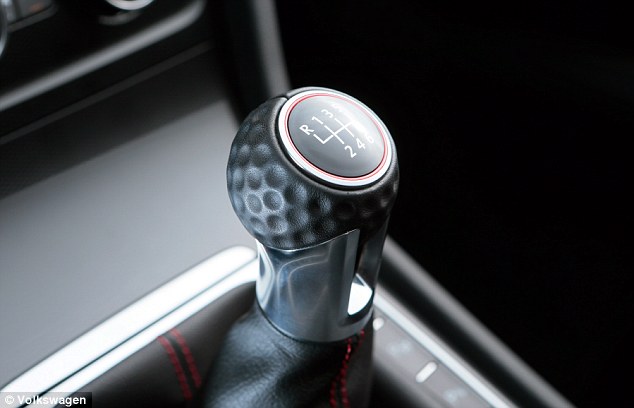 The Golf GTI is considered the mother of all hot hatchbacks.

But for those who have never owned one, you might not know the quirky feature that’s only installed in GTI variants.

Golf GTIs fitted with manual gearboxes for many years have a golf-ball gear knob – and it’s one of the most-loved features for enthusiasts. 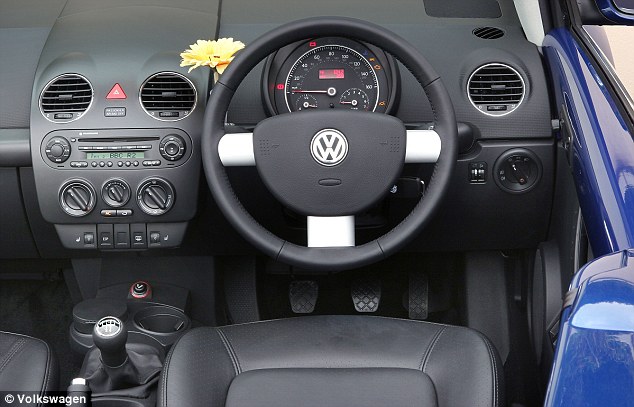 Beetles of previous generations featured a small vase on the dashboard 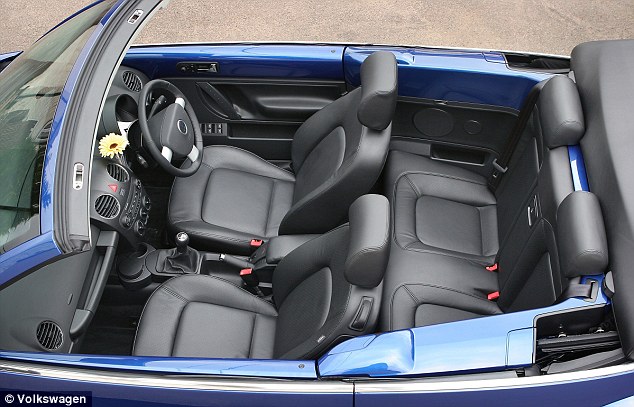 The vase has been removed from the latest generation Beetle, but was available in the model that preceded it

A factory-fitted vase in Volkswagen’s Beetle is nothing new – the German brand has been doing it for half a century.

While the latest generation model currently on sale did away with the feature, it was still a fixture of the model before it.

Traditionally, the small vase mounted on the dashboard should carry a flower – real or fake – but tends to be replaced with pens, cigarettes and lipsticks. 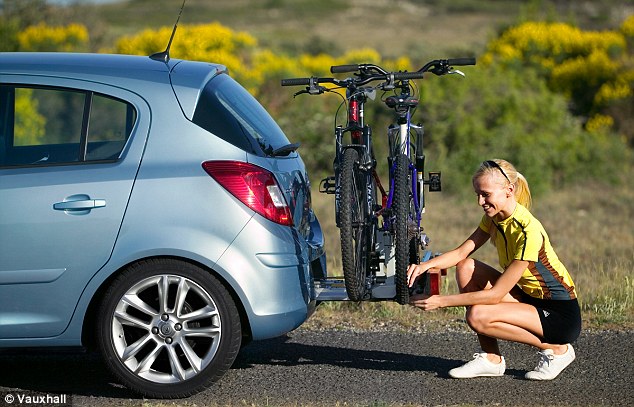 Bike racks tend to be the reserve of SUVs and larger vehicles, but Vauxhall would fit one to your dinky Corsa in the later 2000s – thought it was so tucked away a second-hand buyer might not know it’s there.

Called the FlexFit system, it’s disguised behind the rear number plate and is revealed once you lift a handle in the boot.

Pull it out, lock it in place, slip on the extra rear lights provided and you can load your bikes onto the back is no time at all. 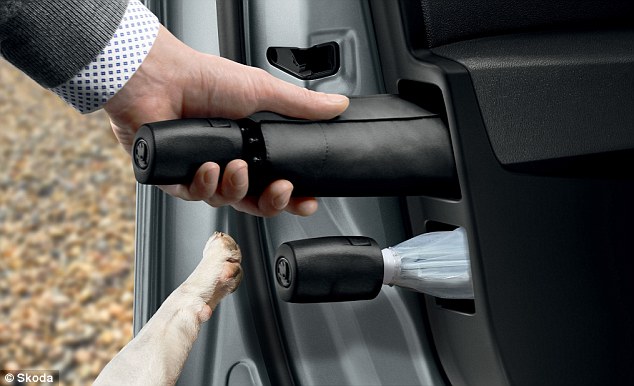 This is a feature best known to be available with half-a-million-pound Rolls-Royces, but budget-friendly Czech brand Skoda has it too.

Open the doors and hidden in the armrest is an umbrella.

While Rolls-Royce’s system has tiny blowers that also dry the umbrellas when put back inside after being deployed, this isn’t available with Skodas.

Later Skoda models also come with an ice scraper hidden on the inside of the fuel filler cap – perfect if you’ve left your de-icer at home and need to clear the car’s frozen windscreen. 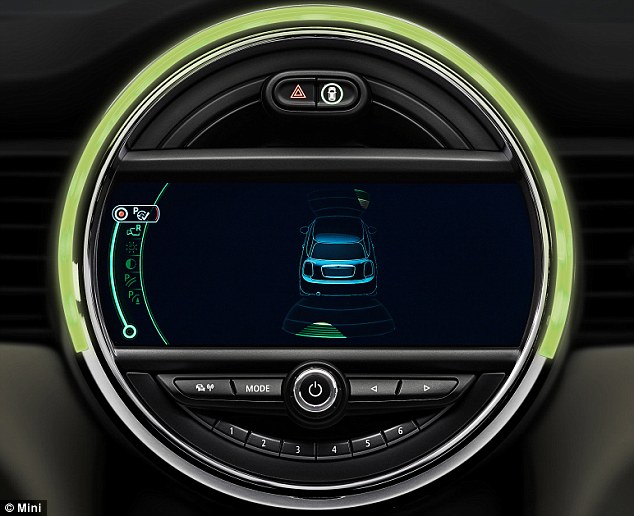 This is now a feature you can find in a number of cars, including BMWs and Mercedes, but was first introduced in Minis in the last decade.

Ambient lighting strips across the dashboard and around the door panels could all be tailored to a colour of your choice.

Not only does it mean you can match the lighting colour to the interior design, you can also adjust it to fit your mood on the move. 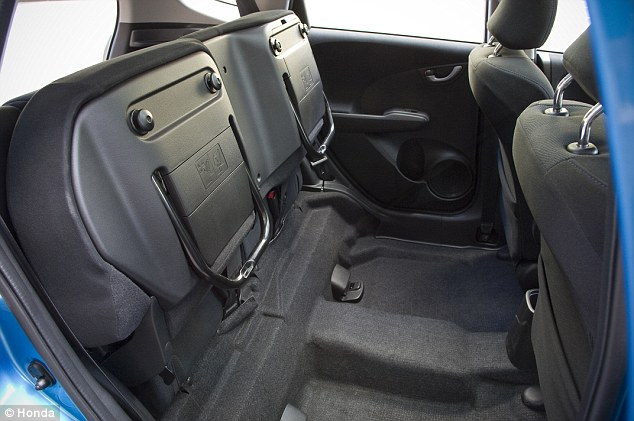 If you own a Honda Civic or Jazz and don’t know about this feature then you’ve been missing out.

The Magic Seat System lets you lift the back seat bases up so they stand vertically to free up load space.

Ideal for getting a pushbike width-ways behind the front-seat backrests or to carry potted plants, its one of features that has made Hondas the practical choice against rivals. 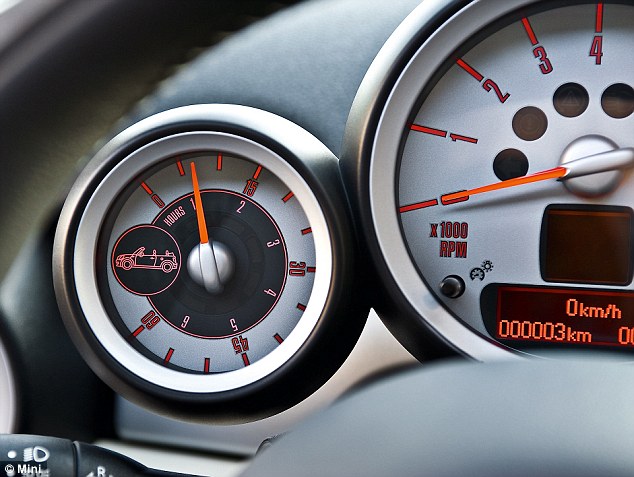 Back to Mini and a feature you might find on convertible models.

With the British weather limiting the time you spend driving with the roof lowered, it might be interesting to know just how long you’ve spent at the wheel with the wind in your hair (if you have any).

Mini’s Openometer will tell you exactly this period.

A gauge next to the speedometer records the time you’ve spent driving with the roof down. Fairly useless, but a good fact to bore your mates with. 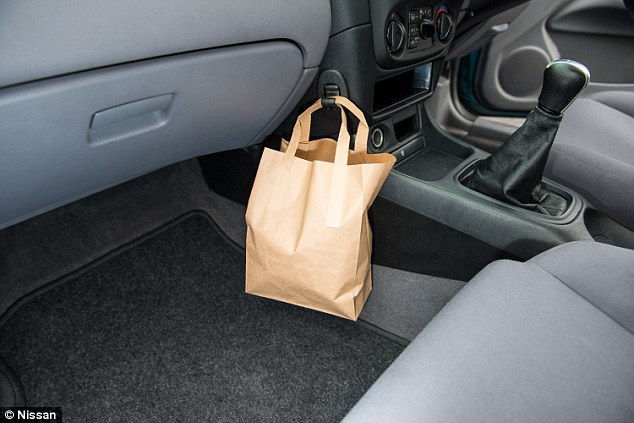 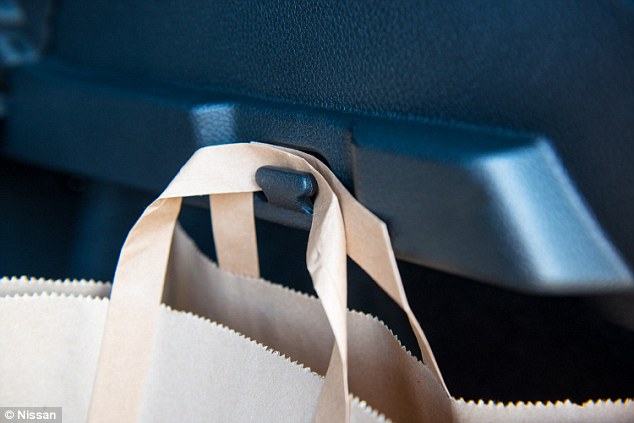 We’ve all been there – you’ve collected your tikka masala from your favourite Indian restaurant and, in your excited to get home to devour it, taken a roundabout too quickly and spilled your supper all over your footwell carpets.

Well, that’s a problem you won’t have in some Nissan models.

First introduced in the Almera back in 1996, a bag hook is handily located near the glove compartment lets you hang your bag of food so it never topples over.

Does James Bond have a curry hook in any of his gadget-heavy cars? We like to think so – and imagine his smug face when he arrives home with a lamb pasanda still intact after a chase with a villain. 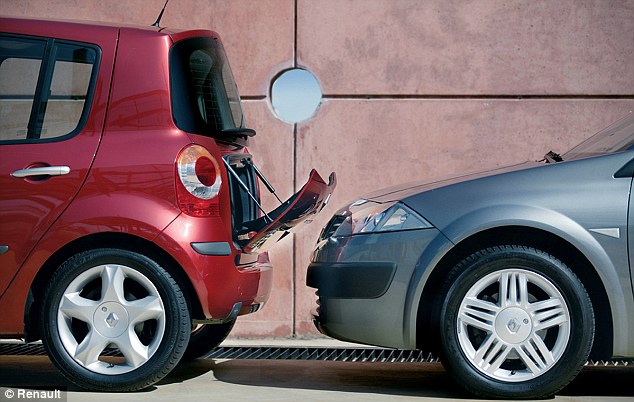 The Renault Modus – a family-friendly compact MPV – is long gone from the market, but it had a great feature many wouldn’t know about.

Ideal if you’re in a situation when someone parks right up behind your car or you’ve backed into a space with a wall behind it, the boot had a chute that could be open slightly.

The lower portion of the tailgate could be tilted down so you can get into the luggage area without having to lift the entire hatched boot door. 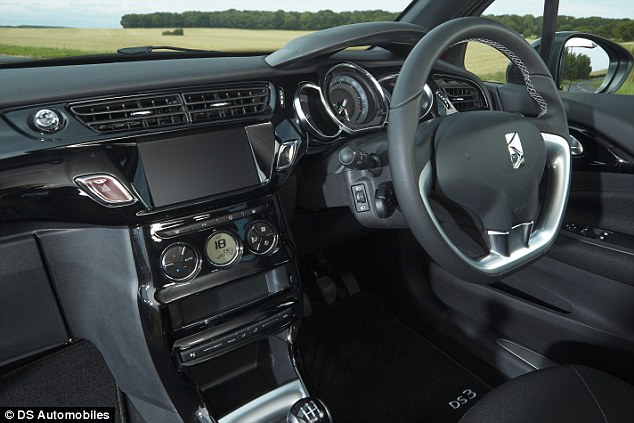 Many drivers don’t like the idea of air fresheners dangling from their rear-view mirror, obstructing their field of vision ahead.

Fortunately, you won’t need a scented tree or jelly bean dangling in front of your face if you own a DS 3 – or Citroen DS3 as it was previously known.

The supermini warm hatch comes with a handy little dial on the dashboard that lets you control the intensity of fragrance sprayed into the cabin, meaning you can have that new-car scent without being overpowered with pine fumes.