City Correspondent For The Daily Mail 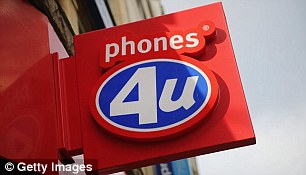 A £130million legal showdown is looming over claims British mobile companies colluded to sink Phones 4U.

PwC, administrators of the High Street phone retailer which went bust four years ago, are looking into whether O2, EE and Vodafone co-ordinated moves to end contracts with the chain in a bid to force it out of the market.

Lawyers at US firm Quinn Emanuel Urquhart & Sullivan have been hired to investigate, and £128.6million is also being held in reserve to fight potential court battles.

All three deny suggestions they colluded. PwC did not comment.