One of Europe’s biggest airlines has plunged into a fresh crisis after its boss quit amid a row over pay and strikes.

Air France-KLM shares suffered their biggest one-day fall in a decade after the firm’s chief executive said he would resign following the rejection of a pay deal by the airline’s staff.

Jean-Marc Janaillac’s attempt to cut costs at the carrier to keep up with competition from budget airlines and Gulf rivals ran into strong union resistance. 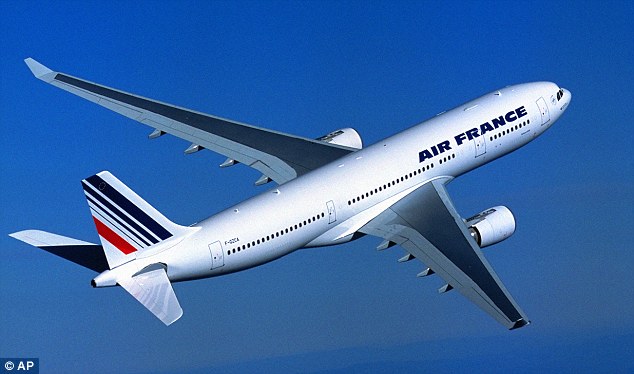 At the weekend, the government said the French state, the largest shareholder with a 14 per cent stake, would not ride to the rescue. Air France-KLM shares fell as much as 14.3 per cent in early trading, to their lowest level since April 2017.

Janaillac’s looming departure after his high-stakes gamble to put the pay offer to a vote by all employees backfired was the worst possible outcome, analysts at brokerage Bernstein said.

‘This leaves the company with no CEO, no labour contract, an ongoing dispute, and likely emboldened unions which will be even less likely to concede on their demands now,’ they said.

Air France said 15 per cent of its flights would be cancelled yesterday as pilots and cabin crew went on strike over the pay dispute for a 14th day since February.

Air France-KLM shares are down almost 50 per cent since the start of 2018, versus a 3.7 per cent gain on the broader Paris index.

Finance minister Bruno Le Maire urged the company and workers to resume talks on Sunday, delivering a blunt assessment of the future: ‘If Air France does not become more competitive… it will disappear.’

French unions have complained the company’s management is not serious about negotiations.

‘The absence of any dialogue is clear. No one has called me this weekend. There are still no meetings planned for further negotiations,’ Philippe Evain, leader of the SNPL pilots union, said.

Air France management had offered workers a salary increase of 2 per cent in 2018 and a further 5 per cent over the following three years.

The unions have demanded a 5.1 per cent raise this year.

But analysts say Air France is behind the times and has failed to stem losses. 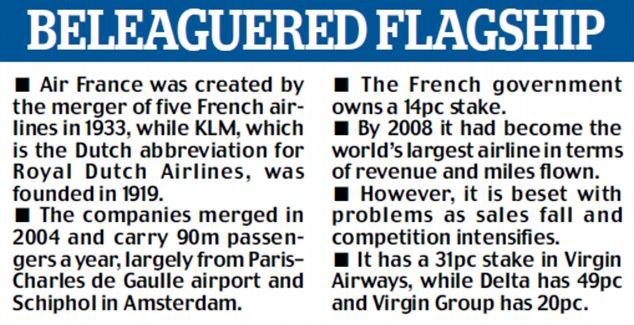 Air France’s balance sheet isn’t the strongest and last year it sought a £600m capital injection from Delta Air Lines Inc and China Eastern Airlines Corp, which both now own a 9 per cent stake.

The established elite of global aviation has come under intense pressure in the past few years from low-cost airlines that have eaten into their sales on regional routes, and from carriers in the Gulf States and more recently Norwegian, which has undercut fares on intercontinental travel.

Rivals such as British Airways and Lufthansa have already undergone heavy cost-cutting to compete with rivals.

Italy’s Alitalia filed to be put under special administration last May for the second time in less than a decade, starting a process that will lead to the loss-making airline being overhauled, sold or wound up.