ALEX BRUMMER: A last hurrah for Mark Carney might be a smart move for post-Brexit Britain

The last few months have seen the public profiles of candidates to be next governor of the Bank of England on the rise.

Ante-post favourite Andrew Bailey, chief executive of the Financial Conduct Authority, has made himself more available for interviews and briefings.

Respected economist and former central banker Raghuram Rajan was recently a trumpeted guest in the City. 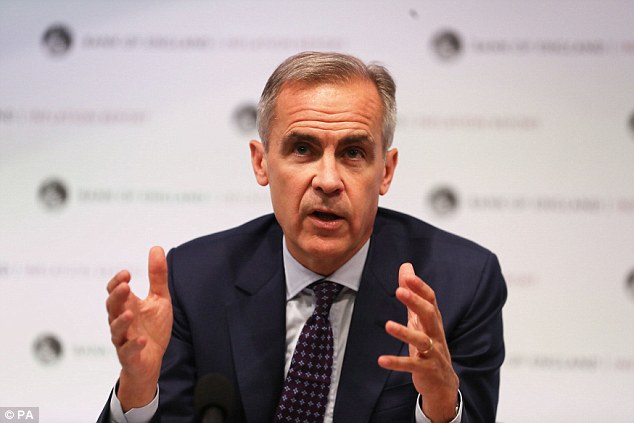 Plea: It has been reported that Chancellor Philip Hammond has reached out to Bank of England governor Mark Carney asking him to hang on until 2020 rather than leaving next June

Shriti Vadera, chairman of Santander UK, and other potential women candidates have been widely bruited.

Now comes the suggestion in George Osborne’s Evening Standard that Chancellor Philip Hammond has reached out to governor Mark Carney asking him to hang on until 2020 rather than leaving next June.

It would certainly make sense rather than departing just three months after the Brexit deadline.

As well as keeping the pound and banking system safe, Carney also fully understands the critical importance of the City and its earnings to Britain’s economy.

If approached Carney might well answer that there is no good time for a central bank governor to go. All that an extension would do is put off a tough decision.

The timetable for advertising the appointment has already slipped with Hammond originally planning on July this year.

Moreover, the Chancellor is keen that Carney’s replacement has the same kind of global clout as the incumbent and people sit up and listen when he or she enters the room.

Carney’s sense of public service could lead him to delay. It might also mean that other doors for jobs in his native Canada or Washington have opened by 2020.

The dominant sector of Britain’s economy is services, making up 79 per cent of output.

The tendency is to denigrate this and suggest all that citizens do is cut each other’s hair, hang around in coffee shops as they did in the 17th Century (when the London Stock Exchange and Lloyd’s of London were established) and feast on the success of Harry Potter.

But it is also the case that some of the fastest growing, but least understood firms in the FTSE 100, are about services.

Among those is Bunzl which supplies services to the food and drugs industry and is expanding rapidly. It has just added Norway to its portfolio, buying a food service outfit with 11 locations.

Another unsung services group is DS Smith which collects waste from grocers across Europe and turns them into snazzy corrugated boxes for online shoppers.

In the first half of the year Bunzl outperformed analyst projections with pre-tax profits of £257.9million.

Sales growth was driven by acquisitions although organic expansion at 5 per cent looks good enough.

With a market value of £7..6billion Bunzl’s unglamorous work of supplying napkins, cleaning products and a host of other services including logistics is paying off.

Sometimes it is better to be a little below the radar. Bunzl has a history of overpaying it bosses and there was a substantial 26 per cent vote against the pay of former chief executive Michael Roney in 2016.

There are questions as to whether lessons have been learnt with his Dutch successor Frank van Zanten offered a generous incentive package in a company with a vast majority of lowly paid staff.

Van Zanten arrived at Bunzl as a result of a takeover of his Dutch company and rightly has recognised the cultural importance of moving with his family to Britain as boss of FTSE 100 enterprise.

Pity the new boss of the Royal Mail Rico Back failed to make the same commitment.

It says something about the durability and prestige of Aston Martin that in its first century of ownership it went bankrupt seven times and that in its current period it has changed hands many times but endures when many other marques have disappeared.

Now with the assistance of James Bond branding, German electronics and Mercedes-AMG engines the current Italian and Kuwaiti owners think the time is right for a stock market float.

The appetite for investment in luxury cars is demonstrated by Ferrari, which is now valued on the Nasdaq at £19billion and is producing the highest returns on capital in the whole automotive sector.

The flotation could put a value of £5billion on one of Britain’s heritage brands underlining the merit of the country’s design and marketing skills.