This was meant to be the week when interest rates rose to coincide with the Bank of England’s May inflation report. The caution to the markets by its governor Mark Carney at the International Monetary Fund last month that a rise is not in the bag looks to have been on the money.

Recent data history shows that the British economy struggles to gather momentum in the first quarter.

This year has proved worse than previous periods partly because of the cold spell. But GDP expansion of 0.1 per cent means that the output was barely above water. 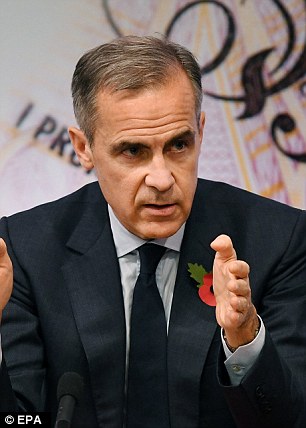 More disturbing has been the April data. In spite of optimism around export orders (a result of sterling competitiveness) manufacturing as measured by the purchasing managers index (PMI) – a closely monitored indicator – slipped back.

More significantly perhaps the services sector PMI, which makes up more than 70 per cent of the nation’s output, also stumbled.

Indeed, the only PMI showing a sign of life is construction, until recently the laggard. Moreover, with consumer price inflation falling slower than expected, the case for an immediate rate rise on Thursday is fading.

If there is reason to be worried about an uptick in prices it comes from oil prices, which last week surged above $70 a barrel.

As well as acting as a tax on every household and business, oil prices are often used to justify higher utility bills.

Only last month the chief economist at the IMF, Maurice Obstfeld, was forecasting that 2018 would be another good year for global growth, marginally raising his forecast to 3.8 per cent. But the mood music from the Fund is deteriorating. Aside from the UK’s disappointing performance, the eurozone has taken a turn for the worse.

Its output in the first quarter slipped and its PMI fell to a 14-month low in April.

Questions are being raised as to whether the European Central Bank has been too quick to run down its quantitative easing, the bond-buying programme, which has propped the zone up in the last two years.

Other negative factors loom. The in-limbo US-China trade war is not of overwhelming significance as the trade is a small fraction of global output, even if the announced retaliatory measures against US farmers were to be acted upon.

But monitoring by the IMF and others suggests the uncertainty is affecting international business confidence, with multinationals holding back on capital investment. That doesn’t seemed to have stopped big enterprises from seeking to take advantage of end-of-cycle, low global interest rates to pursue heavyweight mergers, such as T-Mobile-Sprint in the US and Sainsbury’s-Asda. There are also worries around global debt, with debt levels among some of the poorest countries having soared to 40 per cent of GDP, threatening a potential crisis.

A further danger is the non-bank debt levels in China.

In Britain we should not become too gloomy, despite the incessant debate about Brexit. Most of the larger FTSE companies already act as if Leave is a done deal and are making decisions on that basis.

The public finances are better than expected, which means that if the economy should slow there is fiscal headroom for the Chancellor Philip Hammond who is committed to do more for public services.

Some normalisation of interest rates will eventually become necessary. But this is not the right moment, with the UK economy in danger of stalling and the rest of the world, except the US, losing altitude.

The interest rate-setting Monetary Policy Committee should hold fire until we know a great deal more about the current quarter.