ALEX BRUMMER: Italy’s debt threatens the future of the eurozone

The populist coalition of the Right-wing League and Five Star Movement in Italy has quietly dropped a euro exit clause, averting an immediate fresh crisis for the eurozone.

Nevertheless, Italian bond yields are climbing. The interest rate on two-year bonds jumped ten basis points to 0.23 per cent and the yield on ten-year bonds hit 2.30 per cent.

The higher cost of borrowing reflects fears that League leader Matteo Salvini still wants out of the euro and will play havoc with fiscal policy even if technocrat prime minister, lawyer Giuseppe Conte, a political naïf, is in charge.

Reality is that escape from the eurozone is extraordinarily difficult. The single currency payment system, Target2, shows Italy enormously in hock to the European Central Bank. 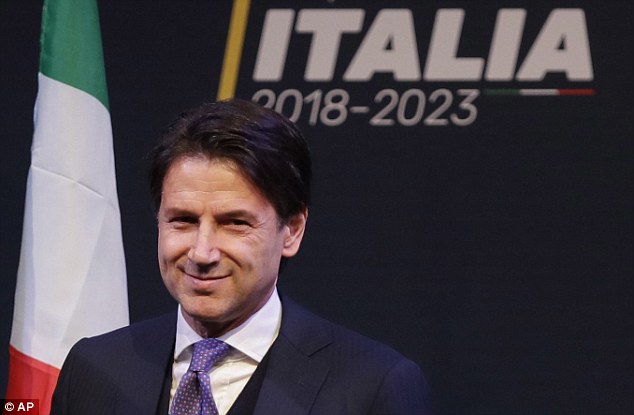 Germany refuses to acknowledge that the euro area is a transfer union in which richer nations or regions support poorer areas. But that effectively is what Target2 has been doing.

Professor David Blake of City University says that Italy has been using Target2 precisely for this purpose, and this has led to a loss of confidence in the domestic banks with citizens transferring balances to surplus countries. Effectively the ECB and Germany have Italy over a barrel.

Recent figures from Euro Crisis Monitor show that, in March, Italy had a deficit of £357billion with the ECB, which is the highest in the euro area. Germany, in contrast, had surpluses of £717billion.

Extricating Italy from the eurozone could only be achieved if Rome repudiated its enormous deficit with the ECB as well as its international debt.

Faced with that choice in every year since 2010, crisis-hit Greece, at disastrous social cost, has stuck with the euro area.

It is difficult to see Italy’s populists breaking the mould set by Syriza progressives in Greece. But madder things do happen in Argentina and Venezuela.

Willie Walsh is a hard chief executive to shake-off, as airline trade unionists have learned. So far the efforts of British Airways owner IAG to woo no-frills transatlantic rival Norwegian have fallen on deaf ears.

What BA wants to avoid is Norwegian falling into the hands of one of its competitors, undermining its position as the dominant carrier and price setter.

Leaks to the Spanish press that Walsh is preparing a third tilt at Norwegian, offering some $40 a share, which would be a premium of 32 per cent of the current share price, are more fantasy that fact.

But no one should doubt that IAG is serious in its pursuit of becoming a significant player in the discount market.

Oslo-based carrier Norwegian is far from financially secure. It is seeking to bolster its balance sheet with a share placement and to move from owning its planes to leasing them.

Anecdotal evidence about Norwegian suggests passengers are willing to buy their own water and gladly upgrade in exchange for legroom on red-eye flights.

BA has shown a capacity down the years to mop up interlopers, from British Caledonian to British Midland. Norwegian may prove a harder nut to crack but we shouldn’t underestimate Walsh’s staying power.

Theresa May did the vision thing in a speech on Britain’s science and industrial future delivered at Jodrell Bank. She mined great names from our science and engineering past as inspiration for the future.

Consumers will blink with disbelief at her strategic vision of faster trains, better roads and faster broadband – none of which appears to be happening.

The core of her promise is that Britain will set a goal of spending 2.4 per cent of total output on research and development by 2027.

Nothing could be more necessary, given that despite the patent box and other tax breaks in 2016 the nation spent only 1.67 per cent of GDP on R&D. That is far below the European Union average of 2.03 per cent.

If ever there was a moment when Britain needed to step up R&D spend with urgency it is now. With Brexit looming, waiting until 2027 is ludicrous.

A country which allows advanced engineers such as GKN to fall into the hands of cost-cutting financial engineers ignores the great history which the PM evokes.