Germany has a difficult relationship with Anglo-Saxon capitalism. Frankfurt competes with New York, London and Asian financial centres but when the going gets tough, turns in on itself. As a country it is much happier making things – even if that means cheating on car emissions – rather than financial services.

The retreat by Deutsche Boerse from a merger with the London Stock Exchange was as much about unhappiness among politicians and authorities in Hesse – the federal state where you find Frankfurt – as anything else.

Now there is a similar fightback against investment banking at Deutsche Bank. 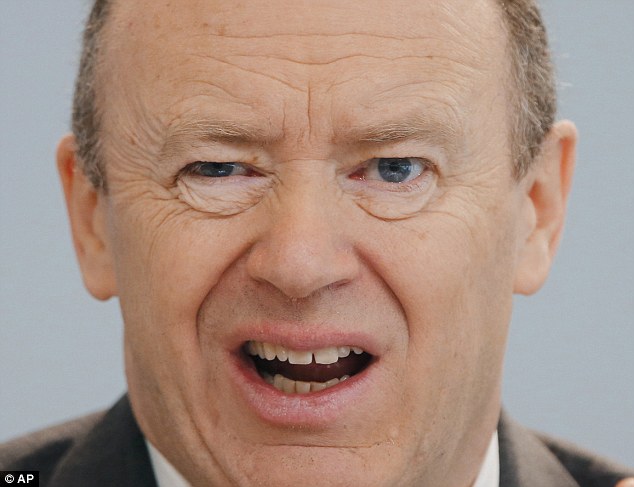 Painful: John Cryan has been unceremoniously dumped and replaced by German Christian Sewing

Cryan’s ousting is not so much about nationality as identity. Deutsche has spent two decades since it bought New York’s Bankers Trust seeking to establish itself as a European investment banking powerhouse. But it has never recovered from the financial crisis.

Changes in the last 48-hours are reminiscent of when Barclays turned to lifer Antony Jenkins after Bob Diamond, only to find putting a retail banker in charge of a universal bank was a grave error. Three short years later Jenkins was out on his ear and Jes Staley was brought in and refocused on restoring the investment bank.

The main difference between Deutsche and Barclays is that the German bank lacks the huge retail and credit card franchise.

Deutsche has largely been a commercial bank servicing big and mid-sized firms. Those services include foreign exchange, advice on mergers and raising debt. Dropping investment banking, as is being suggested, could damage the whole franchise.

The City has reason to be concerned about the fate of Deutsche Bank since it employs 8,700 and does a great deal of work for European companies out of London. So it is a core part of the City’s infrastructure. It would also be worrying if Deutsche followed the examples of the Swiss banks, RBS and others by pulling back from investment banking and leaving it to the Americans.

The person to blame for the chaos at Deutsche is chairman Paul Achleitner, who was reluctant to let Cryan get on with the job he was hired to do.

His head will be next to roll and his replacement will determine if the investment banking dream can be fulfilled. Wall Streeter John Thain, recently added to the supervisory board, could be an inspiration.

Good to know that while the City claque stands solid with Melrose Industries, the commitment by GKN to innovation is undimmed. Autocar reports that a young British engineer Henry Jackman-Day is leading tests of GKN’s new Driveline smart torque vectoring system on an ice track in Arjeplog in northern Sweden.

Among vehicles deploying the technology at present is the Jaguar E-Pace. But both Ford and Vauxhall have plans to use it on highly tuned sports models.

Melrose has made legally binding commitments on R&D but has been vague about how much it will be spending on the future of Driveline, at the core of GKN’s automotive enterprise. Melrose has pre-announced that it aims to rapidly improve margins. Development of new technologies is unlikely to be a high priority. Indeed, under Melrose control GKN will be sitting on a debt mountain of £1.4bn which already has led to a downgrade in its credit rating.

As Morgan Stanley warns in a just-issued note, ‘the private sector is leveraging aggressively, and excesses are building’. The Federal Reserve and the Bank of England have both pencilled in interest rate rises and the European Central Bank is cutting back on quantitative easing.

Not entirely comforting for holders of Melrose shares and debt.

Good to see Xavier Rolet, architect of growth at the London Stock Exchange, has landed his first job since being hurriedly dispatched.

As an independent director of Russian fertilizer group Phosagro, he will be able to keep a close eye on one of Vladimir Putin’s close associates, Andrey Guryev, who controls 71 per cent of the stock.

Guryev was the fortunate beneficiary when Putin took against tycoon Mikhail Khodorkovsky when he started meddling in politics. Khodorkovsky ended up in the Gulag and his group was dismantled.

Phosagro has prospered on the back of American sanctions which have made it a dominant force in the domestic market.

Rolet should be well trained for combat after the blood letting at the LSE.