Much of Marks & Spencer’s recent investment, including the much vaunted Castle Donington warehouse and the carefully crafted website, has failed to produce the transformation it had promised.

So let’s start again. The zig-zags have been expensive for investors, with the company gobbling up £1.4billion of exceptional charges in the last seven years.

The latest results are no different, with £514.1million of adjustments, ranging from the costs of store closures to IT restructuring.

There also looks to be confusion about who is driving this clattering train, with chairman Archie Norman and chief executive Steve Rowe doing a Morecambe & Wise act at the London Stock Exchange. 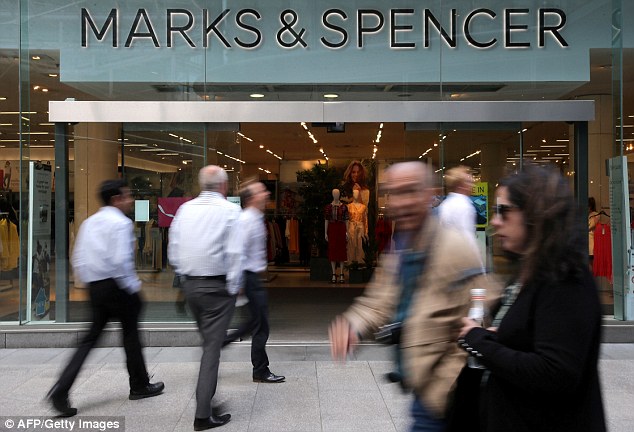 Fortunately there is enough loyalty to the brand that customers will carry on shopping through the self-flagellation and keep tills chinging.

M&S’s threat is not Amazon, as so many claim, but itself.

An obsession with putting fashion first means it no longer does the basics properly ranging from durable school clothes to the placement of seams in women’s undergarments.

The failure to see the online revolution coming and to make interim arrangements has cost it dearly.

That it is hardly out of the starting gates when it comes to online food delivery is a betrayal of customers.

In spite of all this, in a tricky year on the high street with household incomes squeezed, business rates surging and competition intense, a 0.3 per cent drop in same-store food sales and 1.4 per cent decline in clothing and home are far from disastrous.

Maintaining growth with a shrunken store portfolio will be a struggle unless it gets online, stocking and distribution right soon.

But with free cash flow of £471.5million before a maintained dividend this is not a company with existential problems.

Norman and Rowe will need to improve their dance routine to keep the show going. But they haven’t fallen over yet.

The last few months have been huge for Barclays.

There was an unexpectedly lenient £1.48billion settlement with the US Justice Department, chief executive Jes Staley escaped a red card over a whistleblowing case and it escaped criminal prosecution over the Qatar funding a decade ago.

That leaves iconoclastic trader Edward Bramson as the main irritant.

Faced with Bramson bearing down, it is not surprising that chairman John McFarlane has explored solutions. This included an informal contact with perennial takeover candidate Standard Chartered.

Both banks have been through bad times and are not fully recovered. Putting two weakened institutions together doesn’t create a financial powerhouse.

Moreover, it would represent a change of direction for Barclays. It has spent the last few years simplifying global operations.

As welcome as it might be to be part of Stanchart’s Asian adventures it doesn’t make sense for Barclays to return to Africa.

So what to do about Bramson? Barclays is clear that its role as Europe’s last standing full-service investment bank is worth preserving and it continues to work with major US clients, including drug store chain CVS and motor industry pioneer Tesla, on deals and fund-raisings.

If forced to discard trading desks Barclays reckons client relationships would be put at risk and the field left to US domination.

The bank is recruiting useful friends to keep Bramson at bay. Among big investors, Larry Fink at Blackrock looks a likely ally.

It owes Barclays a big debt of gratitude having bought Barclays Global Investors (BGI) at a knockdown price at the time of the financial crisis.

BGI enabled Blackrock to become the passive and exchange-traded funds colossus of our time. Investors in too many UK financial groups – F&C, Alliance Trust and Electra to name three – have bent their knees to a Bramson onslaught.

Amid the car crash in outsourcing and the struggles of the rest of the engineering sector, Babcock offers a rare of hope.

Turnover is up and order books still healthy in spite of the impending end to its work on Britain’s Queen Elizabeth Class aircraft carrier programme.

That’s a bit of cheer for chairman Mike Turner after losing the bitter battle for GKN’s future.