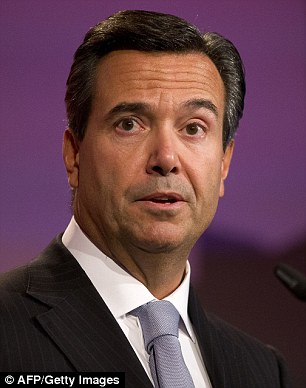 Lloyds bank chief Antonio Horta-Osorio must yesterday have wished that he was parading at the Chelsea flower show or at the Buckingham Palace garden party rather than on display at the annual general meeting in Edinburgh.

If he and chairman, Baron Blackwell, expected hosannas for the transformation from basket case back to ‘landmark’ profits of £5.3billion in 2017, they will have been bitterly disappointed.

The Portuguese chief executive may have done a fabulous job in restoring Lloyds balance sheet.

The bank’s healthy profits are as much to do with having the country’s largest legacy mortgage book and the greatest share of current and savings accounts as a result of the Gordon Brown-sponsored merger with HBOS a decade ago.

For all his qualities, he lacks the common touch. As shareholder advisory service ISS points out, his pay package of £6.42million for 2017, 11 per cent up from the previous year, is unduly complex and nearly 100 times that of the average employee at the bank.

It is not much liked by investors either, with 20.78 per cent dissenting. That ought to be enough to send Blackwell and the pay committee back to the drawing board.

If the revolt were not bad enough, Lloyds also has to contend with an onslaught from game show host Noel Edmonds, who alleges that his Unique Group was ‘groomed, pillaged and destroyed’ and scores of jobs lost as a result of the fraud at the HBOS Reading branch.

Lloyds has established a procedure for settling claims but many of those affected by the scandal see the bank’s response as slow, grudging and insufficient.

Even more worrying is the lingering scent of cover-up. Six HBOS Reading bankers were jailed on fraud charges last year.

The bank’s role is being scrutinised by the National Crime Agency and regulator the Financial Conduct Authority.

The Black Horse may be galloping again. But it is not moving fast enough to escape a tawdry past.

When it comes to pay, BT chief Gavin Patterson is not in the Horta-Osorio league.

But, like the Lloyds boss, Patterson runs a company with enormous endowment income – in his case from landline rentals, control of the exchanges, poles, ducts and masts providing much of the nation’s broadband and mobile telephony.

There will be much gnashing of teeth at the sight of Patterson being enriched with a £2.3million pay packet, up on £1.3million last year when he was stripped of his bonus for failing to meet customer service targets.

Investors might rightly wonder if the jump is justified given the shares have fallen 35 per cent in the last 12 months and stand at a six-year-low.

Employees might feel aggrieved in that the centrepiece of reorganisation is a savage 13,000 job losses.

Customers might look with suspicion at the fact that part of the bonus relates to improved customer service. Ofcom data suggests that BT is below best in class.

The programme of re-shoring customer service is 85 per cent done but will not be fully completed until 2020. Too soon to be spraying the bonuses around.

Retailers may have to reach for new excuses for high street mayhem. Squeezed household incomes had no impact in April when retail sales surged by 1.6 per cent against the consensus forecast of 0.7 per cent.

Given that shopping is worth just under 20 per cent of the nation’s output, the latest data could be worth as much as 0.2 per cent to growth in the second quarter after a lacklustre first three months.

There is a huge variety of performances. Fleet-of-foot firms have been able to trade strongly through the squeezed incomes, snow and the perceived Amazon challenge.

Not surprisingly, given the Beast from the East, B&Q owner Kingfisher had a rough first quarter with same-store sales falling by a nasty 4 per cent.

Nevertheless, its embrace of online through Screwfix is shining through, with a 9 per cent lift in overall sales in the UK.

Ten new outlets were opened, and revenues climbed to £395million, which is almost half those at B&Q outlets.

Tesco has turned around the tanker. There is no reason to think that, with a bit of invention, M&S, Kingfisher and others can’t do the same.