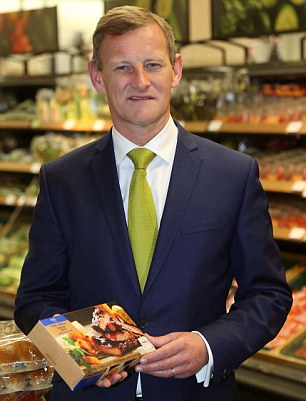 We shouldn’t be surprised that, in choosing a new boss for food, the group opted for Stuart Machin, a veteran of the Asda school of M&S chairman Archie Norman.

Machin has had his bumps. He hurriedly left Wesfarmers in Australia after a Tesco-style inflated profits problem, joining Steinhoff in the UK at the very moment the group’s South African/German parent became engulfed in an accounting swindle.

No one should be over-excited about the Asda pedigree of incomer given the record of another former insider Andy Hornby, who all but broke the bank at HBOS and was tipped unceremoniously out of Boots.

The most fascinating aspect of the M&S switch is the tone of chief executive Steve Rowe. His assertion that the food business has lots to do and needs ‘to change fast’ is unusually blunt.

So is the unvarnished departure of Andy Adcock, the director of food who leaves within six weeks.

M&S connoisseurs will find all of this bizarre given the increased emphasis on food made by Rowe when he first took over with promises of Simply Food openings and giving over some clothing space to food.

Since then same-store food sales have disappointed, expansion scaled back and store closures speeded up.

The lacuna for M&S in food is the lack of fresh produce delivery capacity when challengers are going great guns.

It is impossible to navigate middle-class suburbs without being stuck behind the Ocado or Tesco vans annoyingly causing obstruction.

M&S experimented in four centres with fresh food delivery and discovered the shopping basket is bigger than it thought, making an online offering possible.

Certainly, Amazon logistics bolstered by Whole Foods suppliers are enough to frighten anyone into submission.

It is not clear that is what Machin is being asked to do. M&S has been able to charge premium prices for better products but that bit of edge is being eaten away by Waitrose but as seriously by Lidl, the cheap retailer which sells faux premium goods and is able to hide its profitability (or lack of it) behind secretive German private ownership.

The challenge in retail is keeping up with savvy consumers who have become extraordinarily mercurial.

Bringing in outside talent may be just what is needed to support Rowe as keeper of the flame of Britain’s favourite store chain. But with every lurch one fears the mantle slips a little further.

With a market value of £4.3billion Marks is worth less than online clothing maker Asos, food groups Sainsbury’s and Morrisons, and little more than under-achiever Ocado.

Life might have been a little easier for Emma Walmsley if Reckitt Benckiser had remained in the auction for Pfizer consumer healthcare which include Advil painkillers, Centrum vitamins and Robitussin cough mixtures.

She could have then walked away claiming the price was too high.

Now the £14.3billion package must look very tempting for a GlaxoSmithKline chief who climbed to the top with consumer brands.

As a one-off deal Walmsley could probably make the case, arguing that the discarded Pfizer brands will enhance earnings from day one.

It is not quite as easy as that. Glaxo is lumbered with the legacy of predecessor Sir Andrew Witty’s asset swaps with Novartis.

If the Swiss firm were to exercise its option to sell Glaxo its 36.5 per cent in a joint consumer healthcare enterprise then Walmsley would have to spend another £8.6billion.

That would send borrowing sky high and raise questions as to whether Glaxo could invest sufficiently in a narrower range of new medicines to keep its place among world leaders in pharma and vaccinations.

It might even make the case for Neil Woodford’s proposed splits.

Pass me the Corsodyl mouthwash.

A big fuss at Crest Nicholson’s annual meeting, where 28 per cent of shareholders objected to chief executive Stephen Stone moving up to be executive chair for a year, in breach of governance codes.

Curious how investors are so tolerant of governance anarchy at GKN predators Melrose where Chris Miller is executive chairman, David Roper executive vice-chairman, and remuneration is off the scale.