ALEX BRUMMER: Royal Mail and its  Zurich-based boss Rico Back gets a bloody nose from investors 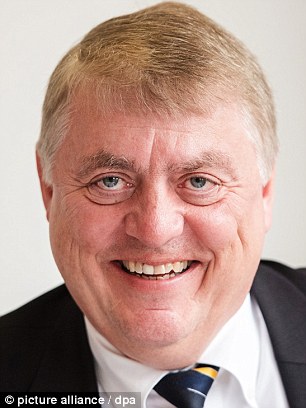 Royal Mail investors have delivered the bloodiest of noses to new Zurich-based chief executive Rico Back and the group’s board.

The company may claim the 70 per cent vote against the executive pay report is ‘non-binding’.

The reality is that this is the heaviest defeat for any FTSE 100 company since the 80.1 per cent vote against pay at the Royal Bank of Scotland at the height of the financial crisis in 2009.

It is not credible for chairman Peter Long and chairman of the pay committee Orna Ni-Chionna to argue that this a technical setback relating to the compounding of Back’s pension allowance into bonuses.

The defeat has deeper roots. It reflects on Back’s lifestyle choice of commuting to London from overseas and the extraordinary £6million paid by Royal Mail to extricate him from parcels offshoot GLS.

No one disputes that Back did a great job with the European operation, which contributes up to one-third of Royal Mail’s profits.

But it was extraordinarily careless of the board to gift someone who has been regularly attending executive meetings in London to a golden hello paid out of shareholder funds.

The idea that there was no choice because he had a contract is preposterous. If Back wanted the top job he should have abrogated the contract.

The reality is that, however brilliant Back’s logistical skills may be, he is now spoilt goods.

Every time citizens buy stamps the first thought will be why are they paying such an exorbitant price to support greed in the boardroom.

The very idea that Back could be an effective negotiator with the unions when he is so far removed in terms of geography, pay and culture is farcical.

Waiting until the autumn to sort out this mess is not an option.

Long and Ni-Chionna should claw back the excess and prevail on Back to relocate to the UK, where 60pc of the Royal Mail’s profits are made. If not, they should follow the example of the disgraced Persimmon chairman and pay chief and resign.

Somebody had to blink in the race to win control of 21st Century Fox assets, and it is Brian Roberts of Comcast.

The big question now for Roberts and Comcast is whether the company has the staying power and resource to keep up its pursuit of Sky – the crown jewel of the Murdoch empire.

At present, Comcast has the highest bid on the table with a £26billion offer. But there is a big obstacle in the way in the shape of 21st Century’s Fox 39 per cent stake.

Offered the right higher price, the Murdoch dynasty might concede Sky to Comcast, but there is no love lost between the protagonists.

London investors will be hoping that there will be another leg to the bidding war before Fox’s offer for the minority is withdrawn.

It will become a big holder in Disney and there might be some role for James Murdoch in the integration and beyond. The key for Disney now will be to get the deal done speedily.

It needs to hit the ground running with its ‘over the top’ streaming plans as Netflix and Amazon expand exponentially.

Disney is unlikely to want to remain an investor in Sky with Comcast holding all the aces, so one assumes it or 21st Century Fox will sell out.

As for Sky, it has been a brilliant ride for the Murdoch dynasty and one of the few great digital companies created in Britain.

Comcast’s pledges to invest in production in the UK and maintain independence at Sky News will provide comfort.

Unilever boss Paul Polman is right in seeking to end the split governance of the group and unify it under one flag.

The company will need all the bargaining power it can muster as it seeks to take on suppliers in the West coming together to demand lower prices.

But if Unilever plans more acquisitions, so as to build out its direct-to-consumer enterprises, it needs a full London share quote, with access to deep markets.

It would be pity if Polman’s illustrious career were to end with a battering from investors over the proposed headquarters shift to Rotterdam.