Standard advice to bosses hauled before Westminster or Congressional committees is to act all-so-humble, take the blame, apologise profusely and vow to do better.

TSB chief Paul Pester tried this pattern before the Treasury Select Committee (TSC) claiming 97 per cent of customer online accounts had been fixed.

Pester may be good at pumping out meaningless numbers but stumbled when confronted by real-life pain. Among the victims are TSC staff locked out from their accounts ten days after the systems meltdown at the Spanish-owned challenger bank.

Pester chose to take the punishment rather than shift responsibility to Banco Sabadell bosses discovered swigging champagne at a tennis tournament while TSB customers were being put through banking hell. 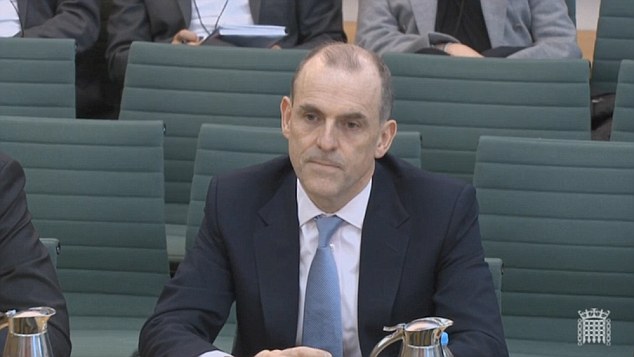 Apologies: Appearing before the Treasury Select Committee, Paul Pester chose to take the punishment rather than shift responsibility to Banco Sabadell bosses

We all know how disconcerting it is to lose a credit card. Imagine the anxiety in an increasingly cashless world if you are wholly cut off from your bank account.

Moreover, TSB’s well-meaning pledge to waive overdraft and other charges does not seem to have been properly implemented.

The debacle exposes the huge downsides of overseas ownership of financial institutions.

Systems failures can happen at any time as in 2014 when Heath-Robinson IT left behind by Fred Goodwin at RBS melted down. But at least at RBS there were senior managers to take the punishment.

Indeed, lessons were learned. In recent weeks both Barclays and RBS have been through the complexity of creating ‘ring-fenced’ retail banks without any known interruptions to service.

At TSB some blame must rest with Sabadell, which provided the prototype systems adopted by the bank. It was anxious, as the main shareholder, to end an arrangement under which TSB paid Lloyds Bank up to £200million for digital services.

The Financial Conduct Authority has all the powers it needs to punish Pester, TSB executives and the bank for harm done. But the regulator has no authority to force the owners to accept responsibility.

Truth is, the Spaniards were able to buy a UK retail banking income stream and an escape route from the turmoil of Catalan politics without the direct accountability.

The bitter Melrose takeover of GKN changes the rules of engagement for the Mayfair-based industrial group with investors, the workforce and other stakeholders.

With the absorption of engineer GKN it has been thrust into the mainstream. Freedom to dispose of aerospace assets, stipulations on national security assets and undertakings made to pensioners will be monitored.

Governance will also come into focus. The decision of investor advisory group Glass Lewis to recommend a vote against the company’s pay report at the May 10 annual meeting is a case in point.

It says pay at Melrose ‘far outpaced’ other European companies of a similar market size, with the big four set to receive £42million apiece for 2017 as a result of incentives put in place five years earlier.

If Melrose executives meet their not-terribly-challenging targets of bolstering the share price there could be a further pay gusher of £285million.

The original idea of such plans was to better align the interests of the bosses and company shareholders.

They were not meant as a licence to join the yachting and ski chalet set.

Investors who dashed to support Paul Polman 14 months ago, when Unilever came under siege from Kraft Heinz, have a more jaundiced view of him now.

There was a torrent of objections from private investors at the group’s annual meeting over the plan to shift the company’s main share quote to the Netherlands.

Just to cap it all, there was a hefty 35.8 per cent rebellion against a pay plan after Polman passed Go and picked up £11.6million last year.

Go back to start, do not pass Go…