The contrast between the fate of High Street names Next and House of Fraser could not be more stark. Next defies much of the pessimism, keeping faith with bricks and mortar as it grows its online offering.

Its strength lies in the consistency and prudence of the leadership of chief executive (Lord) Simon Wolfson and an early embrace of online and logistics assisted by the group’s catalogue.

House of Fraser could not be more different. Ownership has been passed around among overseas owners, private equity and mysterious Chinese investors like a valuable vase at an antiques fair. 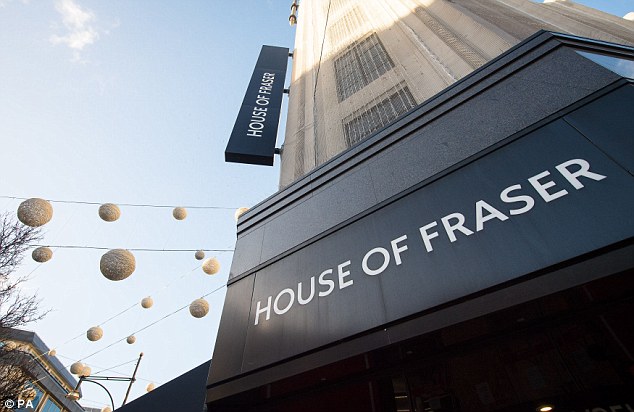 On the brink: House of Fraser has been passed around among overseas owners, private equity and mysterious Chinese investors like a valuable vase at an antiques fair

Its shops are filled with valuable stock but they are far too big, in the wrong places, under-invested and lack the digital capacity and know-how to take on Next, Amazon and upstart fashion brands such as Asos.

Maintaining sales is difficult enough for Next, which saw store sales fall by 5.9 per cent in the second quarter after 4.8 per cent decline in the first three months.

Online climbed by 12.5 per cent over the last three months helped by the heatwave.

The point about Next is that the shops portfolio and online are opposite sides of same coin.

The shops act as a showroom for Next clothing and household goods, and the excellent logistics mean that consumers can pick up goods ordered overnight from stores the following day.

There is a touch of Amazon about this as the US giant uses newly acquired outlets such as Whole Foods to enhance its online experience.

House of Fraser’s future hangs by a gossamer thread. In the period that landlords have been fighting the Company Voluntary Arrangement in the courts, shares of the would-be rescuer C Banner have fallen into the China sea. So it is no longer able to raise the finance.

The property owners have been too greedy by half. They stand to end up with 59 empty stores, instead of half that number, receiving no rents at all.

It is not clear where House of Fraser goes from here except to find another cornerstone investor with Sports Direct’s Mike Ashley the most likely contender with an 11 per cent equity stake. Ashley has never been scared off by challenge and moves in mysterious ways.

But even with his ambitions to make Sports Direct the Selfridges of active retailing it is not clear that even he could manage this particular trick.

As Beijing clamps down on capital flight for frivolous investment the days of the Chinese bearing gifts is over.

Lloyds Bank has started to throw up the cash of a well-oiled-machine just as was envisaged when Sir Victor Blank and Eric Daniels bought HBOS ten years ago.

In the six months to the end of June before-tax profits hit £3.2billion, leaving room for a dividend increase.

The journey has been a harsh one with tens of thousands of jobs lost, branches closed the length of the land and £19.2billion spent on compensation for payment protection insurance.

But the hosannas should not be that loud given the bank’s domination of Britain’s mortgage, current account, savings and more recently credit card markets.

If there is a barrier to challenger banks making real progress in the UK it is the fact that Lloyds was allowed to grow big without a competition inquiry.

Horta-Osorio’s problems are not entirely over. The bank still has the stain of an alleged cover up of fraud at its Reading branch to deal with.

It may draw some comfort from the Financial Conduct Authority’s lame probe of wrongdoing at Royal Bank of Scotland’s restructuring unit GRG to draw upon.

Former managers were given a clean bill of health because it was too difficult to do anything else.

Could another legalistic whitewash be on the way?

On the agenda are costs, technology and the conflict between being a marketplace and regulator.

Lloyd’s claims this does not amount to a strategic review. Of course not.