All of Poundworld’s 355 stores to close within a month 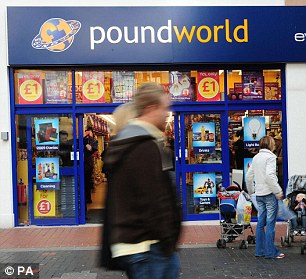 Thousands of jobs face the axe at budget retailer Poundworld as all of its 355 stores are set to shut by August 10.

The firm, based near Wakefield, had around 5,100 employees when it fell into administration in June after its majority owner, private equity group TPG Capital, failed to find a buyer.

Store closures had been announced since then but it had been hoped the others could be saved.

However, last night administrator Deloitte revealed all of them will be closed.

The distribution and head offices will shut on Friday with the loss of 299 jobs. Deloitte said talks would continue with interested parties for the potential sale of parts of the remaining business.

Joint administrator Clare Boardman said: ‘We would like to thank all the employees for their continued support and commitment during this difficult time.’