More than £13 billion was wiped off the value of top American drug sellers after Amazon revealed it had bought an online pharmacy.

The tech giant’s £750m purchase of Pillpack sent investors in CVS Health, Walmart and Walgreens, the owner of UK chain Boots, running for the hills.

It was the latest example of the fear the internet retailer can inspire when it enters a new industry. Last year, billions of pounds were wiped off the value of Britain’s Big Four supermarkets when Amazon revealed it had bought retailer Whole Foods. 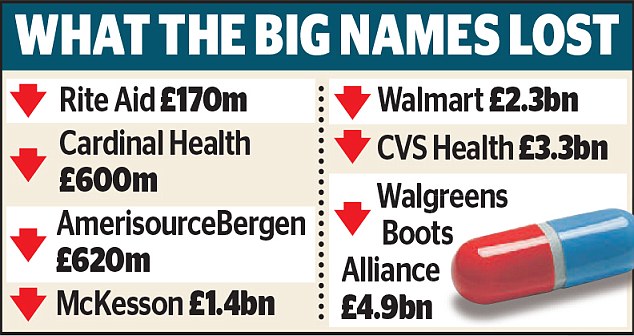 The swoop came after months of speculation by analysts that Amazon was poised to enter healthcare. Stefano Pessina, the boss of Walgreens Boots Alliance, admitted: ‘Yes, it is a declaration of intent from Amazon.’

But despite nearly £5 billion being wiped off his company’s value, he claimed there was no reason to be worried. He said: ‘We know exactly what our strategy is. You will never see us panicking or acting under the pressure of the emotion.’

Amazon’s takeover of Pillpack gives it an entry point into deliveries of prescription drugs. The company, though small, is licensed to operate in 49 states.

Jeff Wilke, Amazon’s worldwide consumer boss, said: ‘Pillpack’s visionary team has a combination of deep pharmacy experience and a focus on technology. It is meaningfully improving its customers’ lives.’

After the announcement, £2.3 billion was wiped off the value off groceries giant Walmart, £3.5 billion off drugstore rivals CVS Health and Rite Aid and £2.6 billion off distributors McKesson, Cardinal Health and AmerisourceBergen.