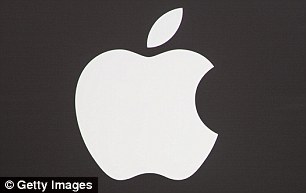 $1tn target: Apple was up 1.4% after markets opened yesterday

The US tech giant was up 1.4 per cent after markets opened yesterday, breaching the $190 (£140) mark for the first time.

The rally comes after Wall Street titan Warren Buffett gave it a ringing endorsement. It also stunned Wall Street with results that were better than expected, even as iPhone sales slowed.