Are Monzo, Revolut, Starling and Transferwise safe to bank with?

If you haven’t heard of the bright new fintechs, there is a strong possibility that you have seen them.

They are most visibly recognised by bright ‘millennial’ coloured payment cards.

For Monzo, coral pink is the order of the day. TransferWise recently plumped for tennis ball green. And let’s not forget Starling, which now comes in a rather eye-catching ice pop blue, busting all the rules with its portrait design.

It might all seem like fun and games, but when it comes to money, customers need to know where they stand, whether their cash is protected, and how quickly their problems will be answered. The old rules still apply. 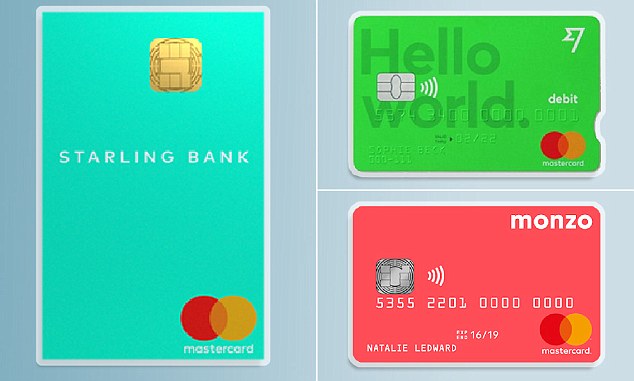 Bright: Many fintechs grab people’s attention with their bright and colourful cards

The way that some fintechs present themselves has left consumers baffled by what they are dealing with, how these companies are regulated and who to go to when things go wrong.

Last week, we revealed the shortfalls in customer services at Revolut, a currency card provider which has locked seemingly innocent customers out of their funds while they were travelling the world.

Customers have found it is taking a long time to fix problems via its service agents as there’s no telephone number. They can only be contacted via chat online.

The Financial Ombudsman Service confirmed to This is Money that it has received dozens of complaints about Revolut since April and social media websites continue to be flooded with frustrated customers.

These numbers are still a long way behind the banks, but they highlight that things can go wrong at these shiny new financial firms.

Experts maintain it is essential that the hundreds of thousands of consumers who use these companies are informed about their nature to allow them to make reasoned decisions about who to trust with their money.

Pawel Kuskowski, former global head of anti-money laundering at RBS, now chief executive of Coinbase outlined the problem to This is Money: ‘These providers start looking very alike, services are very similar as well, even when operating under different licences.

‘Perhaps there is some more information that needs to be provided to the market as the risks are very different.’

Consider Monzo and Starling. They are both licensed banks and are covered by the Financial Services Compensation Scheme in the same way that the big high street banks are.

The FSCS currently protects retail deposits up to £85,000 in the event of the failure of a bank, building society or credit union that is part of the scheme.

Not all challenger companies are covered however, and it isn’t always clear from their websites and advertising material.

For example, despite the messaging on Revolut’s website of being ‘better than your bank account,’ Revolut is not a bank, nor is any money you hold with it covered by the FSCS.

Mr Kuskowski highlights the difference in his personal usage: ‘I would use Revolut as a service, but I would never leave larger amounts of money on their systems, this is not a bank account. I would also recommend topping up using a credit card.’ 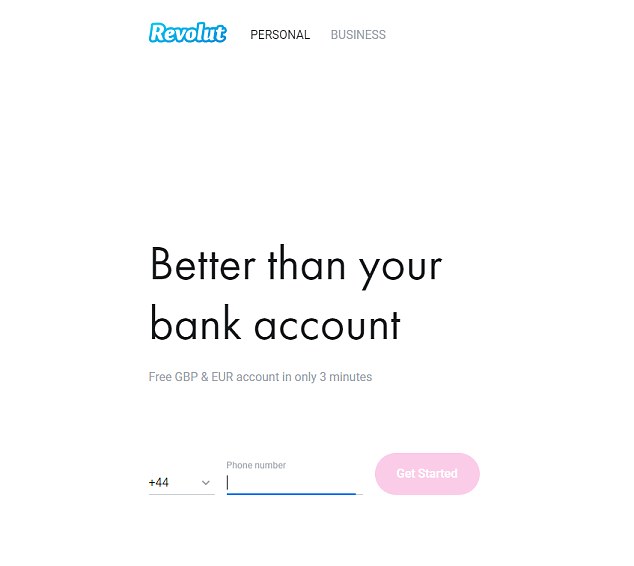 Revolut is not a bank, but it claims it is better than your bank account on its homepage

The Advertising Standards Authority has also received complaints from customers  – about the way currency transfer services present themselves.

The ASA received 11 complaints about Revolut in the past year, with one resulting in an informal ruling and a change of wording on the company’s website.

Specifically the claims on Revolut’s website that customers could ‘buy and exchange cryptocurrencies instantly’ and ‘buy cryptocurrency with no hidden fees. No deposit fees. No subscription fees. No exit fees’ were challenged by customers as misleading, as the only way to trade was with a premium account or by referring friends.

During the same period, TransferWise had three complaints, though none resulted in an investigation.

Challenger banks Starling and Monzo had no complaints registered with ASA.

‘I trust Starling with my salary. I just don’t trust Revolut in the same way’ 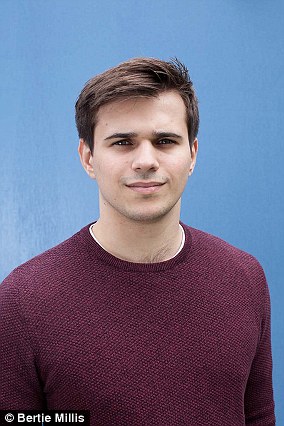 Bertie Millis, a small business owner who has tried a number of these new wave financial firms, told This is Money how he made use of Revolut for the global insurance policy that the firm offered but that recent interactions with the company had left him less than impressed.

‘I trust Starling with my salary, I don’t trust Revolut the same way,’ he told This is Money.

‘Starling’s communication has always felt transparent and I always feel like I comprehend what I’m signing up for.

‘I didn’t have that with Revolut, I signed up for their premium service on the 30-day free trial and then without realising, I had agreed to a 12-month paid contract when I expected it to be a rolling contract like every other ‘pay monthly’ agreement from service companies,’ he explained.

‘I went to leave Revolut and they tried to charge me a £14 fee to downgrade my premium account.’

One of the broader strategic aims of almost all fintechs is that they want you to trust them with your salary.

Waived fee: Bertie had the fee waived but it highlights how you have to interact with the firm and messages can be left in limbo

Companies like Monzo don’t want you siphoning off a few hundred pounds a month into their account after you have had your salary paid into your HSBC account. They want to receive it all.

To convince people to part with their cash, fintechs have to make it clear that your money is safe with them and that they will be there when things go wrong.

Trust is essential, because many fintechs want to be the centre of your financial universe. Once this happens it becomes a lot easier for them to make money.

Whether this happens is a question that will have a huge impact on whether these firms survive because right now, many of them are hemorrhaging cash.

Monzo saw losses of £33.1million in the 12 months to February 2018, though for fast-growth technology companies that story isn’t anything new.

Companies like taxi firm Uber can remain loss making for many years, as they hoover up hundreds of millions of dollars of venture capital to fund lofty, and expensive, global expansion plans.

While most people wouldn’t fuss too much about the balance sheet of a transport app, when it comes to money, the stakes are much higher.

After all, it’s one thing if your laundry has gone missing via a new tech start-up, it is another thing if you are stranded overseas without any access to cash.

For customers looking at trying out the new fintechs, the old rules still apply.

Do your research. Check out what customers are saying on social media. Ask difficult questions and proceed with caution.

Below, we take a look at each offering and whether Meriwether Beckwith, an investor at Oxford Capital Partners, believes them to be a fintech unicorn.

This is a privately held start-up company that could potentially be valued at more than $1billion.

How old? Monzo was founded in 2015 and has offered current accounts since late 2017.

What makes it a potential unicorn?

‘Monzo is truly a full service business to consumer bank, but one that provides a much better customer experience than the traditional high street banks, especially online and via its app.

‘This has enabled it to grow quickly by word of mouth without the need to advertise,’ says Meriwether.

Complaints received by the FOS since April?  Fewer than 30

Complaints received by the advertising standards authority in past 12 months? 0

Is it FSCS protected? Yes

What it offers? Money transfers into 24 currencies, cryptocurrency exchange

What makes it a potential unicorn? ‘Revolut offers an impressive range of innovative products, from very low cost currency exchange to cryptocurrencies and insurance.

‘They have grown user numbers spectacularly with very little investment in marketing, and the currency exchange product has meant it addresses a larger global market of potential users,’ says Meriwether.

Complaints received by the financial ombudsman since April?  Around 80

Complaints received by the advertising standards authority in past 12 months? 11, of which one resulted in an informal ruling

Is it FSCS protected? No

What makes it a potential unicorn? ‘Unlike its competitors, Starling has built its technology from scratch and does not rely on outdated technology infrastructure.

‘This allows it to offer a superior experience to customers while maintaining higher profit margins, and also to offer innovative products to business banking customers,’ says Meriwether.

Complaints received by the financial ombudsman since April?  Fewer than 30

Complaints received by advertising standards in the past 12 months?  0

Is it FSCS protected? Yes

Customer numbers? 3million, declined to comment how many in the UK

What it offers: Money transfer to 40+ currencies and over 70 countries

Complaints received by the financial ombudsman in the past six months? Fewer than 30

Complaints received by advertising standards in the past 12 months? Three, of which none resulted in an investigation or ruling

Is it FSCS protected? No

What other fintechs are vying for your business?

There are a number of fintech firms looking to ‘disrupt’ the way you handle your finances.

Below, we pick some to look out for and which have possible unicorn potential.

Credit Kudos scans your financial behaviour using open banking, to assess whether you are in a position to receive credit.

For many, such an analysis will be much more appealing than answering questions about whether they are on the electoral register and how long they have lived at their current address.

FatLama -‘Borrow almost anything’ is the tagline and they don’t disappoint: pots, pans, hoovers and chocolate fountains are all available.

As it is a marketplace, you can also earn by renting out excess belongings.

That leaf blower that has sat in the shed for months might be able to make you some money.

Flock – It’s by-the-flight insurance for your drone. Even better than getting coverage for your Christmas present, it is possible to play with the app to work out where flights are more expensive to insure, encouraging you to explore lower risk areas.

Oval money – As more and more people work unpredictable shifts and as part of the gig economy, both budgeting and saving have become more difficult.

Oval money uses little psychological nudges to encourage positive saving behaviour. Once you have a little pot, they help you invest that money, too.

Seedrs – Investing in high risk, high reward start-ups can be difficult as a small investor.

Even better, their secondary market makes it possible to sell on your stake, making equity crowdfunding much more liquid.

Trussle – Meeting with a mortgage adviser is an alien experience for most first-time buyers and one that can induce its fair share of anxiety.

Trussle aims to take some of that stress away, through an online portal. The company aims to amend the mortgage offer you have, if a better one comes along.