As the price of petrol soars, is oil a slick investment?

The price of oil is soaring and experts say it could be the right time for investors to take another look at the black stuff.

The threat of US sanctions against oil-rich Iran and a collapse in production in Venezuela – which has the world’s largest reserves – has pushed Brent crude up to a four-year high of $77 a barrel.

It marks a remarkable turnaround, shooting up from just below $30 a barrel two years ago.

Global supply is expected to fall if the US presses ahead with trade sanctions on Iran, which experts say will push up the price even further. 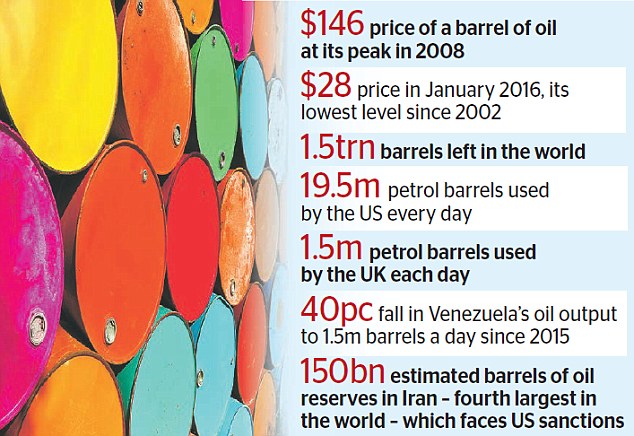 Ashley Kelty, an oil and gas research analyst at Cantor Fitzgerald, said: ‘I think we could get to $80 a barrel within days.

In the medium-term we could see $90 a barrel.’ And Bank of America bullishly predicts it will reach $100 next year for the first time since 2014.

Rising prices makes oil, unloved by investors for so long, a more attractive proposition. So how can you take advantage?

Before answering, you need to be sure that you want your money in oil, as the past few years have shown it can be a rollercoaster for investors.

And while all of the signs indicate the price will continue to rise, it is by no means certain.

Tom Becket, chief investment officer at Psigma, said: ‘You have to believe supply is going to become increasingly tight if you want to take a positive view on oil at the moment.’

If that is the case, there are a number of options on offer, but one of the easiest is to buy shares in oil firms such as BP and Shell.

While the oil price has rocketed by more than 58 per cent in the past year, the share prices of BP and Shell have failed to keep pace. BP’s have risen 22 per cent in that time, while Shell’s are up just 18.5 per cent.

That aside, they are a decent bet for investors seeking a good income as part of a diversified portfolio.

But buying individual shares can be risky, so many investors prefer to reduce that danger by putting their money in a fund that invests in a number of firms.

Its two biggest holdings are BP and Shell, which account for more than £10.60 in every £100 invested.

Alternatively you could punt for a so-called passive fund. These are controlled by a computer rather than a fund manager.

One of the benefits is that they tend to be cheaper than an active fund, where you pay for the upkeep of large research teams and expensive fund manager salaries.

A drawback is that you will never beat the market. They are designed to blindly follow the index up and down.

It is designed to replicate the FTSE 100 where BP and Shell are in the top-five firms.

If you’re after a specialist fund, Mould recommends Guinness Global Energy, which invests in the oil, natural gas, coal and alternative energy sectors.

Finally, you could invest in a fund that tracks the oil price. The ETFS Commodity Securities Brent Crude Fund, for example, tracks the European oil benchmark.