ASK TONY: British Gas chased me for thousands of pounds I didn’t owe

We have lived in a housing association property with electric services since 1994. For much of this time I have received bills from British Gas addressed to ‘The Occupier’ and lately to ‘South Northamptonshire Council’.

At one stage, these bills were around £4,000 to £5,000 and were followed by letters accusing us of not paying. We became aware of a problem after six or seven years when we tried to buy the property and were told there had been a charge placed on it.

I have been told by both British Gas and the council not to worry because I am not responsible for the bills.

In December 2016, I asked to be connected to the gas supply and since then I’ve been receiving bills of about £50 per quarter for the gas I use. But it has added a disputed amount, pushing the bill to approximately £1,200. 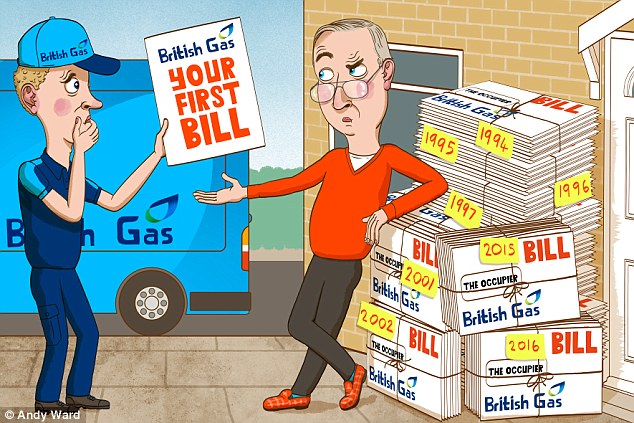 As you might expect from an issue that has gone on for years, your case is quite complex. The crux is that British Gas fitted a gas supply and meter to your home in October 2002, then treated it as a business account.

When it did not hear from you or the local council, it began billing a 55p daily standing charge from October 14, 2011.

It says you didn’t respond to letters — but if they were addressed to the council, you should not have opened them and you may have thrown away letters to ‘The Occupier’, assuming they were junk.

British Gas visited the property on July 18, 2016 and confirmed no gas was being used. However, this changed when you were connected to the supply and sent a meter reading on March 8, 2017.

For some reason, you were still being treated as a business customer. British Gas withdrew the £1,112.66 standing charges on October 21 last year, it says as a goodwill gesture — but I cannot see where there is any goodwill if you weren’t a customer!

It also offered to price-match its standard residential tariff —which it says has at times been its cheapest tariff. You told British Gas you would shop around and this is where things become more confusing.

You say a new supplier will not take you because of the ‘dispute’ with British Gas — but British Gas says there is no dispute. It says you have not made any payments for gas, but why should you if you were being billed in the wrong name and as a business?

A bill at residential rates has now been issued, so I think the resolution is to pay what you owe and move to another supplier.

I set up a direct debit to cover my Virgin credit card payments each month. At the start of July, I checked my online statement and noticed a £9 late payment fee and £116 in interest charges had been added to my balance because my direct debit had been cancelled. I didn’t do this but both my bank and Virgin Money claim they didn’t either. Meanwhile, the fees continue to accrue more interest. T. T., by email.

When I contacted Virgin Money, it denied liability. But after closer inspection it admitted it had cancelled your direct debit in error. It has contacted you to apologise and agreed to refund the late payment fee and interest charges and pay you £300 in compensation for the inconvenience caused. It will also reinstate the 0 pc interest offer removed following the missed payment.

Recently I found a three-year-old email from the National Lottery saying I had won a prize. I play online and the money automatically leaves my account — but at 90, I don’t check my emails often. Are prizes paid into my account automatically, or do I need to claim it? G. B., Telford.

A spokesman for Camelot, which runs the National Lottery, says that prizes of up to £500 are paid into a player’s online account automatically. For anything over that, you need to confirm where you want the prize money to be paid. The spokesman adds that if they do not hear from the winner after 60 days, they will try to contact them using the details they have on file. The onus is on the player to make sure these are up to date.

When I taxed my vehicle via the DVLA website, I was charged for paying by credit card. I thought this practice was now banned. H. T., by email.

A spokesman for DVLA says that it has not charged motorists to pay with a regular credit card since January 2018, when — as you point out — credit and debit card surcharges were banned.

However, if you use a commercial or business credit card, you will be charged a £2.50 processing fee — which is in line with the new legislation. There is no charge for debit cards.

Is there any reason why I get only four weeks’ state pension each month and then receive the balance with an extra month’s payment later in the year? Since my bills demand equal payments throughout the year, this makes budgeting difficult.

Presumably everyone who is paid monthly is treated the same way, which must mean the Government saves millions for the first part of the year.

I understand your frustration but it is not quite as you paint it.

The state pension is based on weekly, not monthly, payment. You are paid every four weeks in arrears, not every month. Therefore, the payment will edge a little further forward each month — until in one month you will receive two payments, one at the start and one at the end.

Malcolm McLean, of actuary Barnett Waddingham, explains: ‘You can normally expect to receive 13 payments spread evenly over the course of a year.’

Mr McLean says that pensioners who were receiving their state pension prior to April 6, 2010 still have the right to be paid weekly in advance. From then on, payments changed to four-weekly in arrears for all new claimants.

‘The Department for Work and Pensions stressed that moving to paying in arrears was not primarily a money-saving measure, while acknowledging that the system would save £10million a year by 2020,’ he adds.

Apparently it argued that ‘paying in arrears will reduce the amount of money the department overpays and has difficulty recovering when a customer dies’.

How thoughtful! Perhaps more thought should have been given to what was convenient for living ‘customers’. I’m afraid the best thing I can suggest is that you look on the 13th payment as a bonus.

I’ve got investments in an Isa with Cofunds — this provides me with regular payments on which I heavily rely.

Earlier this year, I was told that Cofunds had been taken over by Aegon — then, in June, the payments stopped. I believe I’m owed more than £900.

You’re not the only one to have faced problems after Cofunds customers were transferred on May 8. According to our sister title This Is Money, around 400 customers faced issues logging on, buying and selling funds, and withdrawing money.

When I spoke to Aegon, I was told the problems had been resolved. But your case shows there may still be issues. An Aegon spokesman says: ‘We sincerely apologise for the delay, and can confirm that payment will reach his account before the weekend.’

Write to Tony Hazell at Ask Tony, Money Mail, Northcliffe House, 2 Derry Street, London W8 5TT or email asktony@dailymail.co.uk — please include your daytime phone number, postal address and a separate note addressed to the offending organisation giving them permission to talk to Tony Hazell. We regret we cannot reply to individual letters. Please do not send original documents as we cannot take responsibility for them. No legal responsibility can be accepted by the Daily Mail for answers given.