ASK TONY: EE billed woman for phone she never knew she had

I work full-time as a carer for a young lady with profound emotional and learning disabilities. She lives with me and was previously homeless, as she couldn’t live with relatives.

Before she arrived here, her mother had been her appointee and had a history of abusing the benefits. She had taken her daughter to an EE shop to get an iPhone with a monthly charge of £50.

Her daughter has no idea how to use this phone, and ran up huge bills. EE would not allow us to cancel the contract as it had been signed-for some months previously. 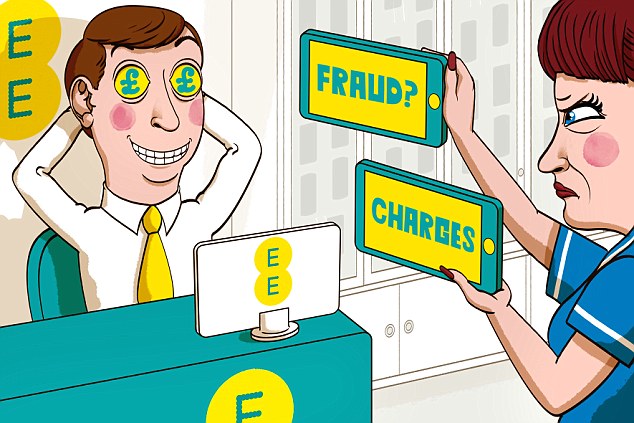 More recently, a £45-per-month SIM card was purchased online using her bank details but without her knowledge; she was in a respite facility at the time.

After consulting its legal team, EE refused to cancel the contract because the purchase had been placed more than two weeks previously.

The SIM card was for a family member and was, I believe, obtained fraudulently. I have reported this to social services but, as it happened within the family, they are reluctant to go to the police.

I was horrified when I read your letter. Firms have a responsibility to make reasonable adjustments to their policy under the Equality Act 2010.

EE may not have been aware of the disability issues initially, but it would have become clear when you visited the shop.

It took some weeks for it to disentangle the case once I made contact. It has now closed the SIM-only plan and cancelled all of the outstanding balance. It has also arranged for all payments so far to be refunded.

EE says that in this case, the family member had access to all of the personal details needed to set up the account.

It has been in touch to explain what happened and to help organise additional security, including sharing information from Action Fraud to prevent any recurrences.


However, I did not feel this went far enough. After further pushing, EE agreed to cancel the original iPhone contract and switch it to a pay-as-you-go account, to give both of you more control.

EE emphasises that it was not aware of any disability issues at the time the contracts were taken out.

It adds that it must treat all customers equally, so refusal of the contracts could have placed it in breach of obligations.

However, I feel this does not excuse its refusal to cancel the SIM-only contract once you had informed it of the fraud, especially as the legal team were involved in that decision. 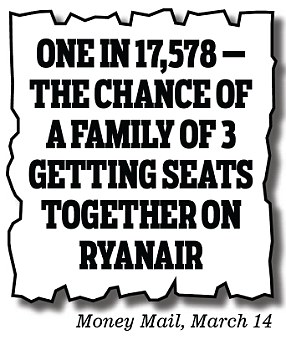 Here are some from our report on how two parents and a teenage child have almost no chance of sitting together on a Ryanair flight without paying extra:

I wonder who is responsible for child safeguarding if an airline does not seat parents and children together unless they pay?

If a child is not sitting with their parent and the airline has an emergency, who is responsible for ensuring the child’s oxygen mask is put on?

When we flew to Malaga in February, Ryanair allocated our seats randomly. On both journeys, my six-year-old grandson was given a seat on his own in the middle of a row.

It cost us £8 so his mother could sit next to him. It’s a complete fiasco and time the firm came clean.

I have flown hundreds of times with Ryanair. We always board when we want to and usually sit together in the first five rows.

We have never been late or had flights cancelled, and we pay on average £10 each for the privilege. I have no complaints.

Why is everyone so obsessed with sitting together? Most of these flights are only two or three hours long.

You read, watch TV on your phone or play games. So what difference does it make?

You will see them when you get off the plane. If you have children, you have to pay, or go with another airline.

This is why the flights are so cheap. If you want the extras, pay for them or go with another airline.

It’s £4 per seat. A lot of people will spend more than that on a pint in the airport bar.

I am a retired teacher and have been a self-employed tutor and cleaner since April 2012. I am 62 and do not qualify for a state pension until I am 66.

I receive three, small teachers’ pensions based on my own and my late husband’s work. All three are tax-exempt as tax was paid during the employment.

HMRC has incorrectly taxed all three pensions at source since 2012/13. My tax codes for those years are wrong, too.

However, it is refusing to correct the codes, or to send me a tax rebate. Also, it has not given me any allowances for my self-employed expenses.

From the information you sent me, your tax appears correct.

First, your teacher’s pensions are taxable. You now think the basis of your misunderstanding was a conversation with your late husband, who said you should never have to pay tax on them. This was because of your low income at the time.

Your coding notice refers to £5,226 of your teacher’s widow’s pension being tax-free. However, this is simply explaining how your personal allowance — the tax-free portion of your income, £11,500 this tax year — is used.

You also say that HMRC has not made any allowance for your self-employed expenses. But it is up to you to make reasonable deductions from your profits when you present your accounts.

You told me you had dispensed with your accountant; I suspect they did this for you in the past. You can send a simple profit-and-loss summary to HMRC rather than doing full accounts.

I sent your letter to HMRC so it could double-check that all is in order. It has been in touch with you and is suggesting you send your self-employed expenses for the past four years so your tax can be put in order. You should eventually receive a rebate.

I nominated my wife to receive payments from my annuity on my death. Sadly, she has since died. I have no intention to remarry, but could a new wife benefit?

It depends on the wording of your annuity contract. If your late wife was named in the documents, the payouts cannot be passed to anyone else.

But if the contract simply refers to an unnamed spouse, then a new partner can benefit.

ScottishPower keeps sending me estimated bills, even though it takes a meter reading every month.

The firm has investigated and says its meter reader took down the wrong numbers.

Your account has been updated and is £355.47 in credit — with a £100 goodwill payment added by way of apology.

A spokesman says: ‘We sincerely apologise for any upset this has caused and for the length of time it has taken to resolve.’

Virgin Money kept charging me after I switched telephone providers in September.

I’ve asked it to refund the £42 wrongly taken out of my bank account in October and November, but it has refused.

It has apologised and issued a refund as a goodwill gesture. It says the issue stemmed from a delay in switching your line that it claims was out of its control.

You say you are satisfied with the result.

In August 2017, I bought a funeral package through the Central England Co-operative, a partner of the Co-op, and accrued membership points totalling £199.80.

Since then, I’ve repeatedly tried to claim the points to spend in store, but Co-op won’t help.

Any rewards earned through Central England’s scheme are paid twice a year — and you will receive your money in May.

In recognition of the confusion, Co-op has offered to donate £199.08 to a charity of your choice.

My 90-year-old widowed sister is registered blind and is forgetful, so I look after her affairs.

I found two £20 Co-op Bank cheques in her house. Both were out of date.

I have made contact to ask whether the cheques are from the bank or from one of its customers, but it says it cannot tell me because of the Data Protection Act.

Co-op Bank has a problem here because it is indeed bound by the Data Protection Act.

It has been very helpful and has managed to trace where the cheques originated, but the difficulty is it cannot say who the customer is without their permission.

The organisation that wrote the cheques has not been helpful and refused to have its details passed on. Co-op Bank has now asked it to contact you directly.

I have done a bit of detective work and found the initials of the organisation are on the cheque.

Type these into Google along with your sister’s location, and one organisation pops up.

I hope it is more responsive and helpful when you make contact.