My father has vascular dementia and has been in a home since March. Two months before this he took out a mobile phone contract as well as broadband and landline with EE. The first payment was on January 31.

I told EE of his condition and that he was in a home. I was told that if I sent a doctor’s letter no cancellation fee would apply. The letter cost me £35. My father was then sent a bill for £215.56.

I phoned them but the password I had does not match the one they hold. After a heated discussion they said they had made a mistake and I should go to my bank for a direct debit indemnity. I did this and got a refund. My father has now had another bill for this amount. I am at my wit’s end. 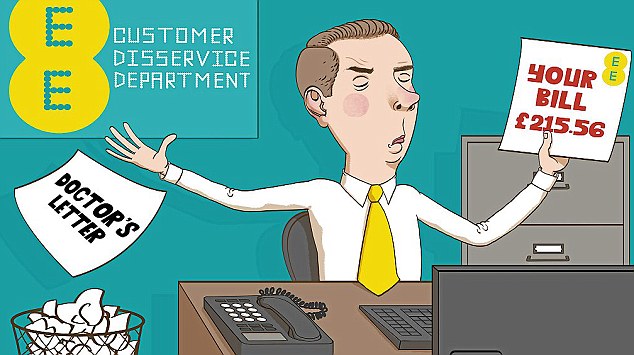 One reader says their father was being billed by EE for more than £200 a month, even though he has dementia

Money Mail has had considerable success tackling companies who treat bereaved people poorly. But equal understanding and compassion needs to be shown to those handling affairs of elderly parents.

In cases such as yours, where the parent has dementia, it can almost be worse than bereavement. Our parent is there but we must watch them fade away from us.

And when we try to tidy up their financial affairs we can face barriers from unsympathetic, obstructive and cold-hearted companies. I think it is justifiable to question how your father was sold these contracts in the first place.

If he was two months away from being admitted into care it would probably have been obvious to whoever sold the contracts that something was amiss.

When you made contact, EE should have done everything to smooth the path. As for the doctor’s letter — do they really think somebody would lie about such an issue to get out of a contract? If so, that tells us much about their approach to customers.

EE did finally do the right thing when I made contact. You have now received a call from its executive care team and an assurance that the contract will be cancelled without charge. 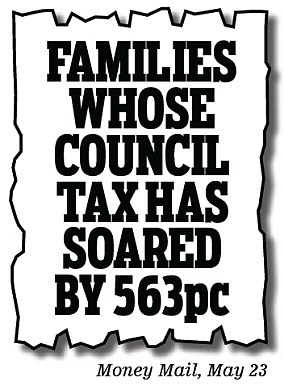 Every week, Money Mail receives hundreds of your letters and emails about our stories. Here are some of the best from our report on how council tax bills in some parts of Britain have risen nine times faster than the cost of living…

What ludicrous council tax increases. I live in Hillingdon, West London. We haven’t had an increase for more than ten years and we have great services.

With council tax you can’t shop around. I wonder what the bills would be if there was a competitive system. Maybe a lawyer can bring a class action against a council or the Government.

Our local authority roads are so bad that the council reduced road speeds to 20mph. This was clearly a desperate bid to reduce claims from pothole damage.

In Dorset, wages are low and housing is expensive. A local purchase tax on goods would be a better idea, and then struggling households would not have to suffer high taxation.

Council tax is a regressive tax and needs to go. The majority of the tax bill is being weighted on the poorest in terms of the percentage of their income.

When I rang I was told we didn’t even have an account.

Scottish Power has been shocking but to change supplier our gas meter has to be registered. This has not happened.

When I called they hadn’t a clue why I was ringing.

Scottish Power says your gas meter was installed on March 31 last year but admits there was an issue in registering it on the national database.

Apparently this was sorted as part of your ombudsman complaint and you were awarded £230, closing that issue. But there remains a £276.56 gas bill. This relates to the period before your gas and electricity account were combined. The bill covers the period from April 11 to November 26. Although you would have used no gas in the first two months you would have used it from June.

No payments were made towards the gas account during this period. You accept this. Scottish Power has apologised and reduced your bill to £150 as a goodwill gesture. You have accepted this offer.

I had a mortgage many years ago with Alliance & Leicester. I know there was payment protection attached to it but I sold the property and repaid the mortgage in 1999.

I contacted Santander and they said they could do nothing without the account number. After all these years I have only got the address of the property. They continue to fob me off.

I think it’s a trifle unfair to accuse Santander of fobbing you off when you have only now gotten around to complaining despite the PPI scandal being covered in the Press since the early 2000s.

Alliance & Leicester itself was fined £7 million for its part in the controversy in October 2008 — a story which received prominent coverage in the Daily Mail and other papers. Santander took over Alliance & Leicester in July 2008. I doubted they would be able to help but asked them to take another look just in case.

They tell me that after an extensive search they are unable to locate the mortgage account or any PPI policy. They also received information from Aviva, which ran the PPI policies, confirming there is no trace of one for you.

In line with the Data Protection Act, Santander points out it is only required to store records for up to six years after an account is terminated or a financial relationship ceases.

If you don’t have details of your mortgage from 19 years ago perhaps you shouldn’t be surprised that Santander also doesn’t have any record of it.

While payment protection rightly has an appalling reputation I note yours was to cover a mortgage. MPPI was very different to PPI flogged with credit cards. Alliance & Leicester’s fine related to PPI sold with personal loans.

The government encouraged buying MPPI with the aim of protecting mortgage payments and keeping people in their homes if they lose their job or become unable to work. This was at a time when it was pulling back on state benefits for mortgage interest paid to those who lost their jobs. So even though you had MPPI it may not have been mis-sold.

Having said that, Santander stopped selling MPPI in January 2012.

I tried to take a dress back to a shop which didn’t fit. The shop said all they could offer me was a credit note but I want my money back. Is this correct?

If the dress was faulty you would have a legal right to a refund if you returned it within 30 days. However, if there is nothing wrong with it you must rely on the shop’s own returns policy. This might offer you cash for a return, although the shop is also entitled to offer you just a credit note.

I complained to the Financial Ombudsman but I’m unhappy with how they have dealt with my case. Can I now complain about them? And if so, who should I complain to?

If the Ombudsman finds against you, that decision is final. Your only option is to take your case to court. If it is not the outcome that is bothering you but rather the service provided you should first complain to the case handler and then their manager.

If you are still unhappy you can write to the Financial Ombudsman’s independent assessor, Amerdeep Somal, who will then carry out a review of the way it handled your complaint. Email her at independent.assessor@financial-ombudsman.org.uk or write to The Independent Assessor, PO Box 35738, London E14 9YU.

I bought breakdown cover from the AA because it offered a £20 M&S or Boots voucher. I paid £39 in February for the insurance but there’s no sign of the gift. I’ve called several times to no avail.

The AA says it sent you a letter on March 6 containing a link to an online page where you could register your email. This is so that you could be sent the vouchers digitally.

A spokesman says you missed a character when inputting your email address, which is why you never received them. It apologised that you didn’t get through on the phone first time or manage to speak to an appropriate person. The AA has now re-issued the voucher code to you.