ASK TONY: NatWest wants me to sort out debts racked up by my ex-husband

When I separated from my husband we had a NatWest account with a large overdraft. It was a joint account, but had only ever been used by him.

NatWest refused to separate our financial affairs unless I had a written undertaking from my ex-husband.

After 18 months I finally obtained one stating that he takes responsibility for the account and would sign paperwork to remove my name from it.

After eight weeks of referral between departments and discussions with their legal team, NatWest has said I cannot be removed until the overdraft balance is cleared. 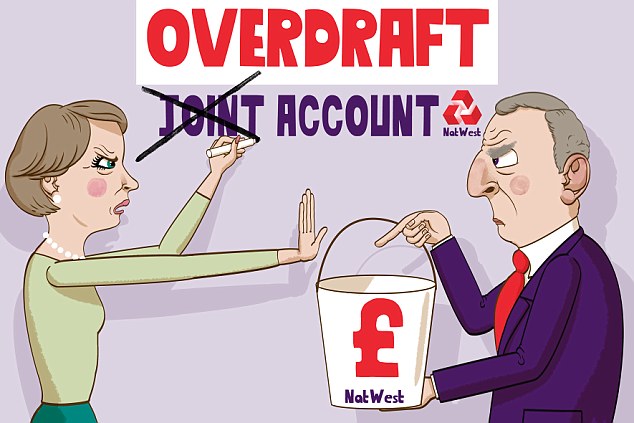 One reader has been made liable for some £40,000 worth of debt racked up entirely by her ex husband on a joint account

After this we may both have to start the process again.

However, following threats requiring police help there cannot now be any contact between my husband and I.

NatWest says I must not only contact him to re-do the paperwork when the debt is cleared but that despite the court order I remain jointly liable for the debt, so he could stop paying it and force me to do so instead.

I am stunned that having got this court order on the advice of NatWest, I find I have wasted two years and a lot of money.

You first contacted me in 2016 when NatWest gave all appearances of trying to be helpful.

The joint account was opened because your husband needed an account for his wages to be paid into, but did not have a high enough credit rating to open his own.

It was used solely by him, but after you separated he ran up a large overdraft for which you were held jointly responsible.

In all, when he left you there were around £40,000 in loans and credit card debts. You were working three jobs to pay them.

NatWest told you and me at the time that if he took over the account you would be relieved of responsibility for it.

So I was appalled when, despite all your hard work and the threat you have lived under, their legal department was uncooperative.

Leaving aside the fact that they suggested you take this course in the first place, they should also have considered your vulnerable position. I contacted the press office making it clear just how badly it would reflect on the bank if they continued to adopt such an intransigent position.

I am pleased to say wiser heads at the bank have now prevailed over the legal numpties. You will be removed from this account and will no longer carry the burden of debt that was not generated by you.

A NatWest spokesman says: ‘We didn’t get this right first time. Having looked at it again we realise we should have done more to help and have since met our customer’s wishes and removed her from the account.’ 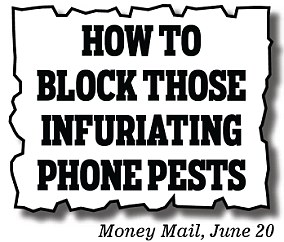 Here are some from our report on how to block nuisance calls and texts from pensions conmen and claims firms:

My phone is ex-directory and this dramatically cuts nuisance calls. Another method is simply not to pick up the phone if you don’t recognise the number. If it’s a genuine call, they’ll leave a message and you can ring back.

It’s not always the case that the caller display shows the offending phone number. Fraudsters are using a technique called spoofing — they ring your home phone, pretending to be a bank or police, and use technology to make the number appear legitimate.

I don’t have a nuisance caller problem. Any incoming calls are answered and, as soon as the caller is identified as someone I don’t wish to hear from, I press a button to ‘blacklist’ the number. I get very few of these calls now.

Having retired from business, where I made many contacts, my phone was getting up to 20 calls a day.

Enough was enough, so I bought a BT8500 system, which blocks all unwanted calls. The numbers I want to get through, I programme into it. Unwanted calls are now a thing of the past.

I tell all unwanted callers that I have to take them through my security procedure — and ask for their bank account number and mother’s maiden name.

It’s time for a class action against regulator Ofcom. It is part of the problem and not fit for purpose. Millions of calls a day are more than a nuisance. Ofcom should call it what it is: harassment.

Many handsets allow you to have a blacklist, but the problem is that persistent nuisance callers are unlikely to continue using the same number and so it becomes a continual battle of catch-up.

Over the past two years, I have called Thames Water many times as we have a leak between the meter and internal valve.

Initially, engineers who came to fix it didn’t have the tools to dig up our front garden. Next, Thames sent an engineer to change our water meter because they said the existing one may be faulty. That engineer said we did in fact still have a leak.

The last call I made to Thames Water was on April 30. I was passed between four people.

No one seems willing to take responsibility as it is ‘not their department’ or I have been put through to ‘the wrong person’.

This is an absolute nightmare. We are paying a £100 per month water bill for a household of two people.

Thames Water apologises for taking so long to sort this out. An area manager has now met you to make the arrangements for the repair.

The leak is on your private supply pipe, not on its network, but it does meet its criteria for a free repair, as have two other leaks which it has previously fixed free of charge.

A spokesman told me: ‘The recent hold-up was down to our repair team not being able to complete their work at the first attempt due to a safety concern.

‘The customer’s bill will be adjusted so he is not charged for the leaked water and a refund will be arranged.’

Thames Water and other water companies have information on their websites on procedures for leaks that are on a customer’s property. In Thames’s case, the option is generally to repair the leak themselves or find your own plumber if you don’t want Thames to do the work or are unhappy with the timescale for the repair.

I cancelled my BT contract when I moved in September. My account was £208 in credit, which BT says has been paid into my bank account — but I haven’t got it. Can you get to the bottom of this?

BT paid the money into the account linked to the monthly bill. This belongs to your partner. You should find it there.

The amount of salary going into my bank account has changed. When I checked my payslip I saw I had a new tax code with a different letter at the end. How can I can find out what this means?

Go to www.gov.uk/tax-codes and you will find a list of the codes issued by HM Revenue & Customs and what they all mean. If you still have questions about your tax code, call HMRC directly on 0300 2003300.

I took out a loan for solar panels after a salesman came to my door. I’ve had them for four years, but the company who sold them to me has gone bust. Do I have any protection if my equipment is faulty?

Check if you have an ‘insurance-backed warranty’ policy. If so, contact the insurer and they should arrange to inspect your system and make repairs free of charge.

If you don’t have one of these policies and the issue is with the equipment rather than workmanship, contact the manufacturer about their warranty. If you incur any costs along the way, contact the firm’s liquidator or administrator. You may be able to make a claim to have your costs refunded.

I booked Virgin Atlantic flights to Orlando for my 55th wedding anniversary and selected seats in the premium cabin so my wife and I could sit together.

But on the return leg, the seats are quite a distance apart. I was told a technical error has occurred and I’d need to pay a surcharge to change the seats.

Virgin says it has no record of technical issues and, as a premium economy passenger, there is no charge to select seats. On your flight, there are only two seats on each side in the premium cabin on the upper deck.

It has found you two seats together in the main cabin and put in a request for two in the upper deck. Unfortunately, it cannot be confirmed until the day of travel.

When my husband died seven years ago, his share of our flat was valued at £290,000, so no inheritance tax was payable.

The flat’s value has since increased a lot. On my death, will my family qualify for the £650,000 allowance given to married couples or just my tax-free allowance of £325,000?

If your husband left his entire estate and his share of the flat to you in his will when he died, his estate would not have attracted any inheritance tax liability.

But bear in mind that if you leave the flat to your family, the personal threshold for both you and your husband could rise to £450,000.

This is because, under rules introduced last year, you get an extra allowance for your main home. That would take the total to £900,000.

It could be even higher by the time your estate is being distributed because the main home allowance is rising.