ASK TONY: Scottish Widows has put my account in someone else’s name

When I logged on to my Lloyds bank account recently the name had been changed and the address was in Birmingham — yet I live in Essex.

All the accounts remained the same but I was no longer the account holder. A similar thing happened in July 2015 when my name was changed. That time it took a month to resolve and I was given £150.

Now, however, I find myself caught between Lloyds and Scottish Widows [part of the same banking group] with each blaming the other. No one is helping me and I’m at my wit’s end.

I have called Lloyds five times and Scottish Widows twice with no success. I am very concerned that sensitive information could be sent to the lady in Birmingham. 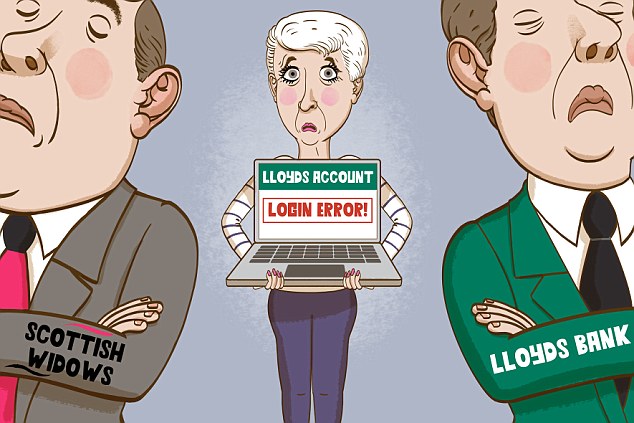 Panic: One reader logged into her Lloyds bank account recently to discover the name had been changed and the address was in Birmingham while she lives in Essex

This is outrageous and it’s equally appalling that nobody will take responsibility for resolving the issue promptly.

Once I intervened, you had an immediate call from Lloyds promising to fix the situation — but when you tried to log on to your account, you could no longer access it.

Lloyds laid the blame at the feet of Scottish Widows. Apparently the details from your pension had been mixed with another customer’s, who has the same date of birth.

But Scottish Widows had already told you it had examined its records back to 2015 to ensure everything was in order. It said the problem must be Lloyds’.

Well, Scottish Widows has now accepted blame and sent fulsome apologies. I have been assured your data has not been breached or shared.

It first offered £250 compensation, which you weren’t happy with, so this was increased to £500. Steps have been taken to ensure this does not happen again.

Every week, Money Mail receives hundreds of your letters and emails. Here are some from our report on how smart meters are expected to cost £9 billion more than forecast:

It is easy to read your meter and fill in the details online.

Not everybody has internet access, but for the majority who do, how hard is it to send a monthly reading to eliminate estimated bills? I’d rather that than have a smart meter.

Different companies fit different meters, so when you change energy suppliers the meters are not compatible.

They then have to be changed, which is just crazy. Who is picking up the cost for this? Consumers in the end.

I’m glad I had mine fitted, I have saved money and have not had to change my lifestyle.

Smart meters are of no use to us. It’s a way for energy suppliers to get their money quicker.

From the tone of the letter EDF Energy sent me, I thought I had to install a smart meter because the Government said so.

Now I find that was misinformation. In the meantime, I’ve had a letter telling me my bills are rising £50 a quarter, and will continue to rise.

No matter the issue, the consumers will never, ever come out on top. The system is loaded so the suppliers always win.

I recently received an upsetting penalty notice from HMRC addressed to my late wife and marked DEC’D [deceased], fining her £100 for being a day late submitting her tax return.

Surely it could have given some leeway in the circumstances? The return was posted by first class recorded delivery to arrive the next working day: October 27, three working days before the deadline. But it was not delivered until November 1.

I appealed, but did not get a response, so I paid the fine. I complained to Royal Mail, too — it apologised and sent me a book of six stamps.

I imagine you felt like telling Royal Mail where it could stick its stamps.

Its letter basically said it was very busy and recommended you use its Special Delivery Guaranteed service in future — which costs a minimum of £6.45.

HMRC provided a very swift, positive response, admitting it messed up and that you should not have been penalised. It will cancel the penalty and pay redress for the upset suffered.

Looking at the letter you received from HMRC, it was actually addressed to ‘the personal representatives of . . .’

Letters addressed to a recently deceased relative can be upsetting, but I feel here the addressing was done correctly.

Royal Mail says it was sorry to hear of your experience. A spokesman adds: ‘We do advise customers who are sending something important or valuable to use our Special Delivery Guaranteed service if they require a guaranteed delivery day and time.

‘For an additional fee, it offers consequential loss cover for documents that, if late, could result in penalties.’

I have read that the Government plans to donate unclaimed pension money to good causes.

Can you get your cash back if you later discover a pension you had forgotten about?

Yes. The Government plans to give lost pension pots to charity in the second stage of a scheme that already grants money in dormant accounts to good causes.

But you will be able to get back your cash if you later find the paperwork for it.

Finally I am going to try to claim a refund for the money I’ve spent on payment protection insurance (PPI) as I believe it was mis-sold to me.

Do you have a template form I can use? And when is the deadline?

The deadline is August 29, 2019. Download a template letter here.

After nine months a big, thick band known as screen burn appeared, making it difficult to see anything. Currys refuses to exchange it for a working one.

Currys has now arranged for the television to be picked up and repaired. It has also offered £150 as a goodwill gesture for failing to handle your complaint properly in the first place.

We have HomeCare cover with British Gas and last year it failed to service our boiler.

We were promised a refund, but, despite calls and emails, nothing has come of this.

British Gas apologises and has now sent you a refund and a £50 goodwill gesture.

I recently found two life insurance policies from when I was in the Forces.

I’ve been in touch with Phoenix Life, but it requested bank statements from 40 years ago, which I don’t have.

I can’t recall cashing them in. Can you help?

I wonder if any employee at Phoenix Life has bank statements from the Seventies? Maybe you’ll find them by your platform shoes, flares and Chopper bike.

Phoenix Life agrees that it should have confirmed the policies had been paid out. It shouldn’t have asked for 40-year-old bank statements and will send you £75 by way of apology.