ASK TONY: Tesco refused to tell me about my mother and fraud

After my mother passed away, I noticed large payments from her bank account to Tesco. She employed a cleaner/‘carer’ who knew the PIN of her debit card. I don’t want to think that this person has abused my mother’s trust and there may be an innocent explanation.

I contacted Tesco to ask if they would release details of my mother’s shopping history. At first they were willing to do this, but then did a volte-face.

I do not want to go to the expense or distress of a solicitor when Tesco could employ a modicum of common sense and release the details to ascertain whether my mother has been the victim of fraud. I have no other motive than to satisfy myself that someone my mother trusted was worthy of that trust. K. H., by email. 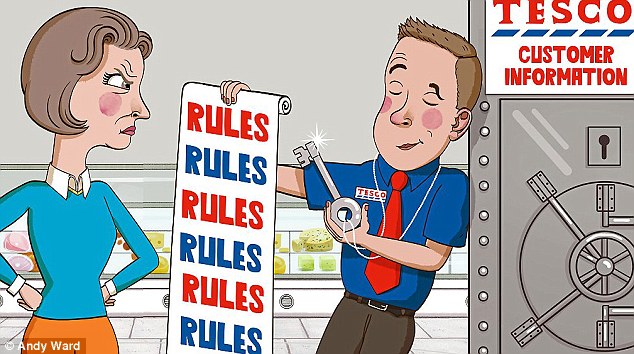 One reader said after their mother passed away, they noticed large payments from her bank account to Tesco and decided to investigate

TONY SAYS: What objection could Tesco have to sharing your mum’s shopping details?

Judging from the responses you were getting, some self-important twerp had got himself tangled up over data protection. Instead of checking what the regulations were regarding sharing this sort of information, he chose to make your life difficult.

Your mum died leaving no will. The banks were helpful and did not ask for Letters of Administration in order to release assets. Yet Tesco demanded them in order to share your mum’s shopping lists! They also asked for written authorisation, signed and dated by the personal representative of the deceased person.

And they asked you to complete a subject access request. This is basically a formal request to release data. How utterly daft!

As you said in your longer letter, Tesco wanted more information than you had provided to get bank statements, your mum’s medical history and her post-mortem report. The Information Commissioner’s Office confirmed to you that neither the Data Protection Act nor the General Data Protection Regulations applied.

Finally, Tesco relented and provided the information you had requested. But its actions throughout this affair were unhelpful and shameful.

A Tesco spokesman says: ‘We’re sorry for Ms H’s loss. In order to protect our customers we ask for proof of identity before sharing customer details. As soon as she did this we were happy to share the information requested.’

I asked about sending you some flowers or vouchers by way of apology. No offer was forthcoming, though it did waive the fee that is normally charged for providing old shopping lists.

Every week Money Mail receives hundreds of your letters and emails about our stories. Here are some of the best from our article about the young people who employ family members in their own business ventures.

Good for them. They are using their knowledge of what sells and making money, not relying on handouts. They will be homeowners before their peers.

I work with my husband and I wouldn’t have it any other way. If you are a tight-knit family, it can work very well.

I was touched by the relationship between Daniel and his granddad, Brian. He will remember their time together when he has grandchildren of his own.

I couldn’t think of anything worse than wearing someone else’s smelly trainers. It’s obviously a good business, though.

It’s never been easier to make a bit of extra money by selling things on the internet.

My Halifax mortgage payment is usually made on the 27th of the month. For some reason the December payment was not made. I picked this up on January 4 and made a payment — four working days late.

Halifax reported this to credit agencies as a late payment, damaging our credit score. But its terms and conditions say that a payment must be ‘a full 30 days late’ to appear on a credit report. O. R., Greater Manchester.

TONY SAYS: Halifax argues that when you signed up for your mortgage you gave it permission to share information about your account with credit reference agencies.

It further says that it is ‘required to provide a month-end report of outstanding payments to the relevant credit reference agencies’.

It argues that in providing the information at the end of December it was following procedure. However, this is not a requirement; it is merely an agreement with the credit reference agencies — which are businesses, not regulators.

Halifax says if the late payment was caused by your bank, you should ask for a letter confirming this and apply to have a correction applied to your credit file.

You had also contacted the Financial Ombudsman, a fact of which I was not aware when I intervened because you did not tell me. I, therefore, stepped back and awaited its opinion.

It has recommended against your complaint being upheld. It says that because no payment was made in December, Halifax was entitled to record it. You may choose to contest this view and ask for a final opinion.

I would like to remind other readers that if the Financial Ombudsman is involved, I cannot investigate your complaint.

I was delayed at Birmingham airport for five hours in 2012 on a Ryanair flight. EU rules allow a backdated complaint up to six years ago. Ryanair agreed to pay me €800 more than three months ago, but hasn’t. P. W., West Midlands.

You are quite right that you are entitled to compensation. Ryanair has now put a cheque in the post.

I have lasting power of attorney for my aunt. British Gas thinks she has an account despite her flat having no gas supply. Two letters have arrived, one with a final bill of 25p. J. E., by email.

British Gas apologises for the delay, which it blames on an industry database. A spokesman says: ‘Although we updated our records and closed down the gas account, the industry database remained to be updated.’ You will not receive any more bills.

I have seen accounts and investments labelled ‘FSCS-protected’. What does this actually mean? A. B., by email.

If your money is covered by the Financial Services Compensation Scheme (FSCS) you’ll be able to get some of it back if the holding company goes bust. Deposits are covered up to £85,000. Investments are protected up to £50,000. You can check regulated firms here: bankofengland.co.uk/prudential-regulation/Authorisations/which-firms-does-the-pra-regulate

I referred a complaint to Resolver and want to call to chase the outcome but I can’t find its telephone number. K. Y., by email.

Resolver does not have a customer telephone line. It says this is to keep its costs down. Email the customer service team at: support@resolvergroup.com

Write to Tony Hazell at Ask Tony,Money Mail, Northcliffe House, 2 Derry Street, London W8 5TT or email asktony@dailymail.co.uk — please include your daytime phone number, postal address and a separate note addressed to the offending organisation giving them permission to talk to Tony Hazell. We regret we cannot reply to individual letters. Please do not send original documents as we cannot take responsibility for them. No legal responsibility can be accepted by the Daily Mail for answers given.