A friend gave me some Thomas Cook Travel Bonds worth £350 to go towards paying for a holiday.

It states on the back of each: ‘This bond is valid indefinitely.’

My local Thomas Cook said it had not seen them before and would have to make enquiries. It didn’t contact me again, so I went back a week later.

This time, I was told that it would accept only the £25 Travel Bonds. I asked why and the assistant replied that she didn’t know. 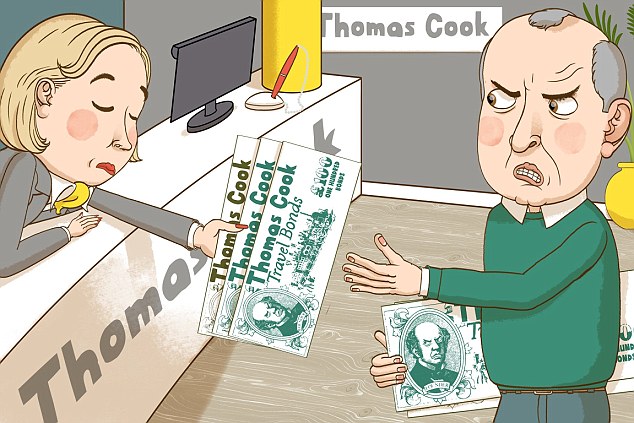 Well, I know. It’s because she was wrong. The bonds you held were issued in June 1989 — and, 29 years later, they are still valid.

They were rather grand-looking things bearing a picture of Mr Cook.

The £100 bonds featured a drawing of his first steam train excursion, from Leicester to Loughborough, in 1841, while the £25 ones showed the London to Paris Imperial Airways service in the Thirties.

When I contacted Thomas Cook, it resolved the problem swiftly, telling me: ‘Travel Bonds are an early version of travel vouchers and were phased out as we introduced our latest gift cards more than 15 years ago.’

It added that it was very sorry for the mix-up in store.

It has contacted you to advise it will be happy to accept your Travel Bonds towards the holiday of your choice.

I must say, given a choice between a gift card as a present and these lovely-looking bonds, I’d pick the bonds every time.

Every week, Money Mail receives hundreds of your letters and emails about our stories. Here are some from last week’s article about banks charging families thousands of pounds to act as executors of their loved ones’ wills…

I am a qualified solicitor and offer basic wills for £40. Why? Because I’m not greedy — unlike every other member of my profession.

Banks are for banking and nothing else. Get a solicitor to draw up your will, take investment advice from an independent financial adviser and get insurance from an insurance company.

A lot of this kind of information is hidden in the small print. That is why people get caught out so easily.

Banks are always saying they have learnt their lesson from past mis-selling scandals. Then another one comes along and they carry on regardless of fines and warnings from watchdogs.

A hundred years ago, hardly anyone had any serious assets. Today, many people die with complex estates. Executors should be recompensed, but the very idea that a percentage charge is legitimate is absurd.

On January 24, a delivery van pulled into our driveway, then reversed off very fast, hitting our 2005 Ford Fiesta.

Our car has very low mileage and had previously been in excellent condition.

I passed details to our insurer, M&S Insurance, and, after a few days, an accident management firm called to say the incident had been placed in its hands.

We then heard that an engineer’s report had said it would be uneconomical to repair the car.

We were told we would receive a cheque and that a salvage agent would contact us to arrange the collection and disposal of the vehicle.

I do not wish my car to be written off! I fail to see how the repair work can be estimated at around £2,500.

Finally, we agreed M&S would send a cheque and I would get the repair work done myself.

This was months ago. But the ‘at-fault’ insurer still has not raised payment.

It now seems that the delivery driver had been in a hire car, so the management firm has been chasing the wrong insurer.

Why do insurers insist on adding complexity by employing accident management companies? They regularly seem to be a source of frustration, complication and misunderstanding.

M&S Insurance argues that, despite its excellent condition, the market value of your car is lower than the cost of the repair, hence the initial proposal to write it off.

When someone is involved in a non-fault accident, their insurer will typically pursue the third party’s insurer.

So why the delay, then? M&S diplomatically says the insurance status of the third-party vehicle is ‘inconclusive’.

Usually, when it is not possible to recover the costs from the third party, customers can claim via their own insurance, but they have to pay the excess agreed on their policy.

Having said this, M&S accepts you have had to wait a long time so, as a gesture of goodwill, it has offered to send you the money and cover the cost of your policy excess, rather than wait for the third party to settle the claim.

Your car is now insured under what is known as Category S, meaning that it is listed as having been written off as a result of structural damage.

As long as M&S is able to recover the money, your policy will not be affected — but if it cannot, then I’m afraid it will affect your no-claims discount.

I heard that people who applied for power of attorney between April 2013 and March 2017 are entitled to a refund.

Will I get the full amount back? And does this apply to people in Scotland?

You can claim a refund only if you applied in England or Wales. Scottish laws are different.

If you are eligible, you will get a portion of the application fee back — from £34 to £54.

How much you get depends on when you paid to register your document. You’ll also get 0.5 per cent interest. For details, visit gov.uk/power-of-attorney-refund or call 0300 456 0300.

I read a recent Money Mail article about equity release that mentioned a guide by editor Dan Hyde. How do I obtain a copy?

Call 0800 156 0150 for a free copy of the Daily Mail guide, produced in partnership with expert adviser Key Retirement.

That number puts you through to someone at Key Retirement who will send you the guide in the post and provide information on how to pursue equity release further.

Alternatively, you can visit keyretirement.co.uk/mail

Virgin said I had been charged £3 a day for internet for which I have no use. It is refusing to refund me.

Virgin says that it believes your phone automatically connected to the internet due to the existing settings on the handset.

A spokesman says the company has written off the full £84.50 bill as a goodwill gesture.