My father, who died six years ago, had an account with Ulster Bank. I have been trying — unsuccessfully — to retrieve the £400 remaining in the account.

The bank refuses to pay this unless my brother goes with me to sign for it. However, while the bank is in Northern Ireland, he lives and works in Morocco.

I have told them this, but they keep putting obstacles in my way. 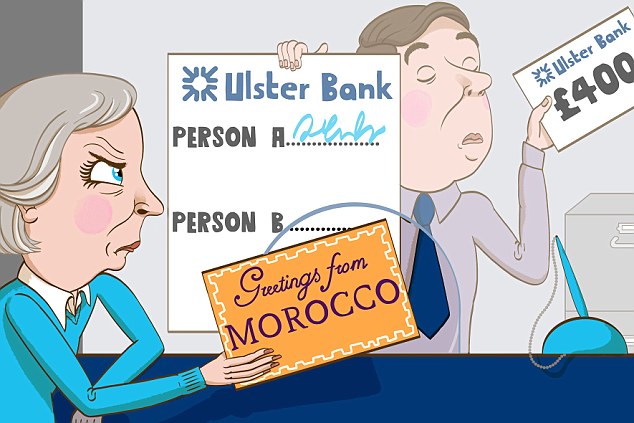 Ulster Bank is withholding a £400 from the account of a customer who died six years ago claiming they need his son, who lives in Morocco, to sign for it in person

A great many Money Mail readers will be able to empathise with your predicament — despite improvements over the past few years, banks can still make it tricky to retrieve money belonging to relatives who have died.

Ulster Bank tells me it used to require that either all the next of kin or executors of an estate sign relevant paperwork as a way of protecting customers’ accounts.

However, a number of years ago, it changed this process, so that only one signature from a next of kin was required.

So why on earth were you not then contacted? Well, it seems that Ulster did flag up this type of account for proactive follow-up at the time the processes changed but, due to an error, yours was missed.

In light of this, the bank has apologised for the inconvenience caused. The branch manager has contacted you and arrangements have been made for you to receive the money — it will pay the money owed, plus interest.

In addition, you have been offered £100 compensation. You have been provided with a named complaint-handler who will deal with your case personally.

An Ulster Bank spokesman says: ‘We take the safety and security of all customers’ accounts very seriously and have controls in place to ensure that their money is only accessible by authorised individuals.

‘We continually review these policies and, in recent years, we have changed the way we treat access to the accounts of deceased customers.’

Here are some from our article on a new service, which won backing on TV’s Dragons’ Den, that switches households to a new, cheap energy deal automatically each year…

The big problem with these kind of comparison services is that they make money by charging the firms they promote. You’ll often find far cheaper tariffs if you go to the suppliers directly.

I started to sign up, but then I felt a bit uncomfortable when they wanted my bank details. I prefer to stay in control of my own bills and bank account.

I watched them on Dragons’ Den and, on the face of it, Look After My Bills sounds like a nice idea. But I am a bit old-school and, if something sounds too good to be true, I tend to steer clear.

I don’t like the fact that they rule out firms they feel provide bad customer service. Would it not be better to have two searches — one for price and another for customer service?

Look After My Bills, Flipper, Labrador . . . I don’t know which one to go with. Perhaps someone should create a comparison site to help us decide!

I always sign up to one of the group deals where thousands of people join together to get a bulk discount. The prices are always very good.

It’s a shame you can’t switch so easily with a smart meter. I’m glad I have resisted the attempts of all my various suppliers who wanted me to install one.

I despair at the hopeless service of some energy suppliers. I’m still trying to sort out the incorrect transfer of my gas meter number seven months after I switched. At one stage, I had three gas meters allocated to my account.

Last September, we booked a holiday to Thailand with Thomson. A month later, we decided to cancel it. I emailed to ask the company to transfer my £1,000 deposit to another holiday.

A month later, I emailed again, as I had not received a reply.

Shortly after that, I was told that it was too late to get my money back. I feel aggrieved that I’ve lost all of my deposit.

You tell me that the background to all of this is that your son was working in New Zealand, and Thailand seemed like an ideal place for you all to get together.

As it turned out, not long after booking, he decided to return home and so the holiday became unnecessary, especially around the time that you’d booked.

While I can understand your situation, I cannot really see why TUI, which owns Thomson, should return your deposit just because you changed your mind.

Travel insurance wouldn’t help, either, as ‘changed your mind’ is not a reason for a payment.

Having said that, I don’t think it dealt with your email requests very well. The problem with emails is that we can never be sure they have been read or dealt with.

As far as TUI is concerned, you cancelled your holiday first and then, two days later, requested an amendment. Its argument is that, as the holiday was cancelled, there was no booking to amend.

It further points out that when cancelling online, there is a clear option to change your booking to another holiday, but you did not take this.

Regulations covering package holidays say the firm should try to resell the holiday and can only make a ‘reasonable and justifiable’ charge. Is £1,000 for cancelling a holiday three months before the travel date reasonable? Well, the industry standard is that cancellation 90 days or more before a holiday means you lose your deposit.

Cancel nearer the date of travel and you may be on the hook for some or all of the final bill, too.

While TUI has been inflexible on this, I don’t feel you have helped yourselves by not following the proper procedures, so you have learned an expensive lesson.

A TUI spokesman says: ‘We’re really sorry to hear that your reader is unhappy following his decision to cancel his holiday. He could have contacted us at any time and we would have been happy to amend his booking to an alternative.

‘Unfortunately, as he went straight ahead and cancelled, he incurred a loss of deposit, as per our cancellation policy, which he would have accepted at the time of booking.’

I discovered that the Thames Water water pipe outside my home was leaking after my water bill shot up.

Thames Water says it will pay for a new pipe outside my house, but that I must pay for a new connecting one inside. This seems unfair. Can you investigate?

Thames Water says that the leak is in your supply pipe.

However, as part of a drive to reduce leakage, it is offering to fix leaks on customers’ supply pipes free of charge — even though these are the customer’s responsibility.

The company says it has agreed with you a time to complete the repair work.

Royal Mail lost my signed-for letter containing vouchers worth £18. When I complained, it admitted fault and apologised, but offered only six first- class stamps in compensation, which hardly makes up for the loss.

After I contacted Royal Mail, it agreed to cover the cost of your lost vouchers. It advises customers to use Royal Mail’s Special Delivery service when sending items of value.

A spokesman says: ‘We have reviewed this case and made a goodwill payment to Mr M.’

My Ryanair flight from Girona, Spain, to Birmingham was cancelled last month due to bad weather.

I was told that I would be paid £268.51 in compensation and the airline sent a cheque in the post. However, when I tried to pay it into my bank account, it bounced. What has happened?

Ryanair has now sent you the compensation money via bank transfer. This week, it admitted that you are not alone and a number of cheques had bounced this month due to an error.

A spokesman from the airline says: ‘Due to an administrative error, this cheque was issued without a required signatory. We apologise for any inconvenience caused.’

I let a friend use my credit card a few times and have since noticed a number of withdrawals I haven’t made, totalling £1,600.

The fraudulent transactions mean I owe some £100 in charges and interest, too. I’ve reported it to the police and my bank, TSB, but no one seems able to help.

TSB has looked into your case and, based on what you told the police, believes that your card was likely used by your friend without your permission.

Banks typically refuse to refund fraudulent payments if customers have shared their card details. In this instance, TSB recognises you are a vulnerable customer and has wiped the debt and charges.

A spokesman says: ‘Customers have a responsibility to protect their PIN. Customer negligence is a consideration, however it is not the only factor.’