ASK TONY: Virgin cancelled our flights to Antigua – then broke their promise of a 75% refund

A friend and I travelled to Antigua with Virgin Holidays and chose to fly Premium Economy so we would have more legroom.

On the morning of our return journey, we received a text saying that the flight was cancelled and that we had been booked on a BA flight instead.

But when we arrived at the airport, we were told that there were no premium seats available.

Later, we received a letter from the Virgin rep saying we would be refunded 75 per cent of our fare home.

I thought this would be straightforward, but Virgin Holidays said it was waiting for information from Virgin Atlantic.

After several more phone calls, we were finally offered a refund of £75.10 each — far less than what was originally promised. 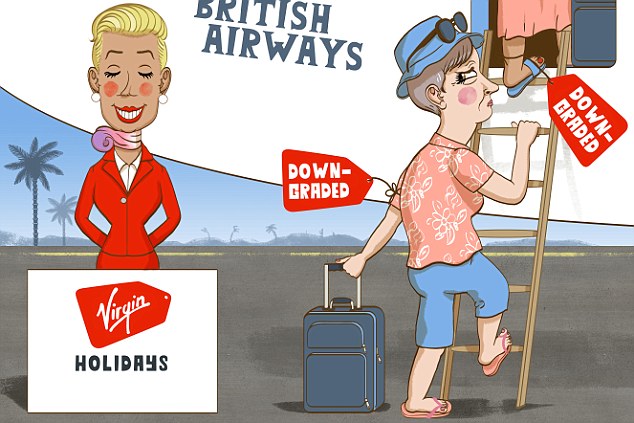 Air rage: Virgin Holidays failed to properly refund a  premium economy customer when they cancelled his flight and switched him onto a BA jet instead

You began chasing your money in early October, soon after returning from your holiday. Three months later, in mid-January, you wrote to me.

I sent your letter to Virgin Holidays and spent several more weeks poking and prodding with very little response.

I began to wonder if it was hoping that if it ignored us for long enough we might go away — not what one might expect from the Virgin brand.

Then, finally, at the beginning of this month, I heard back. Apparently, there was some ‘miscommunication’ between Virgin Holidays and Virgin Atlantic.

As per the letter you were sent, customers who are downgraded are entitled to a 75 pc refund of the fare and taxes.

In total, you and your friend are entitled to £515.70, rather than the £150.20 you were offered. Virgin has agreed to refund the difference.

Every week, Money Mail receives hundreds of your letters and emails about our stories. Here are some of the best from our report on whether the rollout of smart energy meters is a good or bad thing:

There is no logic to the concerns over gas explosions and fires. Surely the same could happen with an old-style meter. ‘Smart’ or ‘dumb’ shouldn’t make a difference if a meter is fitted properly.

We are thinking of installing a smart meter in our holiday let. It would be really useful to get automatic meter readings when we are not there and have an idea of how much gas and electricity is being used by guests.

I think it’s unfair that we all have to pay for smart meters through our tariffs whether we want to have one fitted or not. If I’m sure that I don’t want one, why should I be forced to fund other people’s preferences?

I believe if something isn’t broken, don’t fix it. I’m very concerned about smart meters and think they’re the thin edge of the wedge.

Once installed, providers could charge more for using energy at different times of the day.

This will ultimately penalise working people who can only put on a wash in the evenings or at weekends.

Concerns over hacking and health sound far-fetched to me. It’s like contactless cards again; at first people are wary of new technology, but give it a few years and everyone will be using it.

I take issue with the way companies constantly push them on customers.

Smart meters serve a purpose for families with teenagers who play video games night and day, or people who leave on lights and heating. But many people are able to manage their energy usage easily without.

In late winter during a bad storm, the wind lifted my garage roof and dislodged block work, which landed on my car causing damage to the paintwork.

I arranged for the repair via my insurer, Direct Line, but now my premium has increased by £200. I am confused because I thought I had no-claims protection.

I called and was told the no-claims protection is for the discount and not the premium.

Direct Line agreed to change the record of the incident from accident to weather damage and says it paid out £1,900 including labour. But the garage told me it did not put any parts into the car, and the bill it sent was for £1,029.

This business of premiums rising despite people having a protected no-claims bonus is a perennial gripe.

Insurance firms argue customers are protecting only the discount they get on the initial premium.

However, it is clear customers regard it as something quite different and believe they are protecting the premium itself.

It is something both the insurance industry and regulator need to look at because, whether deliberately or inadvertently, customers are being misled.

Direct Line confirmed to me that no-claims discount protection does not stop the premium changing when the company alters its view of the risk because the claim has been made.

Why it should feel the risk involved in insuring your car has increased after an accident caused by high winds is beyond me.

Surely, if anything, the risk would drop after the owner of the building has had it repaired.

Direct Line further says the garage provided you with incorrect figures. After first costing the repair with no new parts, the garage contacted the insurer for authorisation to use parts which were required after all.

But Direct Line has admitted the figure is still incorrect and it will adjust this.

However, it says your premium has been affected only by the fact that you have made a claim, not by the final figure. In other words, your only option is to tough it out and seek cheaper cover next year.

I receive a £2,000-a-year war pension as I was injured while serving in the Forces. Is it taxable?

My carer topped up my EE mobile phone with £25 credit at the local Co-op two months ago, but I’ve just tried it and there’s no money left and the phone has been blocked. Can you help?

EE can’t explain what went wrong and says your account is still active. It apologises for the confusion and has credited your account with £25 as a goodwill gesture.

I held a large number of shares in Woolworths Group plc when it went under. Clearing out old paperwork, I have found my certificates and would like to know if these are worth keeping.

Is there any chance of them being worth anything, or should I just destroy them?

Woolworths was finally dissolved in 2015 and, as a shareholder, you would have been on the share register and contacted — numerous times, no doubt — about anything you were owed.

I asked Tim Cockerill, of stockbroker Rowan Dartington, if there is anything you can do now. He says: ‘Sadly, the certificates no longer hold any value. You could chuck them out — or another idea might be to frame and keep them as your own slice of British retail history.’

My insurance company moved me into rented accommodation between August 2014 and February 2015 while work was carried out on my home.

Since then, Scottish Power has sent me bills ranging from £800 to £2,600 and I can’t seem to resolve the matter.

Your case was referred to the Energy Ombudsman, which asked Scottish Power to provide the opening and closing meter readings it had used to calculate your bill for that seven-month period.

These readings confirm that you owe slightly more than £2,000. Scottish Power has set up a payment plan of £43 a month for the next four years to clear the debt.

Our main property is worth around £700,000. If we leave it to our two children soon, can we/they avoid inheritance tax?

Such a simple question. So many implications! There is no way to give a complete answer based on the information you have provided — your wording implies you have another home tucked up your sleeve.

In addition, there is the main residence allowance, currently £125,000 each, which brings you to a total of £900,000 of IHT-free assets, assuming your main residence is left to your children (or other direct descendants).

Your question implies your assets are greater than this. Perhaps you are considering giving your home to your children and continuing to live in it? In that case, you would be considered to retain an interest in the home, so it could trigger IHT and capital gains tax implications.

Clever dodges using trusts were stamped out by Gordon Brown when he was chancellor.

If you gave the home to them now, moved out and had no further interest in it, then it should drop out of your estate completely after seven years.

If you both die before seven years is up, the first £650,000 would be set against your nil-rate bands, assuming the house is jointly owned. If you die after three years, the tax on the top £50,000 would reduce each year from an initial £20,000 to zero.

Again, there could be capital gains tax implications — and you would have lost control of a valuable asset. I urge you strongly to take professional advice from an accountant or a solicitor specialising in estate planning.