ASK TONY: Virgin is billing my elderly aunt £80 a month, but I can’t see why

My elderly aunt is in a rehabilitation unit following a lengthy period in hospital.

Looking through her bank direct debit I found she had a monthly payment of £60.76 to Virgin Media and £22 to Virgin Mobile.

She doesn’t understand why she has these contracts. She has an ancient TV and landline phone, and has never had a computer or, as far as I can remember, used a mobile.

I would question the selling of such expensive contracts to someone who clearly doesn’t understand what they are signing up for. 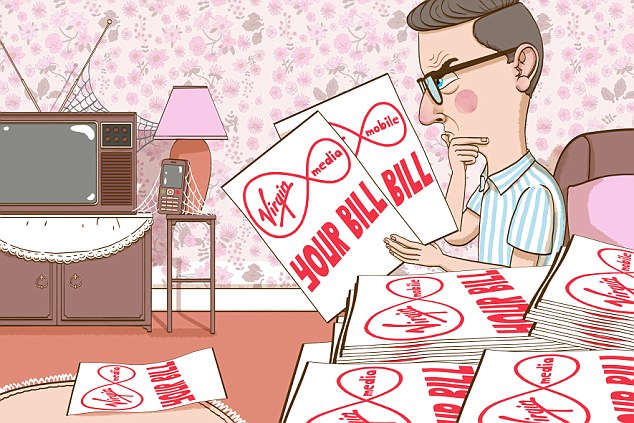 Hefty bills: One reader looked through his elderly aunt’s bank direct debit and discovered she had a monthly payment of £60.76 to Virgin Media and £22 to Virgin Mobile

You had problems when you contacted Virgin Media because you do not have Power of Attorney over your aunt’s affairs. Therefore, the phone operative would not discuss the case with you or cancel the contracts.

I faced similar difficulties initially as Virgin needed permission from your aunt to speak to me.

So please, if you are writing on behalf of someone else, if possible, get them to sign one of the waiver forms you can find on the thisismoney website.

The situation is that your aunt had a TV and landline package for £37.85 per month. There was no broadband.

Much of the extra, pushing the bill up to between £45 and £70 a month, was because there had been regular calls to an 0845 personal emergency alarm number.


She also had a £22-a-month phone contract taken out in August 2013. Virgin confirms she does not appear to have used this for at least the past six months.

As a goodwill gesture it will be refunding all of the payments on this account — a sum that should be close to £1,200 — and has switched the SIM to pay-as-you-go to prevent further charges.

Having reviewed the home phone account, it will be making a goodwill gesture to cover some of the costs of her personal distress alarm.

Your aunt’s case shows the importance of making sure those with such facilities are on phone contracts that include 0845 — or other non-geographic numbers often used by the emergency services — as part of their package.

A Virgin Media spokesman said: ‘Under data protection laws and to protect our customers’ accounts, we are only able to cancel an account either with the account holder or someone who has legal Power of Attorney.

‘Unfortunately your reader’s nephew does not have that power, which was why our adviser would not let him make any changes to her account.’ 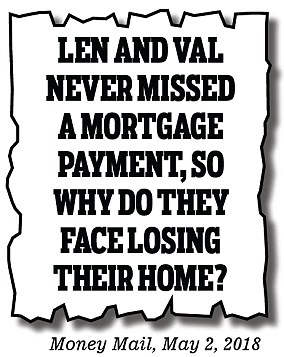 Every week Money Mail receives hundreds of your letters and emails about our stories.

Here are some of the best from our report on how a couple face being evicted by Santander because they can’t repay their interest only mortgage.

They have been treated really badly by their lender, Santander. In this day and age, you expect lenders to have more empathy, for their senior citizen customers, but it seems to be the opposite. In one word it is greed!

We, too, are being forced by our mortgage lender to sell our home of 15 years, which we adore, and move into rented accommodation.

They tell us they are not prepared to extend an interest-only mortgage to people over 75, even though we have never missed a payment.

This is a national disgrace. It will cost far more for the state to support thousands more like us if this situation continues.

This couple may have paid the interest, but haven’t made a single payment towards reducing the capital.

I had to struggle to pay my mortgage, and never expected any help with it — I just went without luxuries. I don’t think Santander is being unreasonable.

Unless you’re expecting a large inheritance or can save enough to pay off the capital part of the loan, avoid interest-only mortgages or you’ll end up like this unfortunate couple.

It does seem this couple had a lot of bad luck with illness and job losses.

But when they moved to interest-only, they should have tried to make overpayments along the way.

We contacted J. P. Morgan Asset Management about our investment Isa, which in 2014 was worth just over £31,000.

They told us they could not find the account and requested contact in writing. They then said it had been transferred to our son, Simon.

We don’t have a son called Simon and told them this. We have never been sent documents regarding any transfer.

Despite seven phone calls we have still not got to the bottom of this, nor has our money been returned. J. P. Morgan Asset Management also appears very reluctant to put anything in writing and we are having to deal with them by telephone.

I can only imagine your shock when you discovered that more than £31,000 had apparently been transferred to a third party.

Your initial contact with J. P. Morgan was on January 24. You might have thought that having been told they had made an error with a substantial sum, they would have made it a priority to find your money.

However an investigation was only started two weeks later, when you made a follow-up phone call. And it was only resolved on April 13.

J. P. Morgan says that ‘due to the historical nature of the complaint, it was reviewed extensively by a number of departments which meant the investigation took longer than was initially anticipated’.

It seems that in 2014 someone with exactly the same name as you contacted J. P. Morgan Asset Management, sending a death certificate for his father. It closed down and transferred assets from your account by mistake.

It has now contacted you to explain and to apologise for the inconvenience caused. Your funds have been reinstated — something which should have been done immediately in my opinion — and you have received £500 compensation.

It says that this investigation took much longer than normal due to its complex and sensitive nature. Internal processes have been reviewed to ensure such an error is not repeated.

If I top-up my state pension by purchasing Class 3 National Insurance years, how long does it take to show up on the State Pension Forecast website as an increase in pension?

I made a contribution on behalf of my wife a couple of weeks ago but it hasn’t yet resulted in an increase in forecast.

The Department for Work and Pensions says when the payment has been cleared it should appear on the customer’s online State Pension forecasts in three to five working days. It can take longer for a cheque to be processed.

I bought a new boiler from British Gas in December 2017 for £1,709. I paid by cheque and my bank confirmed this was cashed a month later.

British Gas has since denied any knowledge of the cheque and is now sending me reminders to make the payment, even threatening me with debt collectors.

I’m 92 years old and am now afraid to open the door to anyone in case British Gas has sent bailiffs.

British Gas says it made an administrative error and will be contacting you personally to apologise for what’s happened and to offer you £75 as a goodwill gesture.

Can I pay taxes to HM Revenue and Customs by cheque?

Yes. Send a cheque to: HMRC Direct, BX5 5BD, payable to HM Revenue and Customs, followed by your Unique Taxpayer Reference (UTR) number. You should include any paying-in slip HMRC sent you.

My home is in my name, although my husband has rights to live in it after I die. I want to pass ownership to my daughter.

Will I be able to benefit from the extra inheritance tax-free allowance for married couples who wish to pass on their houses to their children?

Sarah Paton, associate and inheritance tax expert at Irwin Mitchell Private Wealth, says that it does not matter that your husband is living in the house.

Your family should still benefit from both your £325,000 inheritance tax-free allowance, plus the extra £125,000 for families who wish to pass on homes to children.

It means you can currently leave £450,000 to your daughter without the taxman taking a share.