My late partner had a pension handled by Mercer.

My son sent the firm the forms and death certificates on November 3, so I could receive the spouse’s benefits I am due. We received them back on November 10.

We heard nothing, so called on December 22 and were told it was with the administration department.

I am 62 and not in good health. I have a serious lung disease, I’m recovering from a major operation and I’m waiting for another, so I could do without this hassle — and I could do with the money. 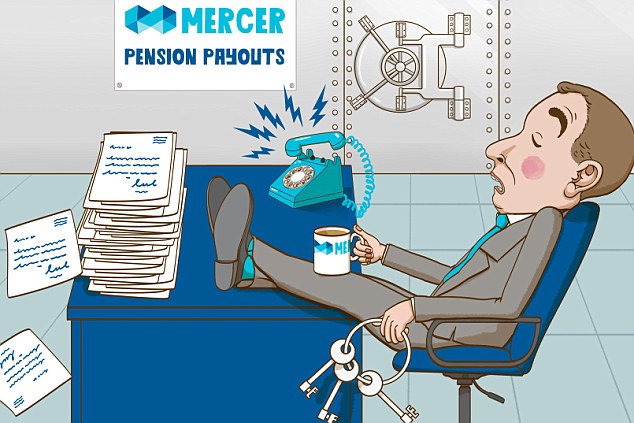 I was appalled when I read your letter and even more so when I spoke to you.

When I contacted Mercer, it implied that the issue was resolved and that it had written to you to confirm the pension arrangements.

I was also told it had responded fully to your complaint in a letter dated February 28.

Of course, I checked. You told me you were ‘still waiting, still none the wiser’. You said no one had phoned you back or responded to your emails.

So I gave Mercer an almighty boot up the backside — and this time, someone did phone you. They said they were on schedule to transfer the money in two days’ time. So why on earth hadn’t anyone bothered to tell you this?

The pension cash is 50 per cent to yourself and 25 per cent to each of your children. You will receive a spousal pension, too.

There is the question of compensation, too. You were sent a £100 Marks & Spencer gift card, but you told me your children were also promised gift cards, which did not materialise. Mercer says they have now been sent. It has also sent you flowers and a letter of apology.

If a regulated company made claims to get investors to pay into a pension scheme, but then back-peddled on the promised terms and refused to return the money originally invested, they would be hit by some harsh intervention by the regulators.

Why is the UK Government allowed to operate to an entirely different set of standards?

If the Government can’t say whether it’s worth topping up, it shouldn’t take your money in the first place. This is outrageous.

I must have been lucky. When I called, I was quickly told that I have already paid enough and that paying for two missing years wouldn’t make any difference to my pension. It is possible to receive the correct advice without spending money.

Find out the cost of paying for those missing NI contributions and use the cash to buy Premium Bonds. You may not win — but at least your money will be safe.

My neighbour sought financial advice and was fleeced for thousands of pounds, wiping out any benefit she hoped to enjoy. It’s not fair that HMRC will not give financial advice.

In February 2017, I received a cold-call, suggesting I change energy supplier to save money.

I agreed to move to Green Star Energy, providing it sent me written terms and conditions.

To this date, I have not received these. What I have received are letters, calls and invoices demanding payment.

It appears that Green Star Energy has hijacked my account. Meanwhile, I have continued to send payments to my previous supplier.

I tried to reason with Green Star, but it refuses to accept I never agreed to the change and has now sold my debts to debt collectors. They respond to me by shouting and telling me to see the Ombudsman.

As your complaint stems back to the cold-call you received, I asked for a transcript.

In this, you agreed to the switch, but I cannot see that you made it conditional on anything.

However, cold-calling by energy companies and brokers is at best a dubious practice. Personally, I would ban it. This call was definitely on the hard-sell side, with the salesman making lots of leading statements and you agreeing. But you provided your full details and made it clear that you were happy to move firms.

You were given a number to call should you wish to change your mind. Green Star Energy says you did not attempt to cancel the contract within the 14-day cooling-off period, but did raise a complaint on March 13 last year.

You chased on March 27 and were told that the complaint had not been upheld because you had agreed to transfer.

There is a disparity over how the later phone conversations developed, too. You say the person shouted at you, they say you hung up, so they have been unable to offer a resolution.

So, here’s what’s on offer now: Green Star will allow you to terminate your contract without penalty if you pay what you owe.

There is no dispute that you have used the energy, so I suggest you send it the meter readings and call an end to this saga.

You say you have continued to pay your previous supplier, which would suggest you have built up a credit. You should check and ask it to repay this — it could go towards your Green Star bill.

I want to cancel the monthly payment I set up with giffgaff, my mobile phone network, but the website doesn’t recognise my name, email address or password and there’s no contact number.

GiffGaff is entirely web-based and does not have a call centre.

When I tried to get in touch, I had to set up my own online account and then could only submit your questions via its website.

If you still struggle to access your account, raise a complaint here and a member of staff will advise you via email.

I received an email from the DVLA, claiming I’m due a vehicle tax refund. Is this a scam?

The Driver and Vehicle Licensing Agency (DVLA) says that it has received a number of reports of this email, which it did not send, and confirms that it is a scam.

Its advice is to delete the message. Do not follow the link.

It says if it was issuing a tax refund, it wouldn’t ask you for any personal details, as the refund would be paid automatically into your account.

Several years ago, I bought a Braun Series 3 electric shaver, which is the only razor I have found that doesn’t irritate my skin condition. It broke in December.

I called Braun and was told that it would send out a replacement part within 14 days if I made a one-off payment of £37.

I sent a cheque the following week but, three months later, I’m still waiting and haven’t been able to shave comfortably in that time.

Braun apologises for the delay in sending you the part and has arranged for a replacement to be couriered to you immediately.