The Australian owner of Homebase sold the DIY chain for just £1 yesterday – taking its losses since buying the firm two years ago to nearly £740 million.

In a humiliating retreat from the UK, Wesfarmers flogged the home improvement chain to turnaround specialist Hilco, which already owns HMV.

The deal brought the curtain down on one of the most disastrous retail acquisitions of all time and took Wesfarmers’ losses since buying Homebase for £340 million in 2016 to £738 million. 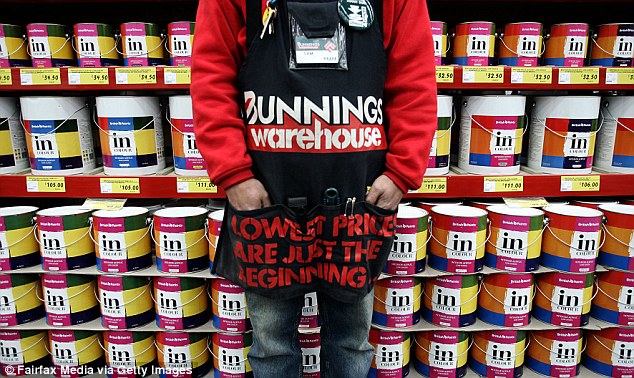 Signing off: In a humiliating retreat from the UK, Wesfarmers flogged the home improvement chain to turnaround specialist Hilco

Branding its foray into Britain ‘an unbelievable disaster’ for Wesfarmers, analysts accused the company of ‘woeful management decisions’ and ‘clumsy execution’.

The 24 outlets that were renamed Bunnings, which is Wesfarmers’ brand in Australia, will revert to Homebase.

Hilco is also thought to be planning to shut 60 Homebase stores, putting thousands of jobs at risk.

Wesfarmers had been planning to close 40 stores after its botched takeover alienated customers.

Managing director Rob Scott admitted the Australian firm had made mistakes, adding: ‘The investment has been disappointing, with problems arising from poor execution post-acquisition being compounded by a deterioration in the macro environment and retail sector in the UK.’

But the 48-year-old Australian was ridiculed when he seemingly tried to blame Brexit for his retreat from the UK. ‘Obviously the outlook has deteriorated post-Brexit,’ he said.

Analysts put the blame firmly on the Wesfarmers hierarchy.

Patrick O’Brien, UK retail research director at Globaldata, said Wesfarmers’ biggest mistake was its decision to get rid of the Homebase management team as soon as it took over the company in 2016 and replace them with Australians with no experience of running a UK retail business.

He added: ‘While the Australian company claims the macro-economic environment and difficult DIY market exacerbated its problems, there can be no doubt that it was its calamitous management decision-making that has led to its embarrassing retreat.

WHERE IT ALL WENT WRONG

‘The decision to get rid of all that local knowledge runs completely counter to everything retailers have been saying and doing over the last ten years – you must know your customer, and adjust your model to fit what they want. Instead, it thought it could impose its model on the UK consumer.’

Richard Lim, chief executive of Retail Economics, added: ‘The acquisition has been an unbelievable disaster for Wesfarmers.

‘Their attempts to disrupt the UK DIY market failed after a series of woeful management decisions, clumsy execution and a misguided perception of the UK market.’

Bunnings has a huge following Down Under, hosting ‘sausage sizzle’ barbeques at weekends.