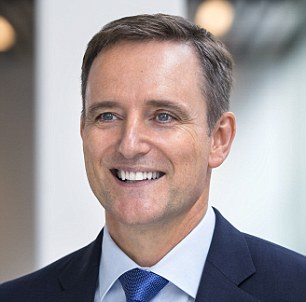 The insurance company proposed the idea of cancelling preference shares, as part of a plan to return £500 million to ordinary shareholders.

Preference shares pay fixed dividends of between eight and nine per cent and rank above ordinary share dividends in priority. Following Aviva’s decision the company’s share value dived by 1.36 per cent, to 497.15p, during morning trading.

In an announcement posted on the London Stock Exchange following the insurance company’s decision, Aviva chief executive Mark Wilson said: ‘I am very aware that Aviva is in a position of trust with our customers and investors. To maintain that trust it is critical that we listen to and act on feedback.

‘The reputation of Aviva and the trust people have in us, is paramount. Our announcement today means that preference shareholders can rest secure in their holdings.’

Wilson added: ‘The board and I have a duty to consider not just the financial implications of our actions. We must consider the impact to Aviva’s wider reputation. I hope our decision today goes some way to restoring that trust.’

The cancellation threat hung over four preference shares, two under the Aviva name and another two issued by General Accident, the car insurer which merged with Aviva predecessor Norwich Union in 2000.

All four shares experienced a dramatic slump in value of between 25 and 30 per cent, following the announcement to cancel them.

The insurance company said it will work on an alternative solution when the preference shares no longer count as regulatory or risk capital in 2026.

The insurance firm said: ‘Aviva will work towards obtaining regulatory approval for the preference shares, or a suitable substitute, to qualify as capital from 2026 onwards. ‘

The company added: ‘If as we approach 2026 Aviva needs to reconsider this position, it will do so after taking into account the fair market value of the preference shares at that time.

Aviva has said the decision to cancel preference shares was initiated as a result of the firm’s duty to examine what was right for the business, while balancing the interests of ordinary and preference shareholders.