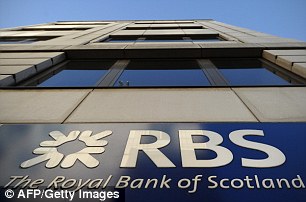 Sell-off: The British taxpayer holds a 70 per cent stake in Royal Bank of Scotland

Secret talks have begun about the sale of taxpayers’ 70 per cent stake in Royal Bank of Scotland – a decade after its £46billion bailout.

Brokers are said to have been approached by government officials looking to get the shares back into private hands.

The deal would be a huge milestone in the Natwest owner’s road to recovery, but the taxpayer is likely to take a loss of significantly more than £10billion.

RBS last week agreed to pay a £3.9billion fine to the US Department of Justice for mis-selling toxic mortgage-backed securities before the financial crisis.

The huge payout removes one of the final hangovers from RBS’s past and paves the way for the bank to at last restart dividend payments.