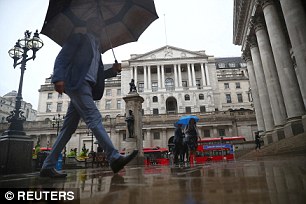 Borrowers should be able to breathe a sigh of relief this week with the Bank of England set to keep interest rates on hold.

The Bank, headed by Governor Mark Carney, last month raised the base rate for only the second time in a decade, taking it from 0.5 per cent to 0.75 per cent.

Analysts say it is unlikely to repeat the move at Thursday’s Monetary Policy Committee meeting, but the minutes will give an indication of any potential rate rises for the near future, which are likely to be influenced by Brexit developments over the coming months.

Analysts at investment bank RBC said: ‘Our expectation is that the Bank’s central message of ‘gradual and limited’ rate rises over the coming years will remain in place.’

Data out tomorrow is expected to show the economy grew 0.4 per cent in the three months to July, which would be the same rise as in the previous three months.