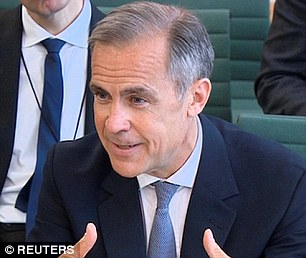 Grilling: Mark Carney is to be questioned about the number of women in top jobs at the Bank of England

Mark Carney will be hauled before Parliament to explain why there are so few women in top jobs at the Bank of England.

The 53-year-old governor faces a grilling from MPs on the Treasury Select Committee over what he plans to do to increase diversity.

The Bank has not had a female governor in its 324-year history, and its four deputy governors are men.

There is just one woman on the nine-strong monetary policy committee, which sets interest rates.

The last to be appointed, economist Jonathan Haskel, was the only man on a shortlist of five candidates for the job.

In a letter to Carney, Tory MP Nicky Morgan, chairman of the Treasury committee, said it was concerned about diversity in the Bank’s appointments.

It seemed ‘increasingly unlikely’ the Bank will hit its own target of having women fill 35 per centof senior management positions by 2020, she added.

Morgan said the select committee plans to question Carney over the issue when MPs return from Parliament’s summer recess.