Barclays will pay a £1.4billion penalty for mis- selling sub-prime US mortgage bonds that helped trigger the financial crisis more than a decade ago.

Jes Staley, the bank’s chief executive, last night settled with the US Department of Justice (DoJ) over billions in toxic housing debt it sold between 2005 and 2007.

The DoJ claimed that Barclays’ investment arm ’caused billions of dollars in losses to investors by engaging in a fraudulent scheme’.

Two senior bankers at the time of the scandal – Paul Menefee and John Carroll – will between them pay the DoJ a £1.4million penalty. 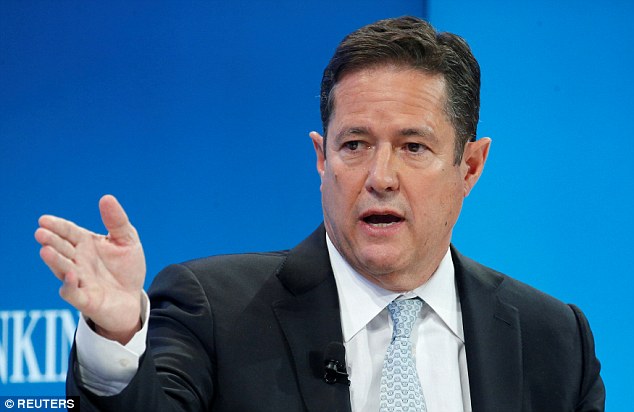 In a major victory for boss Jes Staley, the bank last night settled with the US Department of Justice over bundles of toxic housing debt it flogged between 2005 and 2007

The deal ends one of Barclays’ last hangovers from the financial crisis, and closes a long-running battle with American authorities. It also gives the bank a much-needed boost amid questions over its future direction.

It is thought the Americans demanded as much as £5billion in compensation for trades in toxic mortgage-backed securities, but Staley, who took over in 2015, refused to cut a deal and forced the DoJ to take legal action.

Last night he said: ‘I am pleased that we have been able to reach a fair and proportionate settlement with the Department of Justice.

‘It has been a priority for this management team from the start to resolve these historic issues in a timely and appropriate manner wherever possible.’

Barclays’ shares leapt as much as 1.3 per cent when the decision was revealed, on hopes it can start throwing off more cash to investors.

It is likely to relieve pressure on the lender after it was targeted by activist investor Edward Bramson – and will trigger fresh focus on Natwest owner Royal Bank of Scotland, the last big British lender with an outstanding DoJ case.

The payout, which will be reflected in Barclays’ results for the first three months of this year, probably hitting the bank’s profits, comes after it completed restructuring efforts last year by selling the last of £110billion of non-essential businesses.

Staley has overseen a radical transformation, pulling out of Africa after more than 90 years on the continent, to focus on growing the investment bank in the UK and US.

However, Barclays still faces a criminal prosecution in Britain over a 2008 deal with Qatari investors which prevented it needing a bailout from taxpayers – keeping the bank in private hands where politicians had no say over top bankers’ bonuses.

The Serious Fraud Office has pressed criminal charges against the lender and former senior executives, including ex-boss John Varley, claiming they illegally loaned Qatar money which it used to buy Barclays shares.

Varley and the other executives deny the claims. A trial date is set for late 2019 and Barclays has not yet entered a plea.

Staley is also facing an investigation by the Financial Conduct Authority after he broke City rules by attempting to unmask a whistleblower.

But despite these risks, the DoJ deal will give Barclays breathing space ahead of a battle with shareholder Bramson, who has built up a 5.2 per cent stake and become its fourth-largest shareholder.

A softly spoken New York-based investor with a fearsome reputation, he typically goes after underperforming companies where he can force himself on to the board and radically change their direction.

But Staley has always described a DoJ settlement as a key goal, and shareholders are more likely to support him in any future battle.

Investors are also a step closer to getting larger payouts. The bank plans to pay a 6.5p dividend this year and has promised a future share buy-back.

Staley added: ‘Barclays is well positioned to produce stronger earnings, and to start returning a greater proportion of those earnings to our shareholders.’

Hargreaves Lansdown analyst Laith Khalaf said: ‘There are still some regulatory hurdles for the bank to jump over, but this one is cleared now.’