Barratt Developments claimed it enjoyed an ‘outstanding’ year after swinging to a higher profit amid tougher times for the housing market.

David Thomas, Barratt’s chief executive, said: ‘As the UK’s largest housebuilder we are helping to address the country’s housing shortage – creating jobs and supporting economic growth whilst continuing to lead the industry in quality and customer service.’ 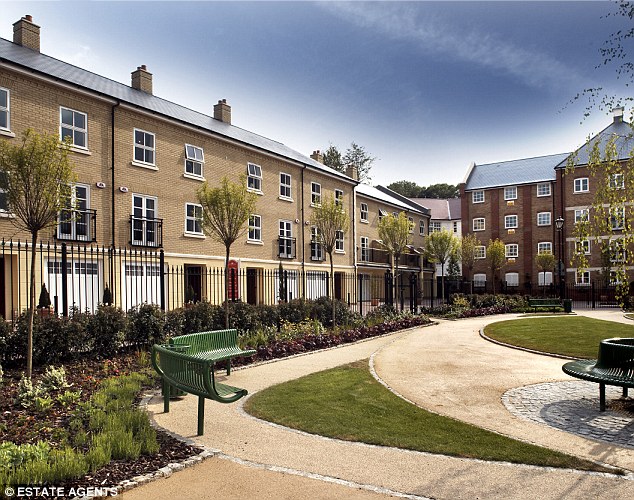 Growth: Barratt Developments claims it enjoyed an ‘outstanding’ year after swinging to a profit

Barratt said the availability of attractive mortgage finance and the government’s Help to Buy scheme continued to support ‘robust consumer demand’ across its business.

The Help to Buy scheme, which gives first-time buyers the chance to get on the housing ladder with a deposit of just 5 per cent, provided Barratt with 36 per cent of its sales in the last year, against 35 per cent a year earlier.

While the Help to Buy scheme was initially due to come to an end in 2016, in 2014, former chancellor George Osborne announced an extension to the Help to Buy Equity Loan scheme until 2020.

With Help to Buy schemes giving many housebuilders a balance-sheet boost, the sector is keen for the government to decide whether it will be extended further.

But, over the weekend it emerged that government ministers are set to launch a ‘fundamental review’ of the scheme that could see it replaced by one that better targets those struggling to get their foot on the property ladder.

Barratt’s chief executive Mr Thomas said: ‘If [ministers] want to continue to increase housebuilding, one would assume they would see Help to Buy as a good way to achieve that . . . it would be helpful if they could reach a decision on Help to Buy as soon as possible.’

Investors saw their annual dividend rise 5 per cent to 43.8p per share.

Neil Wilson, chief market analyst at CMC Markets, said: ‘Barratt continues to trade at something of a discount to peers – around 8 times forward earnings – after shares have fallen by around 20% in the last year.

‘But with a healthy dividend there to be had, there is yet some upside potential, albeit there may be softness today as the figures were well flagged back in July.

‘You can look to risks to the investment thesis from various angles – not least a radical rethink of housing strategy – but past performance by successive governments over the last 40 years doesn’t indicate we’ll see any real shift that should worry investors unduly.

‘However, the risk of a Labour-led government overhauling the sector is a consideration and is reflected in the discount we see applied to the sector.’

But, Richard Hunter, head of markets at Interactive Investor, cautioned: ‘With interest rates now potentially set on an upward curve and the economic outlook increasingly uncertain as Brexit negotiations falter, the sector is in the firing line. ‘In addition, rising construction costs and the possibility of any government withdrawal in its current quest to reduce the housing shortage in the UK cast long shadows. Any weakness in house prices is being seized upon and despite Barratts’ protestations, these factors are prevalent.’

Adopting a similarly cautious approach, Berkeley Group said in a trading update ahead of its annual general meeting today that although it is making billions in profit, the housing market ‘lacks urgency and London remains constrained by high transaction costs, restrictive income multiple limits on mortgage borrowing and prevailing economic uncertainty, accentuated by Brexit.’

Despite earlier warning of an annual dip in profits, today Berkeley backed previous guidance to deliver at least £3.4billion of pre-tax profits for the five years to 20 April 2021, with at least £1.6billion of profits over the two years to 30 April 2019.

Looking at the London market as a whole, Berkeley noted that overall transaction volumes were 19 per cent lower than two years ago.

In the period from May to August, Berkeley said it acquired five new sites.