An affordable British-built self-driving family car that can steer and brake by itself has been launched in the UK today by Japanese car giant Nissan.

It has fitted its school-run favourite Nissan Qashqai sports utility vehicle with advanced autonomous driving technology that until now has been the preserve of expensive luxury vehicles such as top of the range BMW and Mercedes-Benz models.

We were among the first to try the latest model – and the autonomous driving modes – on and off-road before it hits showrooms. 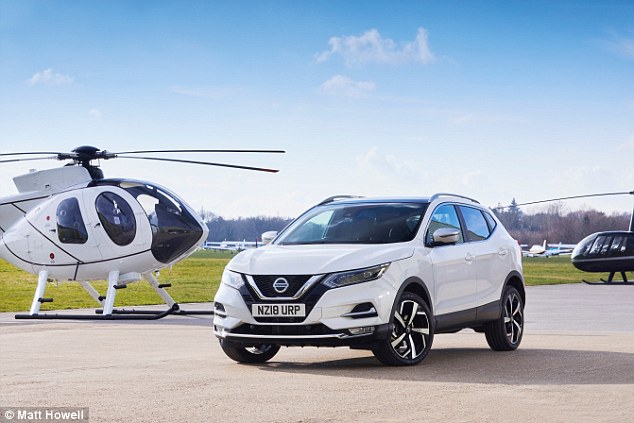 Britain’s first semi-autonomous car: The Sunderland-built Qashqai SUV will be the first UK-assembled model designed for families that will feature a host of new driverless tech

Equipped with Nissan’s new ‘ProPilot’ system, the smart Qashqai, built at its UK factory in Sunderland, can steer, accelerate and brake automatically using data supplied by a camera mounted on its windscreen and a radar behind badge on front grille.

Nissan stresses that its self-driving technology is currently there to aid the driver, not to take over from him or her.

It added that the system should help transform driving by making it ‘less stressful and more confident’.

However, even though the car can steer itself in highway lanes, for legal reasons until the law over self-driving cars is clarified and updated, Nissan insists that driver must keep their hands on the steering wheel at all times.

Drivers who do take their hands off the wheel for 10 seconds or more are given a series of visible and audible warnings to grip the wheel again which, if ignored, result in the car applying the brakes by itself to bring the vehicle to a halt in 30 seconds.

How does it feel? 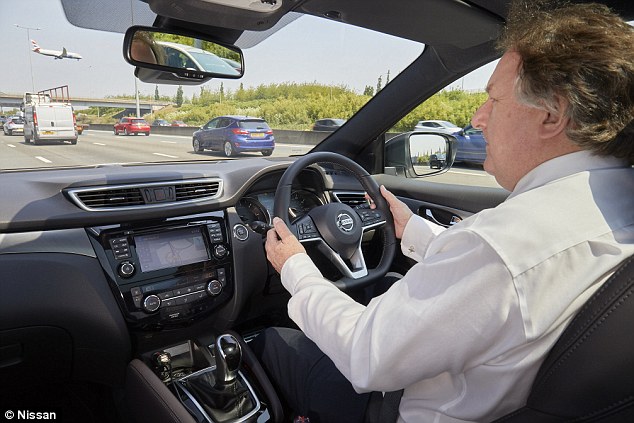 Daily Mail motoring editor Ray Massey was one of the first to try the new technology. When driving on the road, he had to keep his hands on the steering wheel at all times 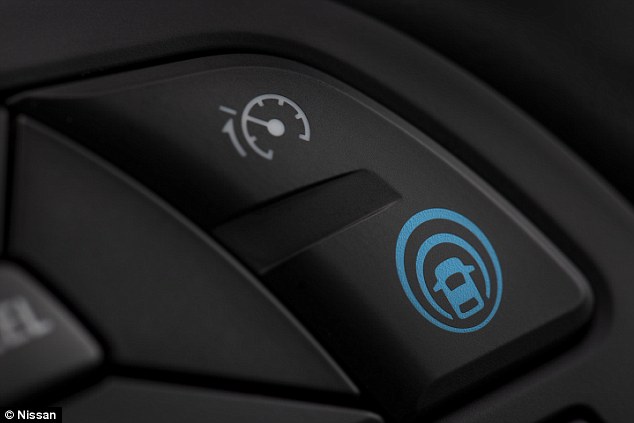 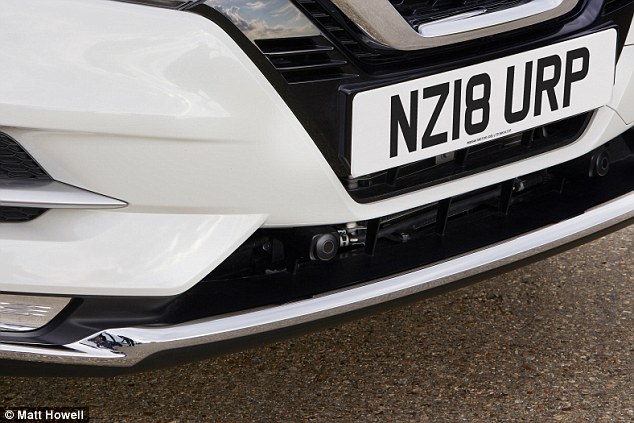 The car can steer, accelerate and brake automatically using data supplied by a camera mounted on its windscreen and a radar behind badge on front grille

A green driving wheel indicates that the system is live, while three green bars show the safety distance is set.

Driving for 30 miles around the M25 and along the M4 motorways, it is a rather strange sensation to feel the car itself wrest control of the steering and nudge you back into the centre of the carriageway if you begin to drift.

Ever so lightly holding the wheel, I felt it turn beneath my finger-tips as if possessed by some ghostly presence.

It nudged the car to the left and to the right as it drove around sweeping curves and long straight stretches alike.

As the cars or lorries in front slowed down, my Qashqai applied the brakes to maintain a safe distance while keeping a steady course. Another clever touch. 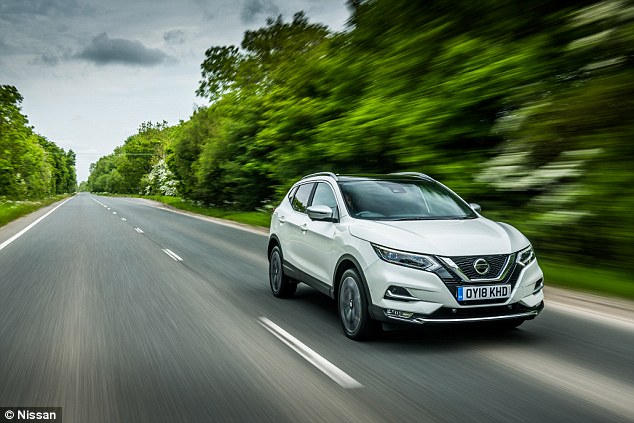 Nissan stresses that its self-driving technology is currently there to aid the driver, not to take over from him or her 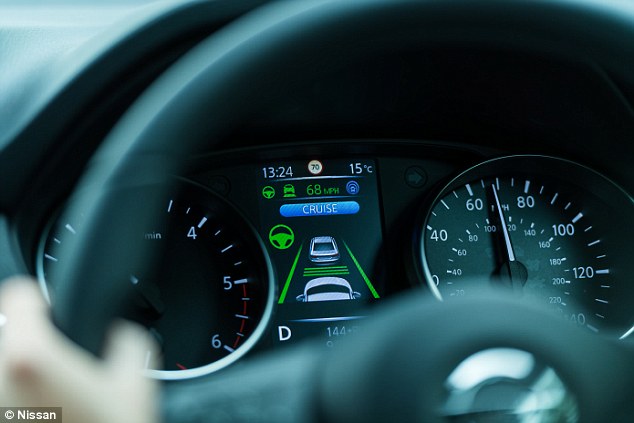 A green driving wheel indicates that the system is live, while three green bars show the safety distance is set 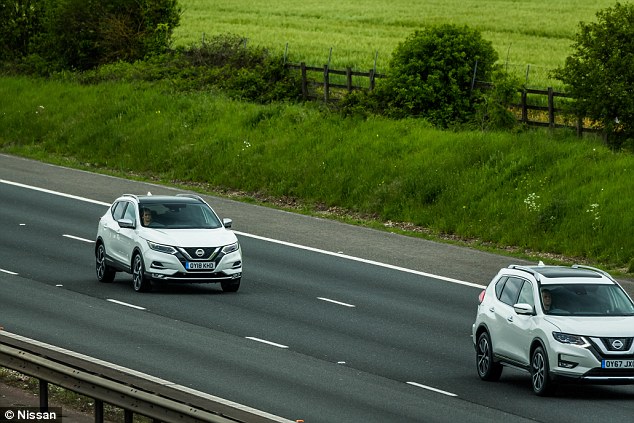 When I indicated right to overtake a slower moving vehicle in the inside lane, the car boosted the revs in anticipation of the manoeuvre to give me plenty of extra oomph to pass.

However, if you indicate left, it doesn’t add the revs because it will assume you are undertaking.

Throughout all of this it is pretty clear that the car is doing almost all the work.

Although my hands were lightly on the steering wheel, they were pretty superfluous.

It was the car itself doing the steering, though my mitts were in place to take full control if required.

The car slowed as we we approached jams, and sped up again as the roads cleared. It’s all impressive stuff.

What happens if you take your hands off the wheel completely? We tried it on private land to find out 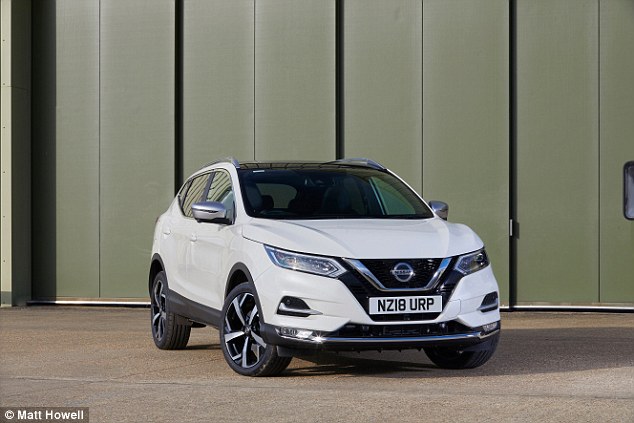 Taking the car onto private land, we put the ProPilot autonomous tech to the test to see what happens if a driver decides to take their hands off the steering wheel while on the move A series of alerts are followed by pulses of the brakes and finally the car coming to a halt, the handbrake being applied and the hazard lights flashing

Taking the Qashqai off public roads and onto private land however, I did experience what happens when you do take your hands off the wheel for more than the allocated period set by Nissan.

First, a visual warning of a red steering wheel starts to flash.

Will it fit in my garage? 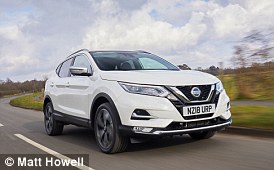 Then an audible alert kicks in with a klaxon-like tone that’s not dissimilar to a smartphone wake-up alarm call.

You then get a couple of short, sharp bumps from the brakes being automatically applied as a final warning.

This must feel similar to when some reckless drivers might dabs the brake pedal in an attempt to discourage tail-gaters riding too close to their rear bumper.

Keep ignoring all these warnings and it’s game over.

The car applies the brakes to bring it slowly to a full stop and applies the hand-brake with the hazard warning lights flash.

Not only is this a good safety measure, it could be useful if a driver falls asleep or collapses at the wheel.

Nissan said they chose the Qashqai to use the technology because it is the UK’s third biggest seller after the Ford Fiesta and Volkswagen Golf.

They believe it is the most user-friendly system on the market.

The system kicks in from speeds of 40mph and works both in daylight and at night.

There are limitations, however.

The system disengages if the white lane markings are faded, if there are light reflections from wet road surfaces, in heavy rain (when a fast windscreen wiper speed will cancel the steering assistance), and in a heavy build-up of snow or ice.

The next phase after working on single motorway and dual carriageway lanes – or single lanes with road markings to both the left and right, will be to extend the single lane system to work on multi lanes from later this year.

Cars that can drive their way around cities – including navigating roundabouts – will be next. 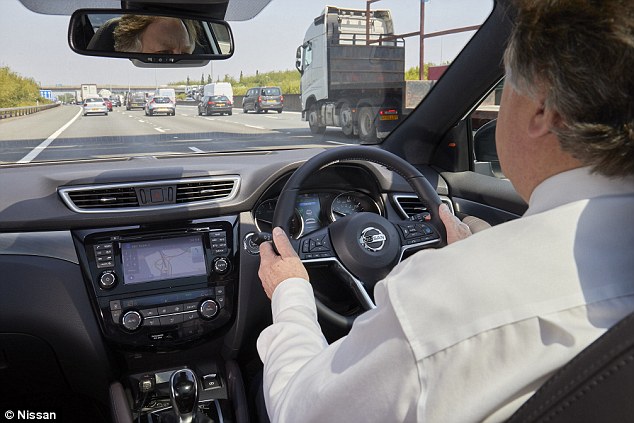 Ray Massey said you could feel the car doing almost all of the work, even if his hands remained on the wheel 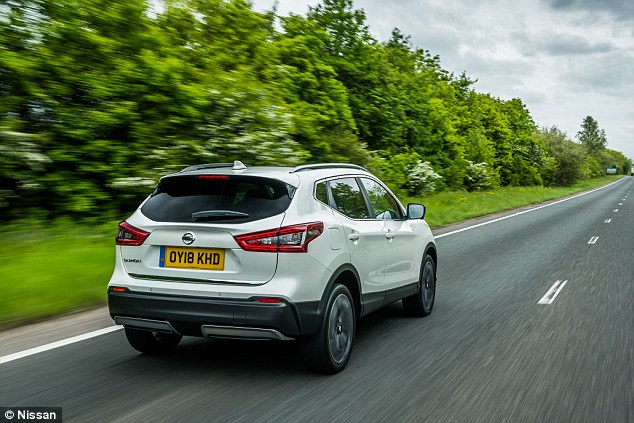 Nissan said ProPilot will be on 20 of its models by 2022 and acknowledged that it will be its ‘first step on the journey towards autonomous driving’.

Nissan Qashqais fitted with the ProPilot self-driving system are on sale now in cars starting from £31,327, or as a £795 optional extra.

And to mark the arrival of the ProPilot on Qashqai, Nissan is also launching a new range-topping Pilot One Edition based on the high-spec Tekna+ grade with a 1.6-litre diesel engine and priced from £33,425.

It features ProPilot as standard with additional features including Storm White Pearlescent paint, a premium Plum Nappa Leather Interior, sports pedals, and a chrome exterior styling pack. This is the car we had on test.

The Government is currently reviewing motoring law to take account of the opportunities and challenges thrown up by advancing autonomous technology surrounding self-driving cars.

It wants Britain to be the world capital for self-driving technology and a number of trials are currently underway in cities including Coventry, Milton Keynes and London, involving firms such as Jaguar Land Rover and Volvo, as well as Nissan.

Nissan employs more than 8,000 people in the UK, including at its Sunderland factory.

The Sunderland plant has built more than nine million vehicles since 1986 including more than 507,000 in 2016 – with 80 per cent exported worldwide and total investment topping £4billion.

Production of lithium-ion batteries for electric vehicles began there in 2012.

Suppliers and dealers take the total British jobs supported by Nissan to more than 40,000, it says.