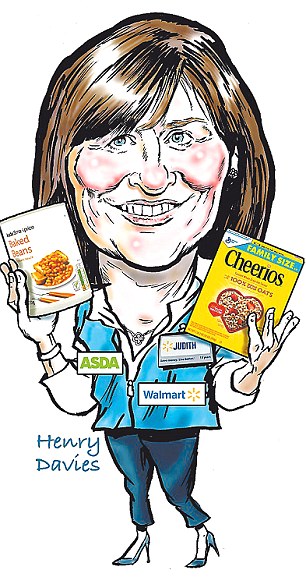 She was chief operating officer of Walmart-owned Asda at the time and wore a knock-off Alexander McQueen dress and £4 plastic engagement sparkler the supermarket’s clothing division had swiftly churned out after the Royal wedding.

With her girlish good looks and slightly bashful charm, the Yanks who’d made the pilgrimage to the A-State that day actually thought she was the real thing.

You may well not have heard of McKenna, but in the retail world she is almost royalty.

As chief executive of the International division of Walmart – which employs an astounding 2m staff across the globe – she is one of the most powerful women in British business.

The post is seen as a stepping stone to the top job at the retailer.

Walmart’s current boss Doug McMillon and his predecessor Mike Duke have both held the same position.

Should McKenna end up following in their footsteps she’ll be the biggest thing to have come out of Middlesbrough since Paul Daniels.

Reliable and efficient, she delivers dazzlingly on-message soundbites in her north-east lilt that suggests she’s spent a few hours with the media coach.

We’re likely to be hearing a lot more from her in the coming month as she’s heavily involved in Asda’s £12billion merger with Sainsbury’s, which is being given the once over by the competition watchdog.

‘Likeable’ seems to a popular adjective ascribed to down-to-earth Judith. ‘Steely’ is another. But you probably don’t rise to the top of the Walmart juggernaut without a bit of grit in the oyster.

McKenna’s parents were both schoolteachers and after studying at the local comprehensive, she took a law degree at Hull University before joining the graduate programme at KPMG in London.

After five years she took a position in the accounts department at the Tetley pub company which brought her back up north to Leeds.

Of the experience she once told Management Today: ‘You have to be able to stand up for yourself when you walk into a working men’s club and ask for a loan.’ 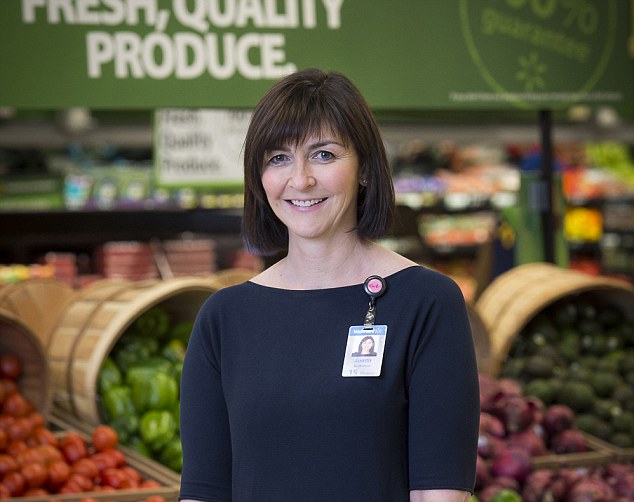 McKenna is heavily involved in Asda’s £12bn merger with Sainsbury’s, which is being given the once over by the competition watchdog

When Tetley announced it was relocating to Birmingham in 1996, McKenna didn’t fancy the move.

She got a call from Asda asking if she wanted to join the accounts team, which she was reluctant to take at first thinking she didn’t want to join a big company, but a job was a job.

She occupied various finance roles for a while, playing a part in the supermarket’s turnaround led by Archie Norman and Allan Leighton. Two years after Walmart bought the supermarket she was promoted to chief financial officer. In 2011, she was made chief operating officer.

Such was her meteoric rise, many were tipping her for the corner office. But the grocer’s parent company had much bigger plans for her. In 2013, Walmart moved her to America as chief operating officer.

Like all retailers, Walmart is suffering an existential threat from Amazon’s ceaseless expansion.

One of McKenna’s main tasks was to beef up the firm’s online strategy. After online sales grew steadily year-on-year, she was appointed international boss in January.

She met her husband Phil during her time at Asda. He was financial director, a job he later held at Matalan and Punch Taverns.

When the finance director job at Boots became available in 2005, they were both candidates.

Home is Bentonville, Arkansas and the couple have two children. Such has been her dogged commitment to work, McKenna only took eight weeks off when she had the first, and 12 the second, a decision she says she now regrets.

She’s anxious to see more women on boards but is against quotas or positive discrimination. No one wants to get anywhere just because of their gender, she reasons.

If McKenna lands the chief executive role at Walmart, she’ll have smashed the biggest glass ceiling of them all.