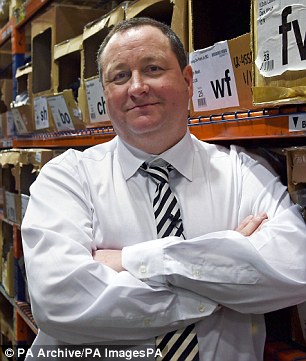 Sports Direct boss Mike Ashley got nothing for running the company for the second year in a row.

The 53-year-old, who is at number 58 on the Sunday Times Rich List with an estimated wealth of £2.4billion, has a 61per cent stake but he has forfeited his salary and bonus, and no dividend was paid.

During the year, about 2,000 of his employees shared around £45.5million in shares from an incentive scheme launched in 2011.

Profits fell to £77.5million during the year to the end of April compared to £272million the previous year.

Chairman Keith Hellawell said commentators portrayed Ashley as a pantomime villain, adding: ‘Since Mike became chief executive, the company has initiated a transformation to the benefit of all stakeholders.’