Britain’s boardrooms braced for barrage of protests from investors

Britain’s boardrooms are braced for a barrage of protests from investors this week with City heavyweights under fire for poor performance and super-sized bonuses.

The Mail on Sunday can reveal that water giant Severn Trent, embattled retailer Mothercare, train operator FirstGroup and online white goods retailer AO World are all set for a dressing down.

They join other major companies Royal Mail, TalkTalk and Premier Foods, which are in the firing line as giant pension funds and radical activist shareholders become increasingly unhappy about overpaid bosses and sleepy boards. 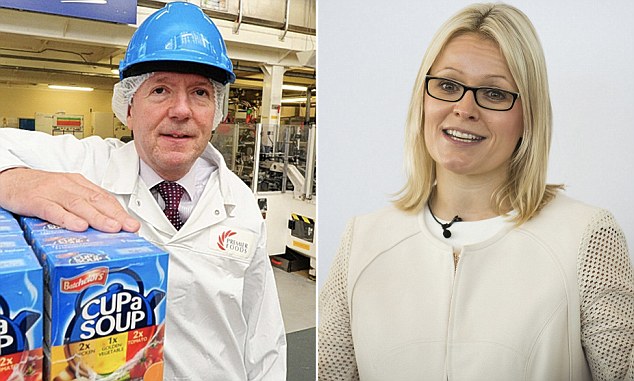 Gavin Darby, chief executive of Premier Foods, will this week learn his fate following an effort by activist investor Oasis Management to kick him out.

Oasis, which now has a 17.3 per cent stake, accuses Darby of turning Premier into a ‘zombie-like state’. Supporters of Darby believe he may cling on to power but critics say a close vote could leave his position untenable.

Severn Trent faces questions over bonuses to executives including Garfield. Governance group PIRC told investors to oppose the pay policy because its bonus schemes can pay out up to 350 per cent of salary, which amounts to £2.4 million for Garfield. A Severn Trent spokesman said pay was linked to performance and Garfield had improved customer service and reduced ‘external sewer flooding’. Mothercare is facing a revolt after shareholder advisers Glass Lewis urged investors to vote against its pay plans, saying executives could receive big payouts from a bonus scheme ‘based solely on share price performance, which may primarily reflect market forces rather than company or management performance’.

This follows restructuring plans involving shutting 60 stores, putting 900 jobs at risk. Property giant Hammerson is being stalked by activist investor Elliott, which is one of several US funds that has turned its sights on British firms. Pressure from Elliott recently led to Whitbread’s decision to spin off Costa Coffee. In the first half of 2018, 25 firms were publicly targeted by activist investors against just 36 for the whole of last year, according to data from Activist Insight.

One activist source said the tough economic climate has led some executives to ‘enter the bunker’ to avoid facing up to strategic issues, which has suppressed share prices, making them a target. Paul Kinrade, managing director at financial advisers Alvarez & Marsal, said traditional investment firms are also now backing activists. ‘Increasingly we’re finding institutional investors are privately joining in and calling the chairman saying, “We’re behind this, we think you should listen to these people.” ’

Kinrade added: ‘Before they were seen as barbarians at the gate. But now activism is becoming more acceptable in certain situations.’

Royal Mail is under fire for paying new chief executive Rico Back more money than the departing Moya Greene, who is set to receive a controversial £900,000 payoff.

Chris Hopkinson, at AO World, faces flak because his place on the audit committee clashes with his role as a director and a shareholder. South Western Railway owner FirstGroup is under pressure after ISS expressed concerns about lack of disclosure around financial targets for its bonus scheme. PIRC advised shareholders to vote against the remuneration policy. Activist investor West Face Capital wants to shake up FirstGroup after a failed takeover bid by private equity firm Apollo. And TalkTalk faces a revolt over a £200 million share sale.