The boss of BT has put his neck on the line as he unveiled a ruthless jobs cull and warned of two years in the doldrums.

Gavin Patterson announced yesterday that 13,000 jobs were being axed – mostly in management and administration.

His plan to cut £1.5billion of costs will also see BT leave its London headquarters next to St Paul’s Cathedral, with other offices also set to be ditched.

And the 50-year-old, who has been under fire since an accounting scandal in Italy last year cost the firm £500million, warned the group was not expected to grow revenues for two years. 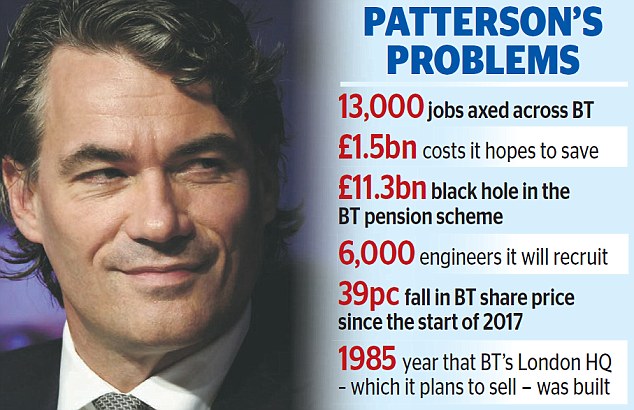 Gavin Patterson announced yesterday that 13,000 jobs were being axed – mostly in management and administration

Shares fell 7.4 per cent, wiping almost £2billion off its value. They have now dropped by more than 50 per cent in three years.

Dave Millett of broker Equinox said: ‘I cannot think of many chief executives that have survived that kind of share price drop, so the stakes are very high for Patterson now.

The big bets BT has made do not seem to be coming off at the moment, and the plans to overhaul the business still seem very unambitious.

‘Getting rid of so much of the workforce is a massive step and it is going to take time to turn the business around – he may find that he ends up being one of the 13,000 casualties.’

George Salmon, of Hargreaves Lansdown, said: ‘13,000 job cuts and a move out of central London are drastic actions and should help deliver cost savings.

‘But they still aren’t enough to dig BT out of the hole it’s in. Gavin Patterson will have his work cut out if he’s to steady the ship.’

And Russ Mould, investment director at AJ Bell, added: ‘Patterson will be under serious pressure to get this turnaround effort right.’

BT will be hiring 6,000 engineers and front line customer service staff as it embarks on a major upgrade of its broadband and mobile network.

Since taking over in 2013, Patterson has expanded BT into pay-TV and mobile services. But it has recently revealed a string of disappointing financial results.

Meanwhile, it is recovering from the £500million Italian accounting scandal, has been at loggerheads with regulator Ofcom over internet pricing and has been grappling with an £11.3billion black hole in its retirement fund.

The firm is also under pressure to invest billions of pounds in its broadband network, after complaints about reliability and speeds.

Mr Patterson insisted that the changes announced yesterday would help BT get back on its feet.

He said: ‘People will stop thinking about us just as a telephone company.’

The job cuts announced yesterday were the biggest since 10,000 staff left the business between 2008 and 2009.

BT also pledged that by 2020 it would hand over £4billion to help fill its pension scheme black hole of £11.3billion.

And Openreach, its infrastructure business, which also rents cables to rival telecom companies such as Talk Talk and Sky, is being legally separated from the company as part of efforts to improve customer service. It will still be owned by BT.