The retailer built by billionaire brothers Simon and Bobby Arora, is opening a 1m sq ft factory in Bedford as it plots its assault on regions like Kent and Essex.

B&M said it plans to open a store a week over the next few years, with the majority of these in the South East. It currently has 576 stores but wants 950 across the UK. 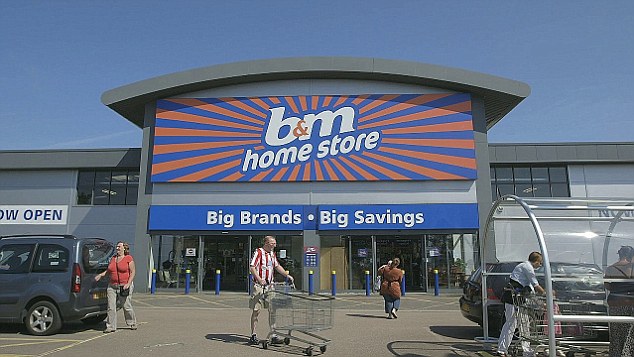 B&M, which was built by billionaire brothers Simon and Bobby Arora, is opening a one million sq ft factory in Bedford as it plots its assault on south east regions

The chain, which has a massive presence in the north, sells well-known brands like Kellogg’s, Coca-Cola and Heinz at a discount. It also sells a wide range of budget home and garden products.

B&M chief executive Simon Arora said it wanted to replicate Aldi and Lidl’s success in the non-food sector: ‘We want to be to homeware, DIY, toys and stationery what Aldi and Lidl have been to the grocery sector,’ he said.

It was bought by Simon and Bobby Arora in 2004

B&M sells everything from barbecues and wallpaper to frozen pizzas

It employs 30,000 people across its 937 storesB&M also owns Jawoll in Germany and frozen food chain Heron

The Arora brothers are worth £2.3billion and recently overtook Sir Philip Green in the Sunday Times Rich List

Its shares have increased 33 per cent since it listed in 2014 and it is now worth £3.9billion.

Arora, 48, said that shoppers in the south east were more likely to splash out on a £100 patio set compared to a cheap tube of toothpaste or box of cornflakes.

‘Our stores in the South East are actually more profitable on average than the rest of the country,’ he said

Arora said B&M has been buying stores up from struggling retailers like Homebase, Mothercare and Marks & Spencer.

He said he was also keen on snapping up some sites left by Sainsbury’s and Asda if the pair get the green light on their £14.1billion merger.

Its expansion plans come as revenues soared to just shy of £3billion last year, an increase of 22.4 per cent. Profits at the group increased 23.6 per cent to £226.1million.

The business was built by Arora and his brother Bobby, 46, who is trading director.

The two brothers, and younger sibling Robin, 33, are now worth £2.3billion.