A housebuilder whose boss was dubbed ‘Mr £131million’ over the potential size of his bonus has beefed up its pay committee as it battles to draw a line under the row.

The move comes days before chief executive Jeff Fairburn is handed the final tranche of a bumper bonus that at one stage was worth £131million. 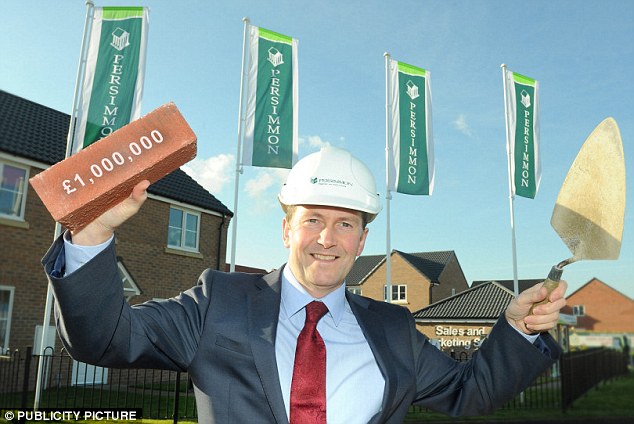 Pay shock: Persimmon boss Jeff Fairburn will soon be handed the final tranche of a bumper bonus that at one stage was worth £131m

The payment will trigger a share award to 52-year-old Fairburn worth £37million under a controversial long-term bonus scheme agreed in 2012.

Persimmon has faced a fierce backlash over the scheme that will see 133 managers share hundreds of millions of pounds.

Critics claim Persimmon’s success is partially down to the Government’s Help to Buy scheme, which aids Britons buying their first home.

Labour MP Rachel Reeves, chairman of the House of Commons business committee, this month said executive pay at Persimmon was ‘a tale of corporate greed and incompetent pay management financed on the back of a taxpayer-funded housing scheme’.

The firm’s shareholders have grown concerned over the sheer scale of the bonuses and damage to the company’s reputation.

Devlin, who is also chairman of William Hill, joined Persimmon this month and will be paid £300,000 a year.

Kentleton, 49, is finance director of PayPoint and has been on the Persimmon board since 2015. A qualified accountant, she has also worked for a range of firms including EasyJet, Natwest and Unilever.

Almost 15 per cent of investors voted against a pay report yesterday at the company’s annual general meeting.

They had been urged to rebel by influential advisor the Pensions and Investment Research Consultants.

It comes after a revolt last year when one in five shareholders voted against Cowgill’s 10 per cent rise in salary.