Dixons Carphone has said it will shut 92 Carphone Warehouse standalone stores over the next 12 months as it grapples with changing consumer habits and tough high street trading conditions.

The news comes as the retailer also warned of a sharp fall in profits this year.

The mobile phone and electrical goods retailer said profits this financial year are expected to be £300m, well down from the £382m booked last year. 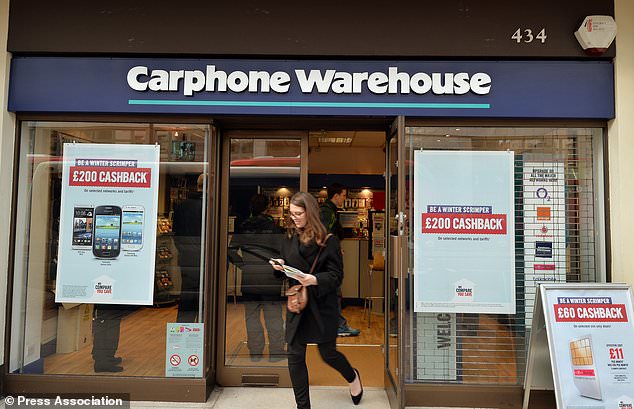 92 Carphone Warehouse stores are to close

The firm insisted that no jobs will be lost despite the closures, as staff will be offered the chance to move to larger stores nearby.

Dixons Carphone said total revenue rose 3% in the year to April 16, while like for like sales were up 4%.

In the UK, comparable revenue grew 2% and was up 1% in the fourth quarter.

The overall growth was propped up by its international division, with like for like sales in the Nordics up 9% in the year and up 11% in Greece.

The company said it has been hit by consumers holding on to older phones for longer rather than upgrading, or going ‘sim-only.’

‘In electricals, we’re focused on gross margin recovery. In mobile, we’re stabilising our performance through improvements to our proposition and network agreements.

‘In both, we’ll work hard to improve our cost efficiency. We won’t tolerate our current performance in mobile, or as a group. We know we can do a lot better.’

The store closures will add to the pain on the high street, with Dixons Carphone adding its name to the long list of retailers – Carpetright, Mothercare, Byron and others – to have closed stores.

Baldock added that he is renegotiating contracts at Carphone Warehouse with the aim of ‘improving our business model’, while also pointing to a difficult electricals market.

Neil Wilson, chief market analyst at Markets.com, said: ‘What can only be described as a nasty little profits warning from Dixons Carphone this morning.

‘Grim for sure but, as new boss Alex Baldock points out, it’s all entirely fixable.

‘Management warn of contraction in the UK electricals market as well as some cost increases, notably from higher labour costs as a result of the increase in National Living Wage.

‘Dixons looks a bit flabby, and the market is just as soft, but there should be some easy wins in terms of making it leaner, especially around store closures.’