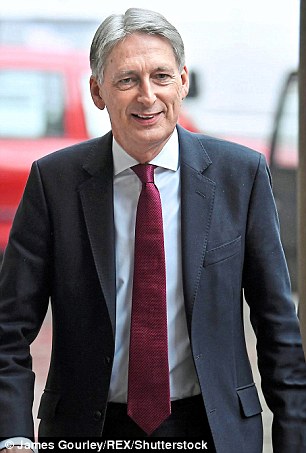 Britain’s economy is set to confound the sceptics as the country leaves the EU, Philip Hammond will declare today

Philip Hammond will pledge to build for Brexit today as he trumpets higher growth forecasts and lower government borrowing.

The Chancellor will seize on good news on the economy and tax revenues to set out an optimistic vision for the UK’s future.

In the latest blow for Project Fear, the OBR is expected to upgrade its predictions for UK plc and say debt will be below estimates.

But while the Chancellor will hail the fact that Britain is back in the black on day-to-day spending and insist there is ‘light at the end of the tunnel’ for the country, he will stop short of calling an end to austerity.

There are also not expected to be any firm commitments to boost spending on the NHS, despite calls from across parties.

The intervention comes in the Spring Statement.

However, for the first time in decades the event is not a full fiscal package – as the Budget has been moved to the end of the year.

Instead Mr Hammond is only giving a brief 15-minute update to Parliament on the economy and public finances.

The passionate Remain campaigner has refused to say in recent days if leaving the bloc will be ‘worth it’.

But he is said to have been struck by the resilience of the UK economy since the EU referendum.

Last November, a hole was knocked in Mr Hammond’s plans when the Office for Budget Responsibility slashed its predictions for growth.

But the OBR is set to upgrade its forecasts today with public borrowing expected to be sharply down and tax revenues up.

The OBR said last month it expected borrowing in 2017/18 to undershoot its previous prediction by a ‘significant’ margin.

The figure is now thought likely to come in around £43billion, rather than the £49.9 billion forecast in November, delivering a knock-on boost to subsequent years.

Speaking at the weekend, Mr Hammond cautioned that, at 86.5 per cent of GDP, Britain’s national debt remains ‘higher than the safe level’. 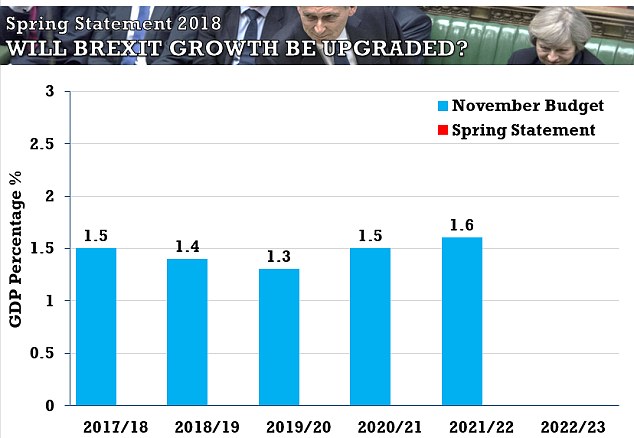 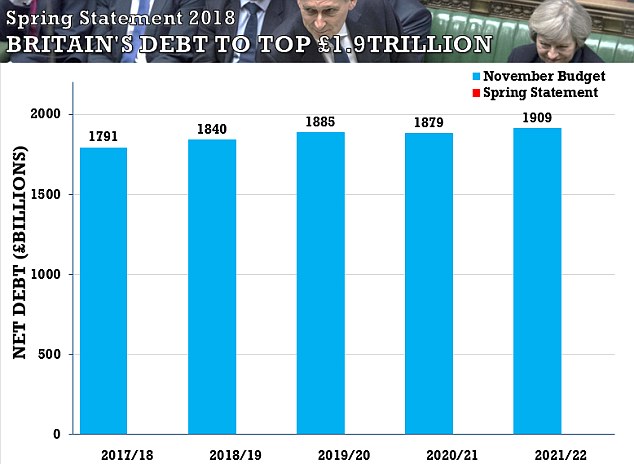 ‘There is light at the end of the tunnel because what we are about to see is debt starting to fall after it has been growing for 17 continuous years,’ said the Chancellor.

‘That is a very important moment for us but we are still in the tunnel at the moment.’

Labour has called on the Chancellor to use the statement to declare a halt to austerity measures and ‘end the financial crisis in our public sector’.

The Chancellor will also confirm that day-to-day government spending is in the black for the first time since the 2008 financial crisis.

Entrepreneurs and small business owners look set to benefit from an overhaul in the VAT system which Philip Hammond is due to announce today.

The system would lead to a gradual introduction of VAT on businesses with an annual turnover of more than £85,000.

According to The Daily Telegraph, Mr Hammond has said he wants to introduce 20 per cent VAT above £85,000 in ‘steps’. There is a ‘cliff edge’ in the current system which means that businesses are hit with a sudden bill if their turnover goes over the £85,000 threshold.

It means companies try to stay below the limit because they do not have an incentive to risk narrowing their profit margins.

However, he will warn there can be no easing up on spending cuts while Britain is saddled with a national debt approaching £2trillion.

Nick Timothy, Theresa May’s former joint chief of staff, has urged the Chancellor to announce the ‘end of austerity’.

But Nicky Morgan, chairman of the Commons Treasury committee, said this would be premature.

On the Conservative Home website yesterday, she wrote: ‘If we relax too much then we undermine our criticism of the last Labour Government for not ‘fixing the roof while the sun shines’.’

Mr Hammonnd’s Treasury deputy Liz Truss has said there will be ‘no red box, no rabbits out of the hat and no tax changes’.

Although Mr Hammond will not be making tax or spending announcements, he is set to reveal consultations with far-reaching effects.

These include a review to consider if single-use plastics and chewing gum should be taxed while the long-term impact of an ageing society will be examined.

Tory MPs also want more cash for defence and the Chancellor has acknowledged ‘pressures’ in this area.

He will, however, risk re-opening a row about the treatment of small business when he confirms plans to review VAT rules.

But the Chancellor will ask officials to look at tapering the need to register VAT to avoid an immediate bill of £17,000 for firms going through the £85,000 barrier. 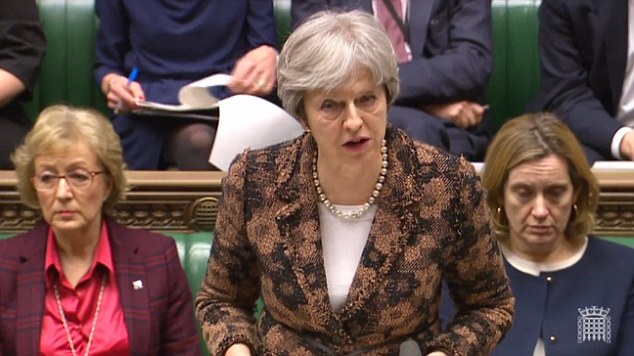