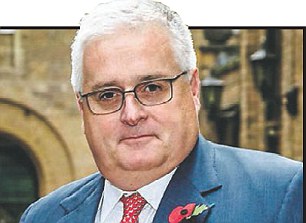 Why the hostility? Perhaps a recent expenses crackdown is to blame. As well as being banned for claiming for black taxi cabs, staff were told to spend no more than £80 on a bottle of wine when entertaining clients. Disgraceful, but there it is.

BT shareholders voiced their displeasure with boss Gavin Patterson at yesterday’s AGM with 34 per cent voting against his £2.3million pay package.

Gav, 50, and his management team hardly endeared themselves by arranging the meeting in Edinburgh.

With the biggest match in English football for 28 years starting at 7pm, attendees were left scrambling to make it South in time for kick-off.

The board of Goldman Sachs meets in autumn to discuss Lloyd Blankfein’s expected departure before the end of the year.

With Blankfein’s baldylocks deputy David Solomon, 56, nailed-on as his successor, attention turns as to who’ll be number two.

London chief Richard Gnodde, 57, is in the frame, though his suave appearance and full head of hair may prove a minus point.

Goldman tends to appoint executives who look as though they’ve been gleaned from the FBI’s ‘Most Wanted’ list.

Credit Suisse chief Tidjane Thiam has assigned his human resources director Antoinette Poschung to the new role of Conduct and Ethics Ombudswoman. The appointment is timely.

One of Credit Suisse’s senior bankers, Paul Dexter, recently departed following allegations of inappropriateness which reportedly included locking an intern in an office and giving another an ‘uncomfortable’ massage in front of her colleagues. Amazing these creeps find time to work.

Recruitment firm Glassdoor reveals the most irritating office jargon. ‘Touch base’ comes out top followed by the equally ghastly ‘No brainer’.

In third place is ‘punch a puppy’, which means doing something horrible for the greater good.

Sample use: ‘When is Banco Sabadell going to punch a puppy and finally get rid of hapless TSB boss Paul Pester?’