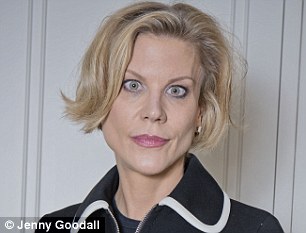 Glamourpuss financier Amanda Staveley’s proposed takeover of Newcastle United FC is officially dead in the water, according to sources.

While Bambi-eyed Amanda, 45, will be disappointed not to have pulled off the £400million deal, I’m told she won’t miss dealing with the club’s owner, pot-bellied tracksuit tycoon Mike Ashley, 53, whose negotiating style could be far from orthodox.

Particularly after he had enjoyed a good lunch.

Marillyn Hewson, boss of the world’s largest arms manufacturer Lockheed Martin, has been named CEO of the year by her American peers.

The redoubtable mother-of-two, 64, whose annual remuneration bounces around the £20million mark, is one of the business world’s leading power players, though sadly not one of its sparklers.

A guest who witnessed Hewson’s recent keynote speech at the Royal Aeronautical Society dinner in London’s Piccadilly groans: ‘Talk about shock and bore!’

A BP colleague recently claimed Mississippi Bob, 62, was forced to flee Moscow in 2011 after he was poisoned by one the President’s goons.

With that in mind, were we unduly hasty in criticising Dudley’s £15million-a-year pay packet?

If Thomas’s name is familiar that is because he used to be a top bod at the BBC where he was seen as a future director-general.

His Leftish, pro-EU views are said to go down well with the Chancellor of Oxford, his old BBC chairman Chris Patten.

A report making the economic case for an independent Scotland entitled ‘The New Case for Optimism’ will be unveiled by first minister Nicola Sturgeon on Friday.

The bulky, 354-page dossier was drawn up by Andrew Wilson, 48, an owlish economist who previously served as trusted adviser to Fred Goodwin at Royal Bank of Scotland.