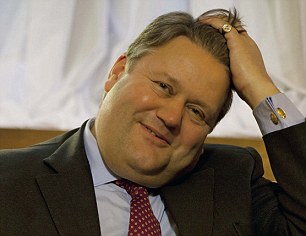 Cheers: Raytheon has appointed Lord Strathclyde, 58, as its UK chairman

Defence firm Raytheon has appointed former leader of the House of Lords Lord Strathclyde, 58, as its UK chairman.

Tubby Tom’s gain – he enjoys a thriving post-political business career with eight other City advisory roles – is the Upper House’s loss, where his constitutional expertise is as missed as his hospitality.

Visitors to his parliamentary office were habitually furnished with generous tumblers of Famous Grouse whisky.

Not least as both are habitués of White’s Club, where members are expected to behave cordially towards one another.

Perhaps Crispin, 59, isn’t popular at the St James’s hovel. I’m told he was granted membership at the second attempt.

Critics are praising his first effort, the 2014 Rathfinny Blancs de Blancs, that his old City chums will soon be guzzling by the bucket load.

The £37 fizz has just been snapped up by those expense-account favourites, Annabel’s, Scott’s and Le Gavroche.

Stockpicking guru Andy Brown, 62, whose wealth is put at £550million, was described over the weekend as ‘Britain’s Buffett’.

The flattering epithet is also regularly assigned to his fellow superstar investors Nigel Wray, 69 (£300million) and Neil Woodford, 58 (£100million), though, frankly, none are in the same league as the legendary ‘Sage of Omaha’.

With £63billion already in the bank, Warren Buffett, 87, earns more in a year than the trio’s combined wealth.

It was nice to see that BT boss Gavin Patterson put on a neck tie for his visit to Downing Street yesterday, where Mrs May briefed him on Brexit.

Not much of a tie man, Gav. The 50-year-old has usually got more shirt buttons undone than J-Lo.