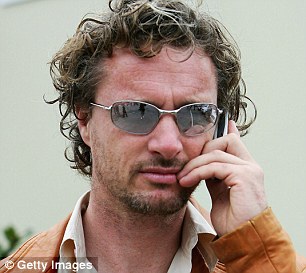 Manque ex-Formula One driver Eddie Irvine hosts a Q&A with representatives from the city of Belfast, discussing his post-driving foray into the property business.

The Northern Irish have brought with them a DeLorean, the sports car made famous by the Back to the Future films, which they’ve converted to run on electricity.

Organisers planned for fast Eddie, 52, to perform donuts and U-turns but the spoilsport Cannes authorities have issued a strict ‘non’.

If any delegate’s wondering where their metallic blue Rolls-Royce Dawn (a snip at £275,000) they left outside the conference centre: I witnessed it being impounded.

Picture the rictus grin across the tow truck man’s face as he hoisted his catch like a ten-foot marlin.

Plenty of Ferraris and Lamborghinis along the main drag, but the most beautiful motor car belongs to stylish Progressive Property boss Mark Homer, who’s driven a silver 1958 Mercedes SL down the Cote d’Azur from Nice.

Homer, 38, spent most of yesterday morning cruisin’ up and down the Croisette with the top down, but he insists he wasn’t showing off.

With Cannes rammed, he just couldn’t find anywhere to park.

Oily delegates are wearing pink badges with an elephant logo, which is supposed to represent the ‘elephant in the room’, a reference to the recent shenanigans at the Presidents Club.

Must say I’m not seeing much of this new-found solidarity as the first Kronenbourg is poured at 10am.

As the actor Roland Curram exclaimed while filming the 1958 movie version of Dunkirk: ‘Oh my dear, the noise, the people!’

Best evening revelry is confined to the monster gin palaces lining the marina. Since everyone’s on modest(ish) behaviour this year, no-one’s ended up overboard yet.

Rakish asset manager Adam Murray, 37, had to fish him out of the murky foam.