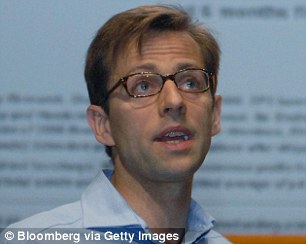 Officials warn it’s a short-term role, meaning bustling Van Steenis, 48, will be in post no longer than nine months so will enjoy an even briefer public service career than his wife, social justice champion Camilla Cavendish, 49.

She lasted barely a year as David Cameron’s policy head before finding herself out of a job.

Glamorous, twice-married Andrea, 60, was a regular on ‘worst CEO’ lists while at Avon, but now runs a non-profit organisation for low-income women and is friendly with Michelle Obama. So pure catnip to the right-on luvvies at Unilever.

Barclays is on the hunt for a new chairman to replace John McFarlane. How about convivial Aberdeen Standard Life boss Martin Gilbert, 62?

A city veteran of over 30 years, he’s proved no slouch as acting Sky chairman dealing with the delicate 21st Century Fox/Comcast takeover negotiations.

Good egg McFarlane, 70, isn’t off until next year, which leaves plenty of time for Gilbert’s peculiar power-sharing arrangement with Keith Skeoch at Aberdeen to sour.

There was an interesting analysis of Tesla motorcars’ current woes on Radio 4 yesterday, delivered by an eloquent managing director from Evercore introduced as George Galliers.

Why not by his full name, George Galliers-Pratt? Perhaps George, 39, feels audiences would find the abbreviated version more palatable.